Hyundai has quickly been replacing or refreshing their car lineup, with a new for 2017 Elantra arriving earlier last year and the new Accent making its debut last month in Toronto. Now it's the Sonata's turn. The new model gets new styling, more tech, a new transmission for the 2.0 turbo, and possibly a new base engine.

This isn't an all-new car, but a heavy refresh of the current car. The nose gets Hyundai's new larger grille, with the corner vents changed from horizontal to vertical. There are new headlights as well, plus 2.0T models get a black mesh grille along with other black trim pieces. At the back are narrower taillights and a more sculpted trunk. The whole thing makes for a more stylish look than the mostly bland face of the current model.

Hyundai says that the center stack has been revised to be "more visually-striking." That consists of a revised console and storage pockets near the shifter, and some more premium looking materials on the dash. The audio and ventilation controls have been given piano key style buttons for an improved feel, and a 7.0-inch screen will be standard. That's standard on Korean models, at least, because Hyundai hasn't given the North American specs yet. The current Sonata comes with a 5.0-inch screen in base models, so the 7.0-inch screen seems likely. The cars get new, more sporty steering wheels with a flat-bottom for the 2.0T models. Those cars will also get sports seats and blue trim. 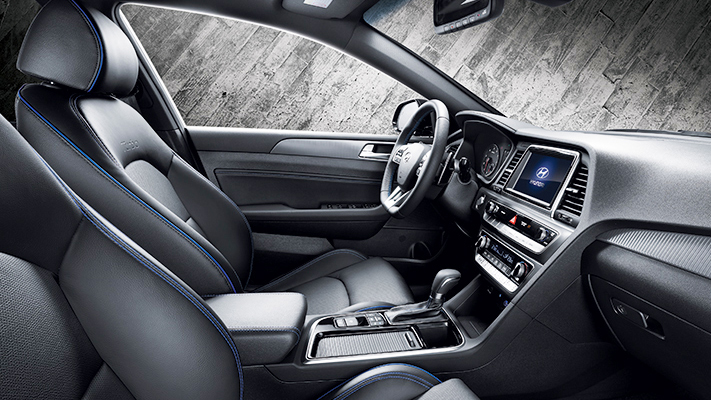 There's no mention of the 2.4L four-cylinder that currently powers Sonatas in North America as well as South Korea, so a 1.6L turbo-four making 180 hp that they do mention may become the new base engine. The 2.0L turbo-four in the top trim Turbo model is unchanged at 245 hp, but does get an eight-speed automatic replacing the six-speed in the current Sonata.

Hyundai says that the new Sonata will start to come to showrooms later this year in select markets, but there is no word on Canada's spot in the line. Expect a full reveal later this year, possibly at the New York International Auto Show in April.