An effective winter tire for the masses
Advertisement

An effective winter tire for the masses

Drivers may buy winter tires for their promise of improved grip when driving in snow and slush and on ice, but according to BF Goodrich's marketing machine, a winter tire's performance on clear pavement generates the most complaints from those drivers.

According to research done by BF Goodrich's parent company Michelin, the average Canadian does 20 percent of their winter driving in slippery stuff, but the tire contact patches see clear pavement – dry, wet or damp – the rest of the time. That may sound like ammunition for an argument against winter tires, but the takeaway for BF Goodrich was the need to design its new Winter T/A KSI winter tire to work better in snow, slush and ice than the outgoing Slalom KSI, while also offering good handling, strong braking and low noise on clear pavement.

That, says the company, was its biggest challenge. Set to reach the marketplace later this year, the new Winter T/A KSI replaces the well-known Winter Slalom KSI in the lucrative Tier 2 segment, which is where BFG says most winter tire buyers spend their money.

Not surprisingly, winter tire use varies widely across the country. According to the Tire and Rubber Association of Canada, their use is lowest in BC, which tends to enjoy the country's mildest winter conditions (the 2016–2017 season's uncharacteristically cold and snowy weather notwithstanding). Voluntary winter tire use is highest in the Maritimes, a jurisdiction outdone only by Quebec, which requires winter donuts on cars between December and April. In the middle is Ontario, where two-thirds of drivers use winter rubber. 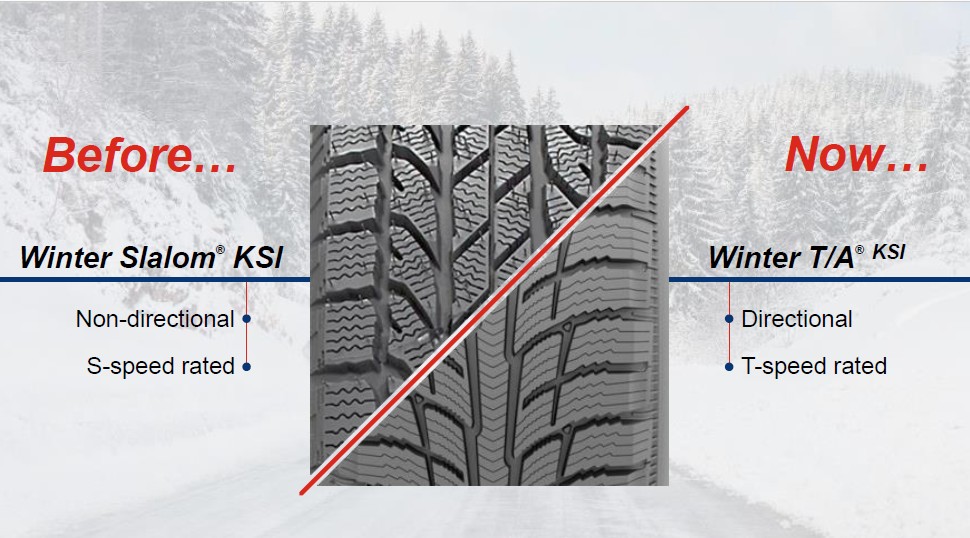 To let the media judge the effectiveness of its new tire, BF Goodrich staged a comparison test in Ottawa, a dicey proposition in March given that you never know which version of this capricious month you're going to get. As it turns out, BF Goodrich got both sides of March's split personality, spending their first day doing dealer product training in rainy, 10 degree weather, followed by two frigid, windy media days that felt like 20 below.

Given the comparative nature of the typical car-buying experience, it's ironic that automotive journalists rarely get the chance to directly compare competing products. While we typically test new cars one at a time, tire launch events are refreshing because the manufacturer rolling out its latest rubber almost always brings out examples of the tires it benchmarked when creating the new product.

We spent half a day on a wind-swept airfield driving brand new 2017 Mazda3 sedans and 2017 Honda CR-V crossovers fitted with the Winter T/A KSI as well as with the Toyo Observe GSi-5, Yokohama IceGuard iG52c and the Firestone Winterforce, to get a feel for how BF Goodrich's latest creation stacked up. 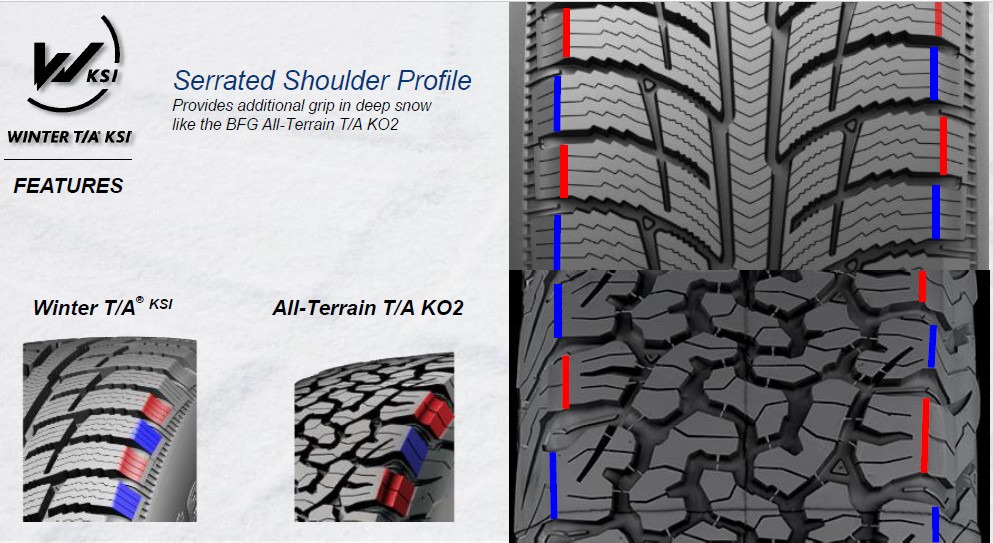 New tire designs aren't cooked up arbitrarily. Tread pattern and rubber compound are the big considerations, and BF Goodrich says it put a lot of thought into both when engineering the Winter T/A KSI. The company says its new compound comprises more silica (sand, essentially) to boost grip on ice while enhancing tread stability in warmer weather. The latter has proved to be a notable problem in past generations of modern winter tires, with their soft rubber compounds. Those tires tended to feel unsettled and "squirmy" in warm weather, one of the consumer complaints BFG's engineers sought to address with this new design.

Like other winter tires, the KSI has loads of zig-zag sipes that create edges to microscopically "bite" into ice and improve grip; here, those sipes also interlock to add desirable clear-road handling stability. The continuous centre rib is a common trick used to improve steering feel, and a serrated shoulder profile -- created by alternating tread blocks that vary in width -- is a trick BFG borrowed from its own All-Terrain T/A KO2 tire to add grip in deep snow and slush. The wide grooves between tread blocks are there to help force water and slush out of the tread so that it can grip the road beneath.

What the tests revealed

The test program involved three driving scenarios that pitted the new BFG tire against its competitors.

First up was a snowy handling course on which we tossed around Mazda3 sedans shod first with the Winter T/A KSI, and then with Yokohama IceGuards. 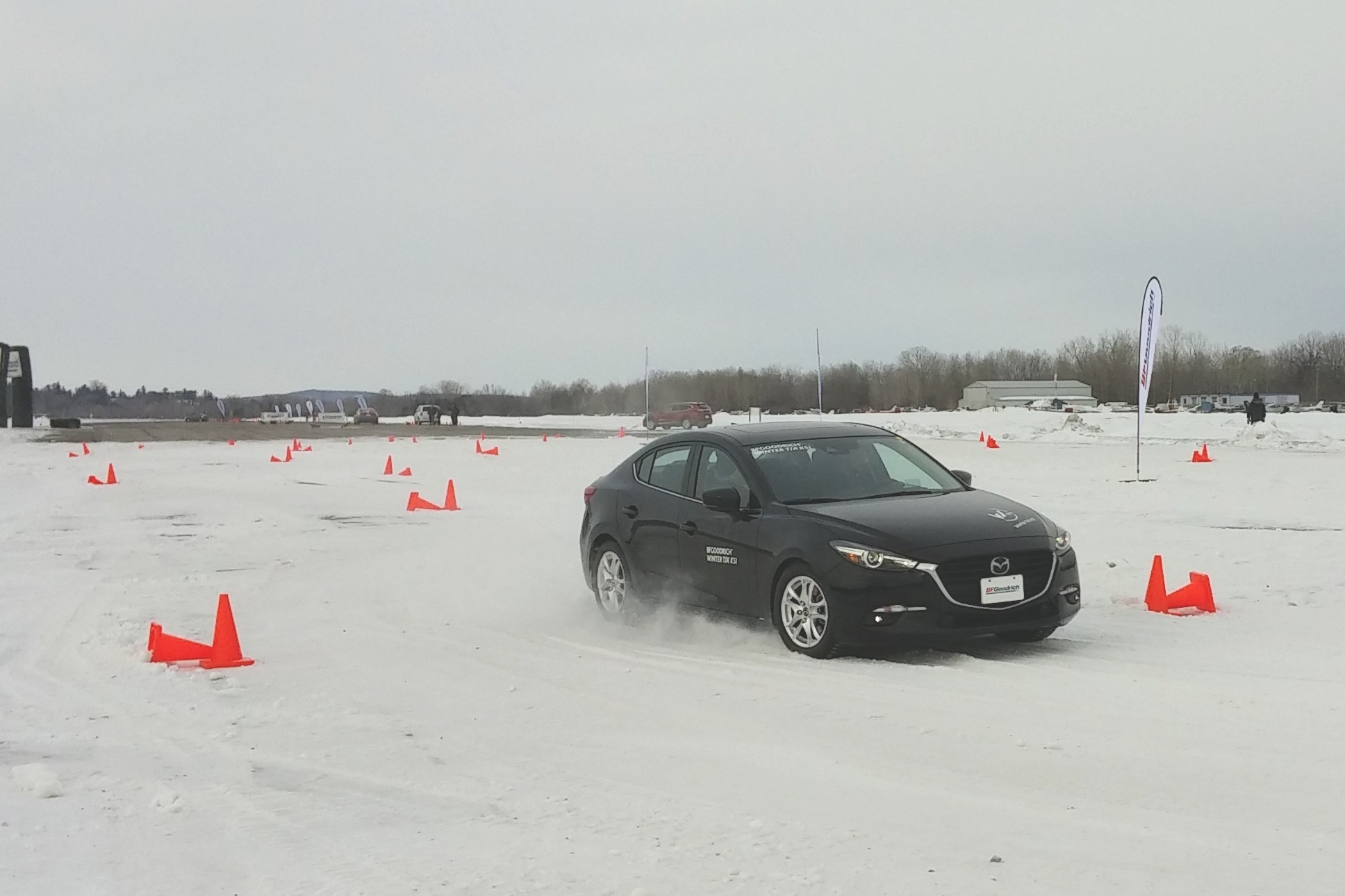 We did this test with the car's traction and stability control systems turned off, a scenario we felt would be unrealistic for the average driver. But for enthusiastic drivers like us who have had previous experience testing vehicle handling in controlled conditions, it was a good way to feel the differences in grip afforded by the tires alone, without any help from the car's electric safety systems.

We were encouraged to drive the course aggressively and use throttle and steering inputs to provoke oversteer in two slalom sections linking sweeping turns at either end of the course, where we were then challenged to combat the understeer condition inherent in trying to accelerate through a slippery curve. The Winter T/A KSI's notable advantage was that it more predictably maintained a better grip in the slalom sections. Ironically, we all agreed the course was more fun to drive on the Yokohamas, which allowed more oversteer in the slalom, but the BF Goodrich is the tire we'd recommend to more conservative drivers.

Test number two was an ice slalom course that we drove at a steady speed of about 30 km/h in Honda CR-Vs, one wearing the new KSI, the other riding on the Toyo Observe GSi-5. Both tires slid on the ice at initial turn-in, but the KSI was more progressive in regaining grip and helping to steer the car around the pylons. By contrast, the Toyo's responses were more abrupt and less consistent, lending the driver less confidence in getting the car back on track.

Our third test put us back into Mazda3 sedans, this time pitting the T/A KSI against the Firestone Winterforce in a straight-line ice braking test. This one required the least driving skill – all we had to do was hit the brakes at our instructor's signal – and revealed few seat-of-the-pants observations. But using GPS-based performance measuring devices, our driving instructors were able to compile stopping distances for the two tires. That data told the story, with the KSI stopping shorter, and in a smaller range of distances, than the Firestone tire. 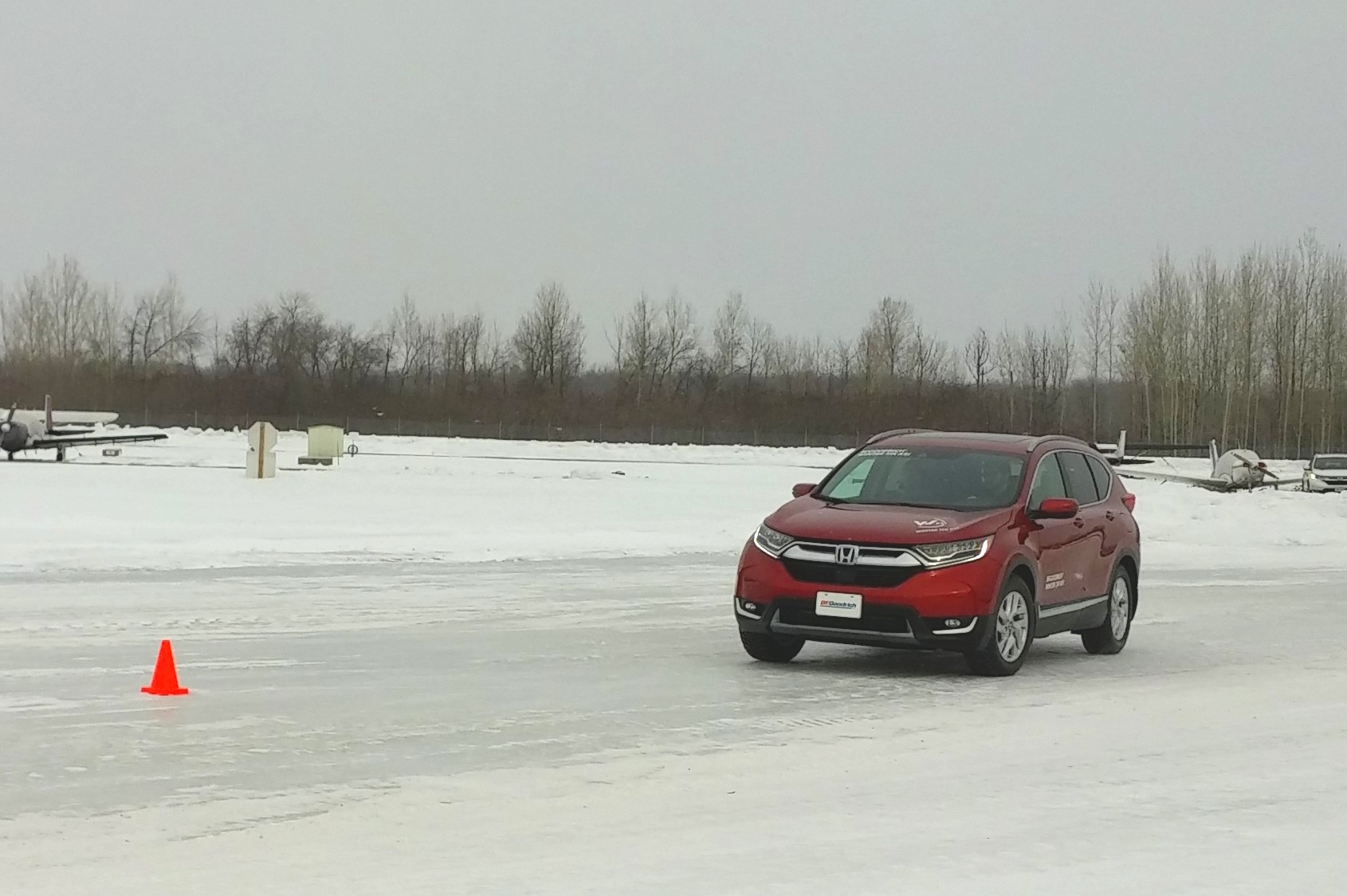 We didn't do any clear-road testing, but data compiled a day earlier, in that mild, rainy weather, revealed a similar result in the straight-line braking test. In the wet, the BF Goodrich tire stopped shorter and in a more repeatable pattern than the Firestone.

It's easy to assume a tire company will pit its latest product against those it feels are inferior, and that's true to a certain extent. BFG reps we talked to said the competitive tires it brought along to the test are among those it benchmarked when developing the Winter T/A KSI, so it made sense to use them for this comparison's sake.

We admit that we're happy to see Canadian drivers put winter tires on their car at all, whether they choose them for performance or price. But BF Goodrich feels that convincing more drivers to embrace the traction advantages of winter-specific tires will only work if the tires offer benefits in adverse conditions without significantly compromising performance on clear roads.

In that regard, we think the Winter T/A KSI will convince undecided drivers willing to take the plunge that winter tires are worth the expense. Its second-tier market placement means there are more expensive tires out there that will perform better in certain conditions, but this new BF Goodrich model performs well overall at what the company promises will be affordable mid-range pricing.

The BF Goodrich Winter T/A KSI goes on sale in September 2017, when it will be available in 32 common sizes, with six more joining the range in mid-2018, for a total of 14 new sizes compared to the outgoing Winter Slalom KSI. Prices will be announced closer to the sales launch.