All that’s hot in the world of two wheels
Advertisement

All that’s hot in the world of two wheels

If you’re a motorcyclist, 2017 is looking like a great year, especially if you’re looking to buy a new bike. Whether you’re a seasoned riding veteran or a novice fresh out of riding training, whether you’re on a student’s budget or have limitless moto-money, there are a number of new bikes that are worthy of your hard-earned dollars. 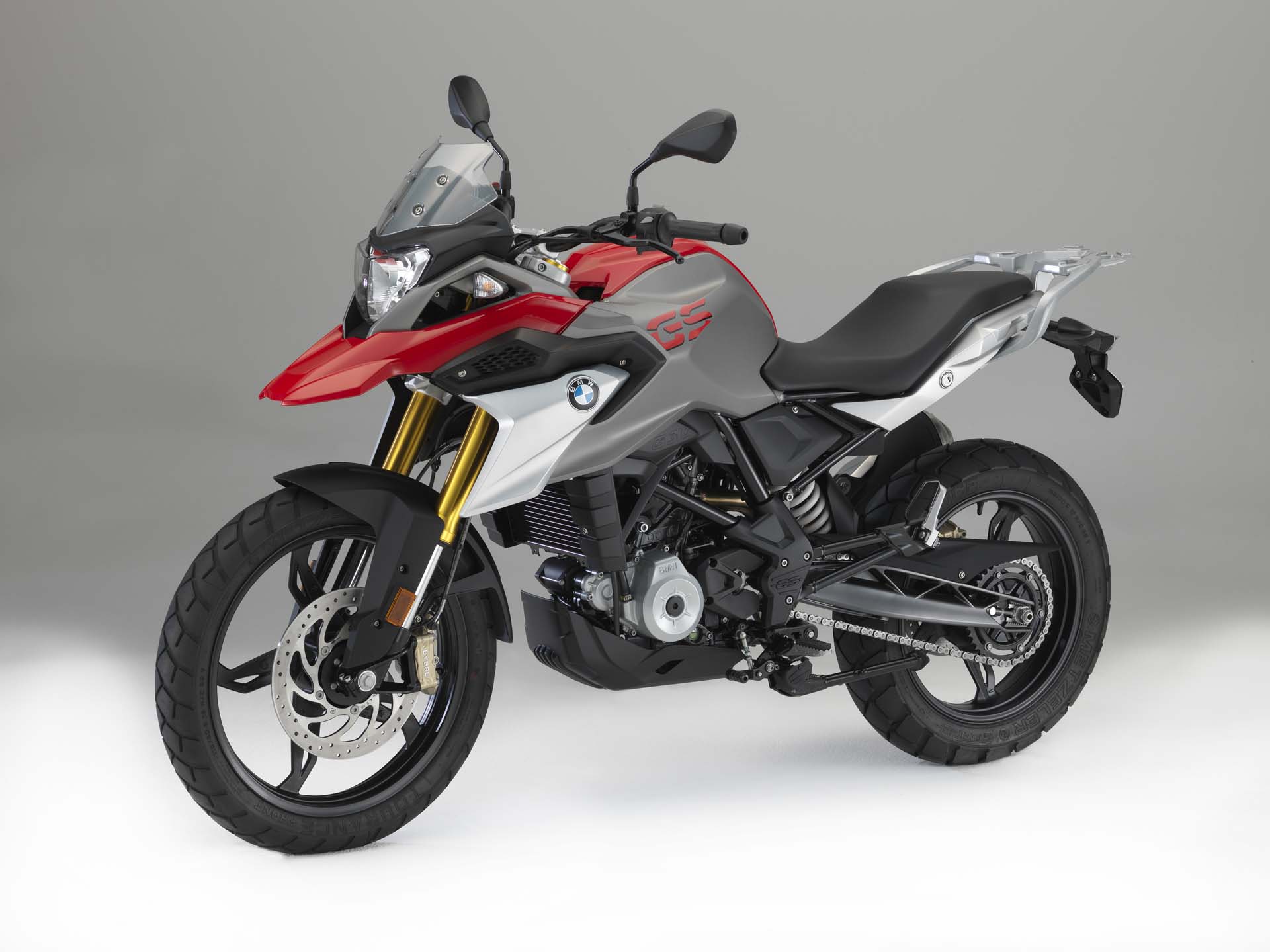 BMW will soon make available the smallest ever GS model, based on the G310 platform introduced earlier this year. The G310GS features a high-tech 313 cc liquid-cooled single with a rearward-leaning cylinder topped by a reverse cylinder-head design, with the inlet port facing forward and the exhaust out the rear. The 34 hp engine is cradled in a tubular steel frame that utilizes long-travel suspension and a 19-inch front wheel to better handle off-road excursions. Built in Bangalor, India in conjunction with India’s TVS Motor Company the G310GS will be the most affordable GS model ever. 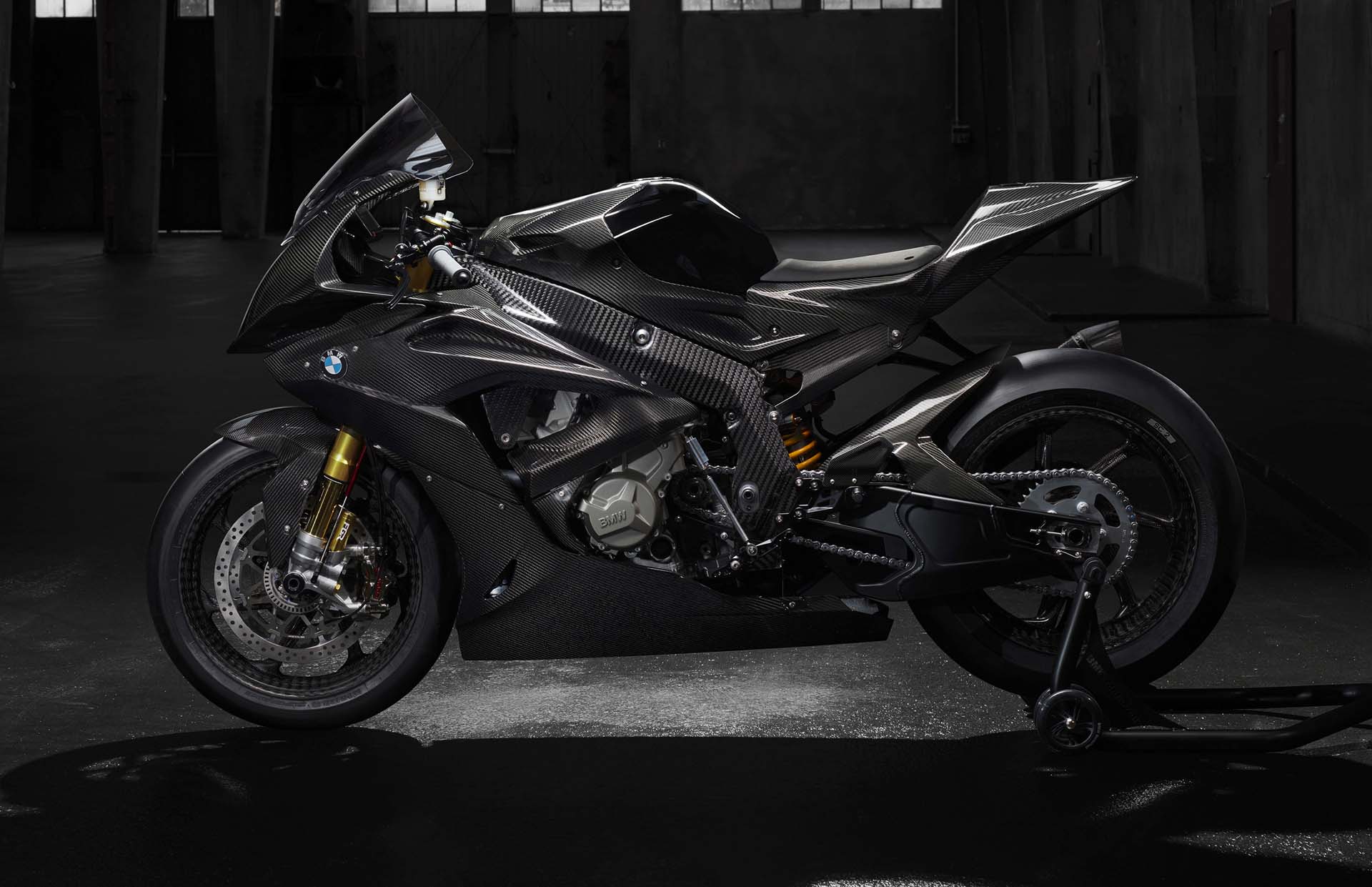 Introduced in 2010 the S1000RR was BMW’s first attempt at a supersport machine, and it impressed with its high performance and advanced electronics package. The company has taken the bike to an entirely new level with the HP4 Race. Not much has been revealed about the new machine yet, only that it will feature the S1000RR powerplant, in a yet undetermined state of tune. The big news is that the frame, wheels and bodywork will be constructed from lightweight carbon fibre. The hand-built supersport will be available in the second half of 2017 in very limited numbers. 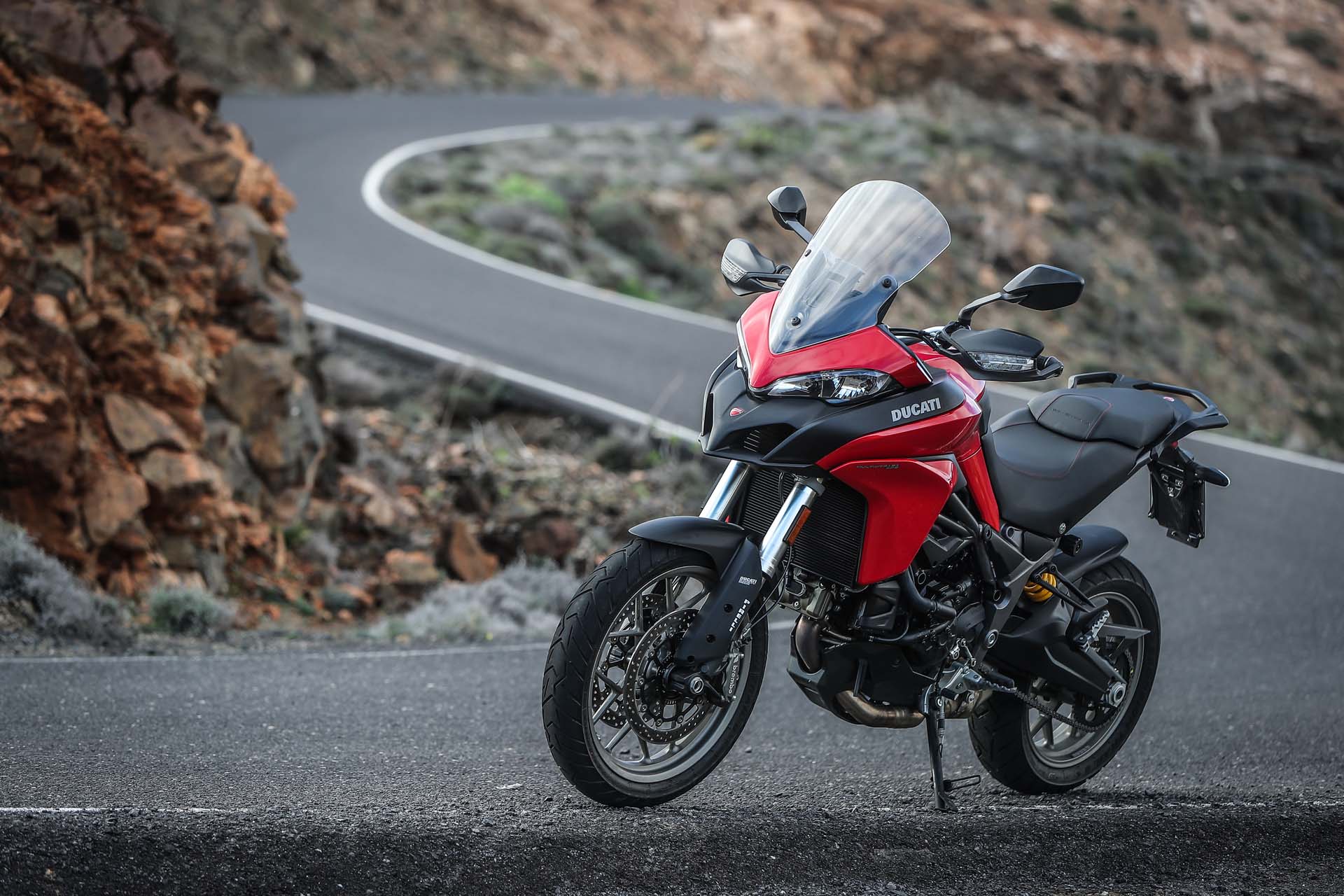 Good things often come in small packages, and the Ducati Multistrada 950 should exemplify this. It features a more manageable 113 hp, 937 cc V-twin than the Multistrada 1200’s 160 hp mill. Ducati hasn’t skimped on features, though, and the 950 has fully adjustable suspension, and comprehensive rider aids that include selectable ride modes, eight-level traction control and three-level ABS. Scheduled maintenance intervals are set at every 15,000 km, and at every 30,000 km for valve adjustments. Starting at $15,295 it’s also more affordable than its larger-displacement brother. 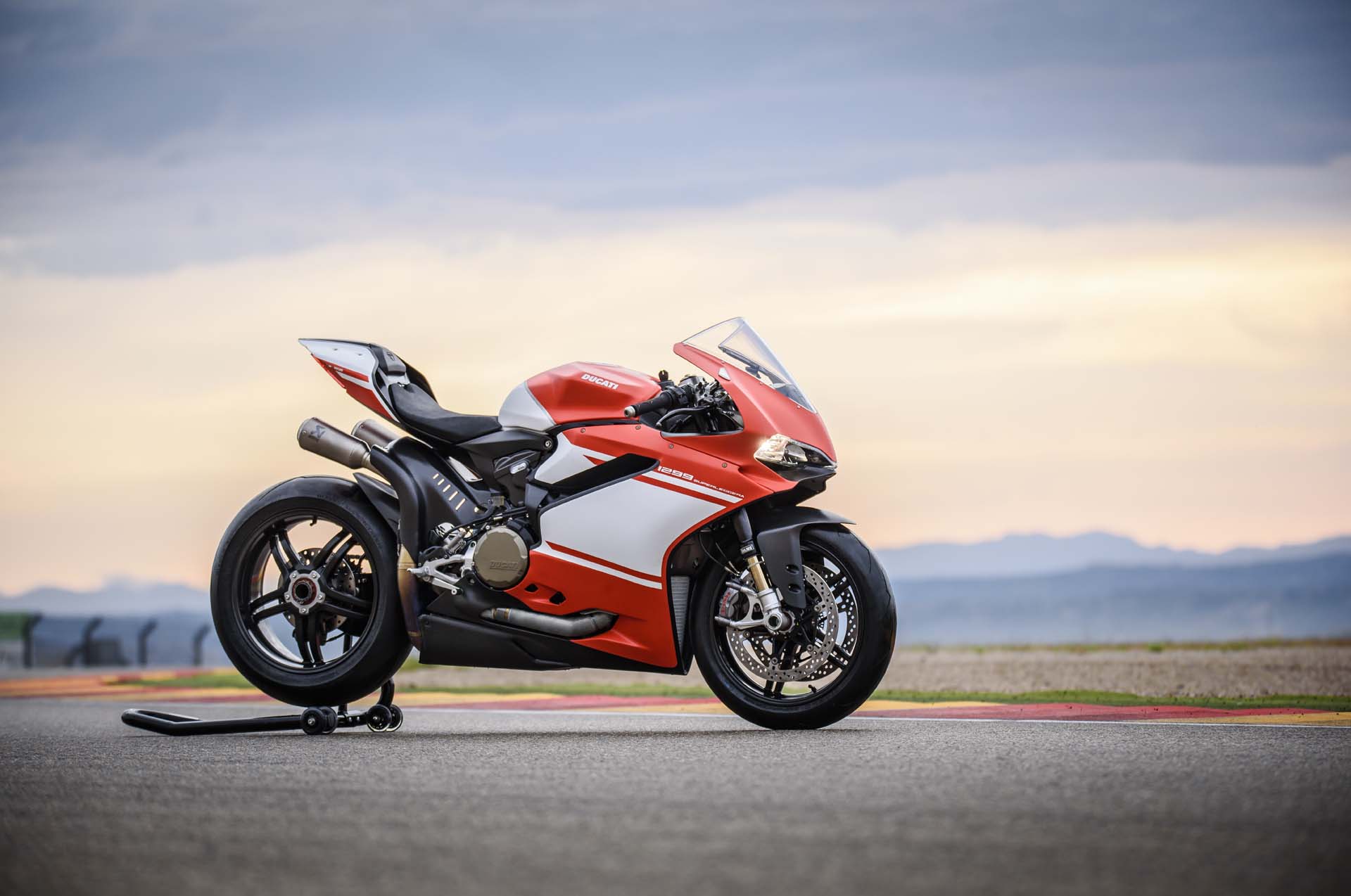 If you’ve ever dreamed of owning a top-level race bike that you can ride on the street, the Ducati 1299 Superleggera is that bike. It features a frame, subframe, swingarm, fairing and wheels made of carbon fibre. These lightweight components drop wet weight to 167 kg, an astounding 24 kg lighter than the 1299 Panigale. Of course, it’s also more powerful; its 1,285 cc V-twin produces 10 horsepower more than the standard engine, at 215. If you don’t think that’s light enough or powerful enough, it comes with a track kit that adds five horsepower and drops four kilograms. Pricing is in the six digits, though. And the 500 that will be built are already spoken for. Sorry. 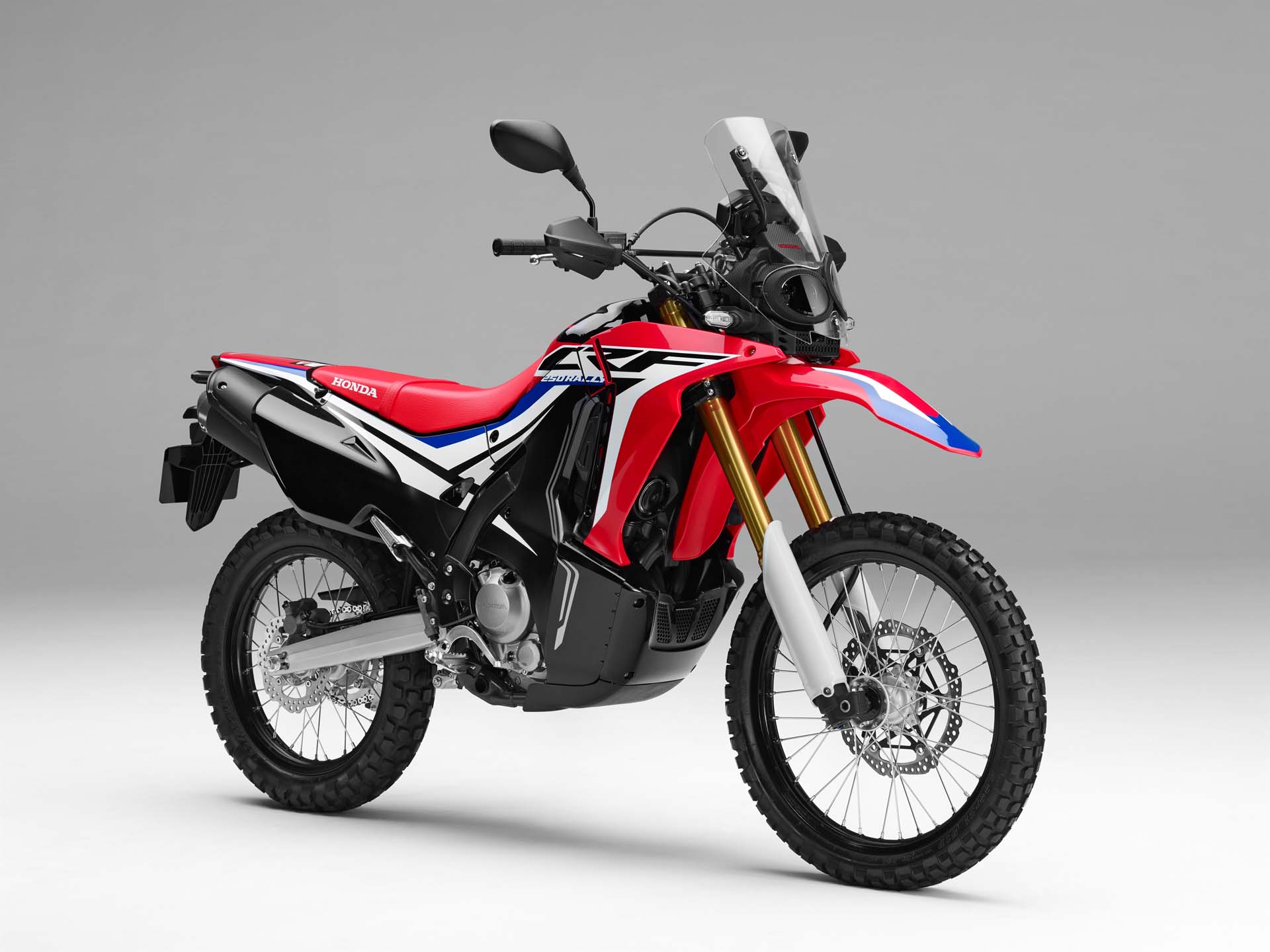 Honda has upgraded the CRF250L with new bodywork and a bit more power for 2017, which should make the popular dual-sport even more appealing. But the real attention grabber is the new CRF250 Rally. It borrows styling cues from Honda’s Dakar race bike, the CRF450 Rally, with a frame-mounted fairing, dual headlamps, more elaborate instrumentation, wind-cutting bodywork, and a larger 10.1-litre fuel tank, up 2.4 litres. It also has an improved front brake and taller suspension that increases ground clearance by 15 mm and seat height by 20 mm. 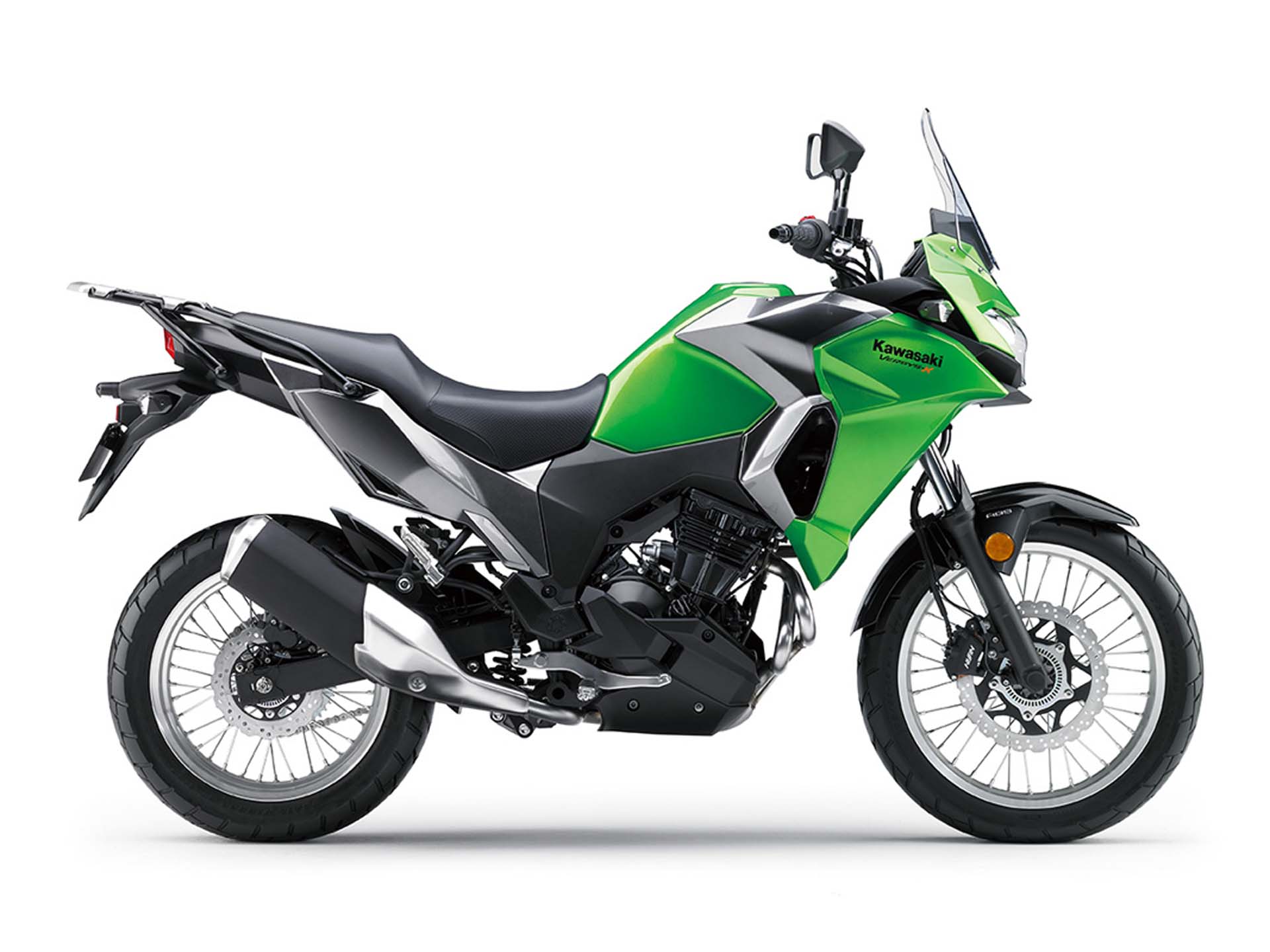 Kawasaki has introduced a small-scale Versys, called the Versys-X 300. It combines the familiar 34 hp, 296 cc liquid-cooled parallel twin from the Ninja 300 sport bike, with a Versys 650-like chassis that has an upright riding position, a frame-mounted fairing, and long-travel suspension. Spoke wheels are adventure-bike typical 19-inch front and 17-inch rear, and several touring accessories will be available, including hard panniers, LED fog lights, power outlets and a centre stand. It will be available in green or grey and black, and ABS will be standard. 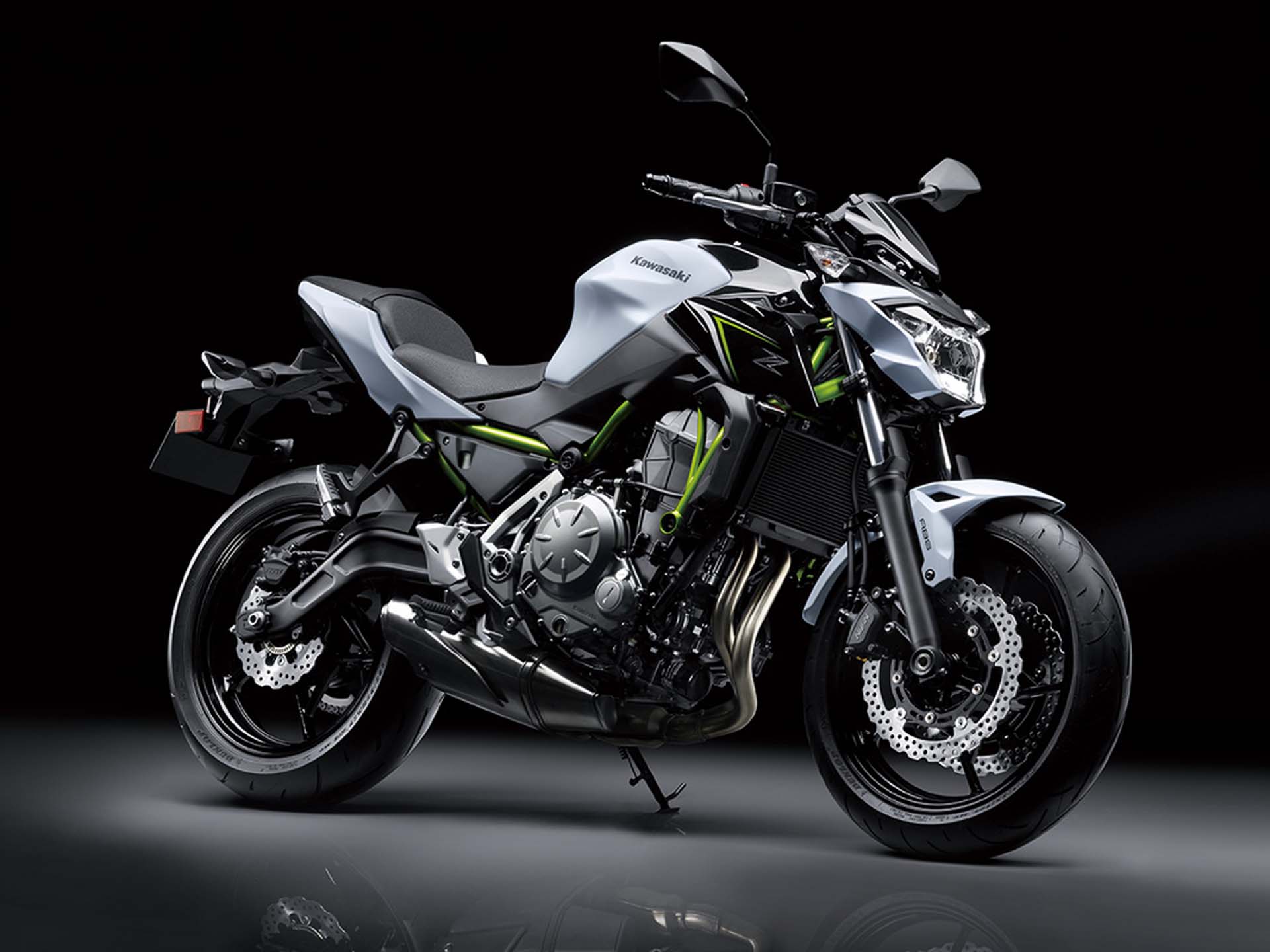 Also new from Kawasaki is the Z650. Utilizing the Ninja 650R’s 649 cc parallel twin, the Z650 is not an ER-6n with new styling, but rather an entirely new motorcycle. A new steel trellis frame replaces the former perimeter frame, and it has a linkage type rear suspension instead of the ER-6n’s straight-rate offset shock. Specs reveal that the engine produces a tad less power than before, down to 67 hp from 71, but the revised engine tuning is designed to increase low to midrange torque. Aggressive styling ties this little Z bike to its larger Z800 and Z900 stable mates. It will be available with or without ABS, with prices starting at $7,499. 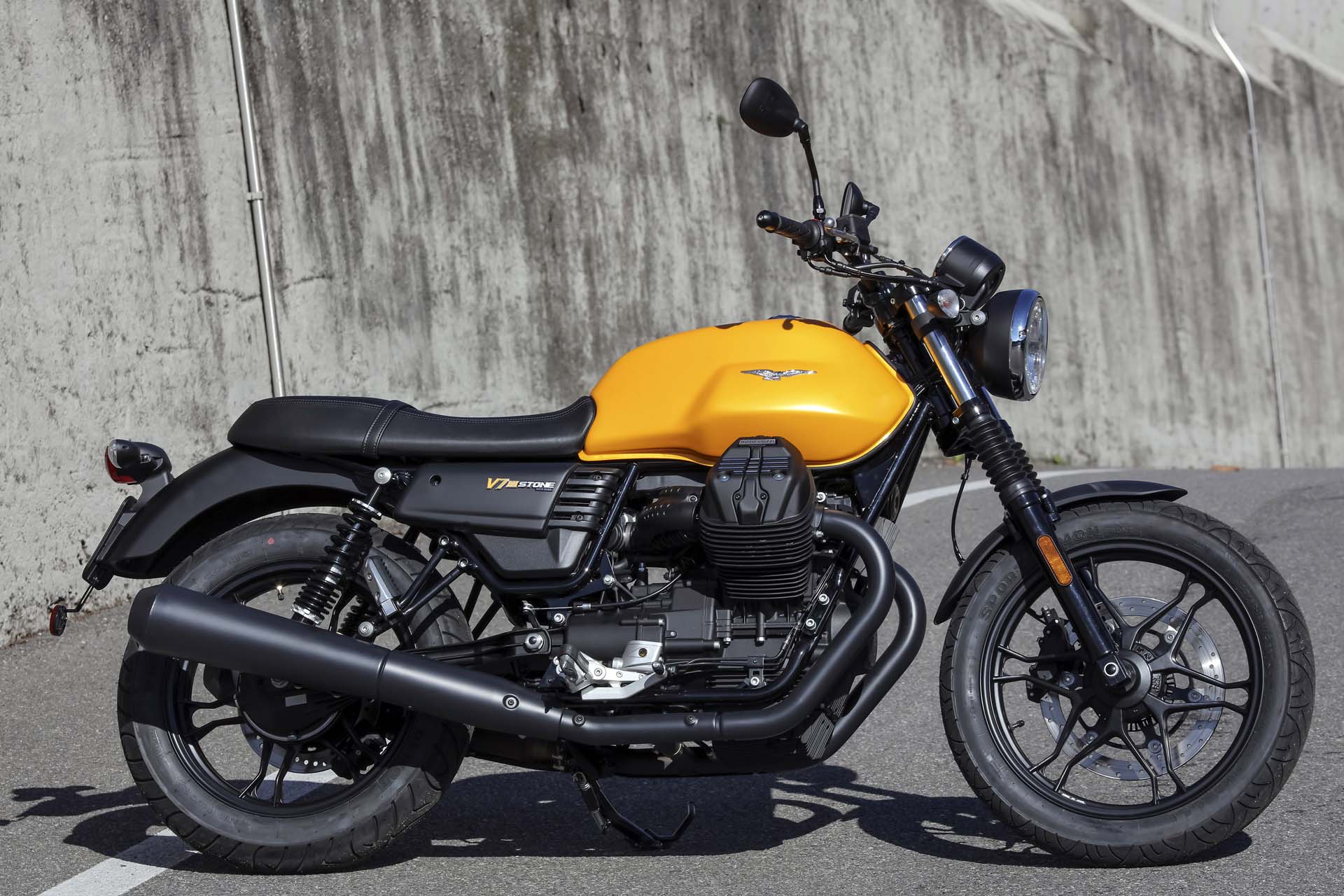 The Moto Guzzi V7 is a classically styled retro bike with a distinct Italian flair. Its characteristic, transversely mounted 744 cc V-twin has been revamped with many new parts, including pistons, cylinders and heads, which boost power by 10 percent, now at 52 hp. The frame has been reinforced, and steering geometry has been altered to enhance stability and sharpen handling. Seat height has been dropped by 20 mm to 770 mm, thus broadening the bike’s appeal for shorter riders. Four variations will be available: the base Stone with blackout trim and cast wheels, the Special with some chrome highlights and spoke wheels, the Racer with contrasting frame paint, low handlebars, a flyscreen and Ohlins shocks, and the Anniversario, with chrome fenders and fuel tank, and a tan seat. 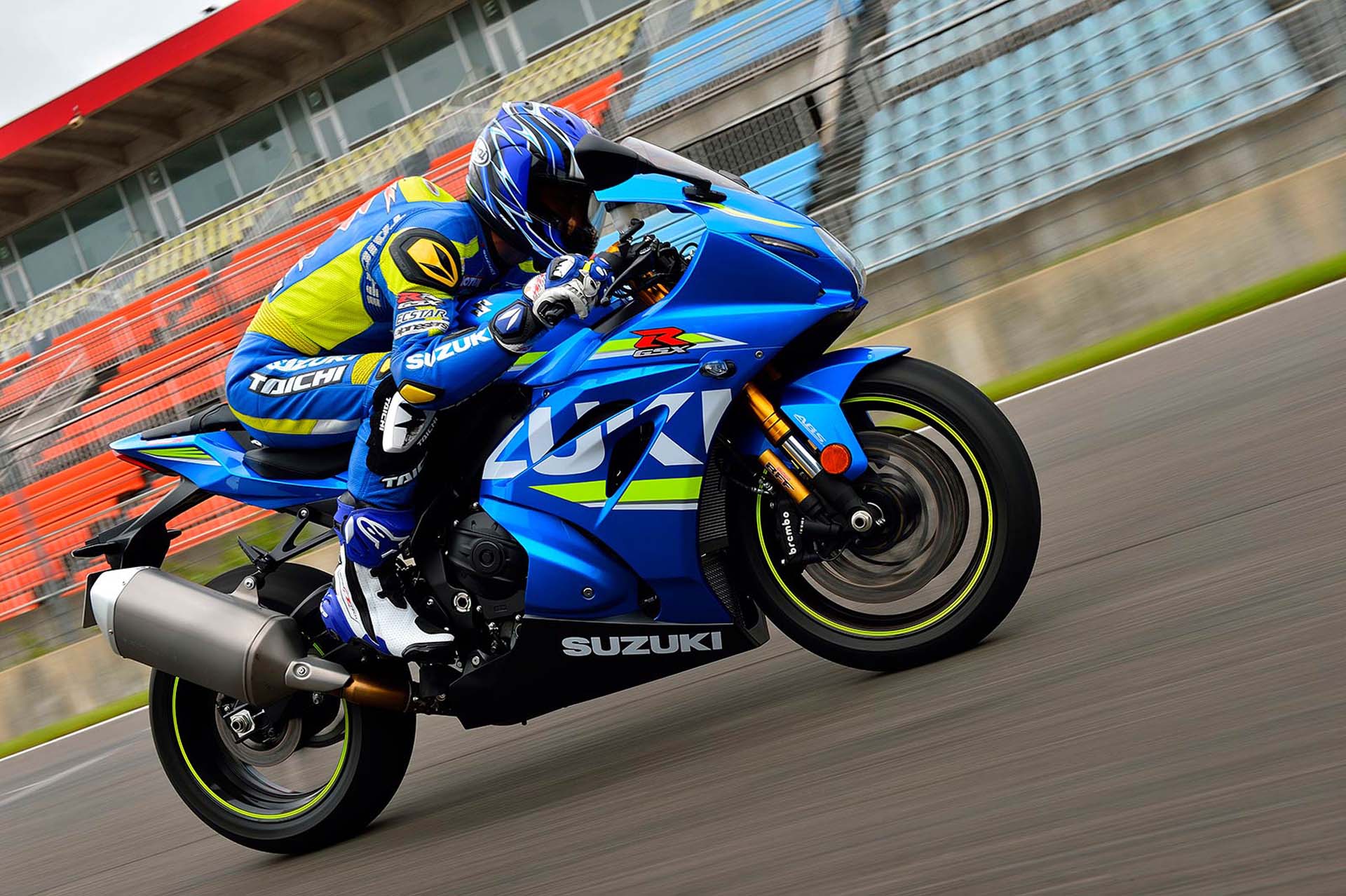 It has been a long, long time since Suzuki performed a major update on the GSX-R1000, but it finally gets its due makeover for 2017. The sixth-generation open-class Gixxer gets a larger bore and shorter stroke 999 cc inline four with variable valve timing. The new engine gets a 15 hp boost in power to 200 hp. The GSX-R1000 finally gets lean-sensing traction control with 10 levels of intervention, as well as lean-sensing ABS. A new frame is 20 mm narrower and 10 percent lighter than before. For the first time since the big-bore GSX-R has been available there will be two models to choose from: a standard one, and a higher-spec GSX-R1000R that features a quick shifter, launch control, ungraded Showa suspension, and a lightweight battery among a couple of other unique items. 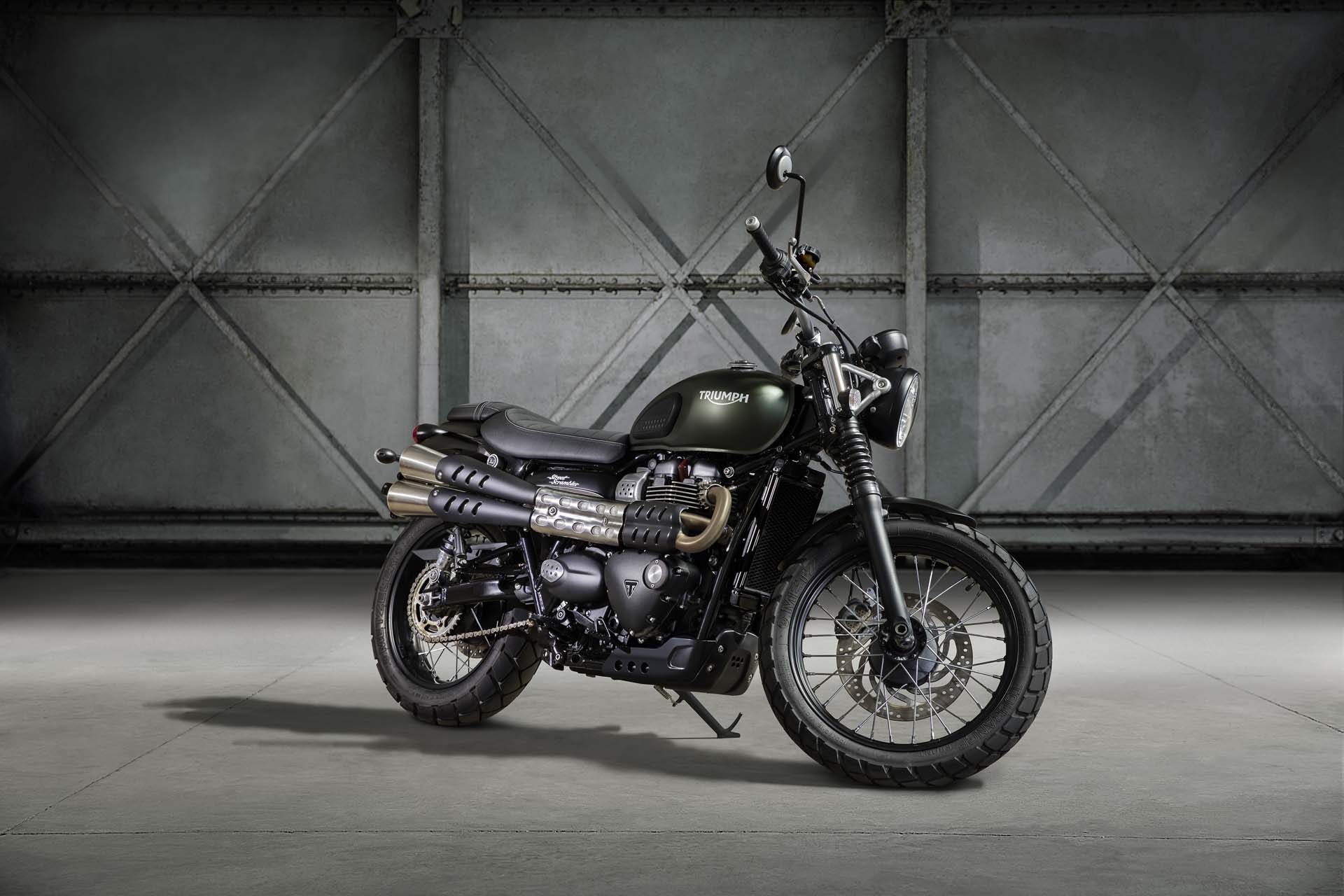 Triumph redesigned the Bonneville line up in 2016, introducing new liquid-cooled 1,200 cc twins with six speeds in the classically styled Bonneville and the sporty Thruxton, and a new 900 cc liquid-cooled twin with five speeds in the Street Twin. The only Bonnie left that used the previous-generation air-cooled twin was the Scrambler. It’s gone now, replaced by the new Street Scrambler, built around the 900 cc engine from the Street Twin. Aside from the mandatory wide handlebar, taller suspension, high mufflers, 19-inch front wheel, and knobby tires, this scrambler has switchable ABS, and removable passenger pegs and pillion seat, the latter replaceable by a luggage rack. 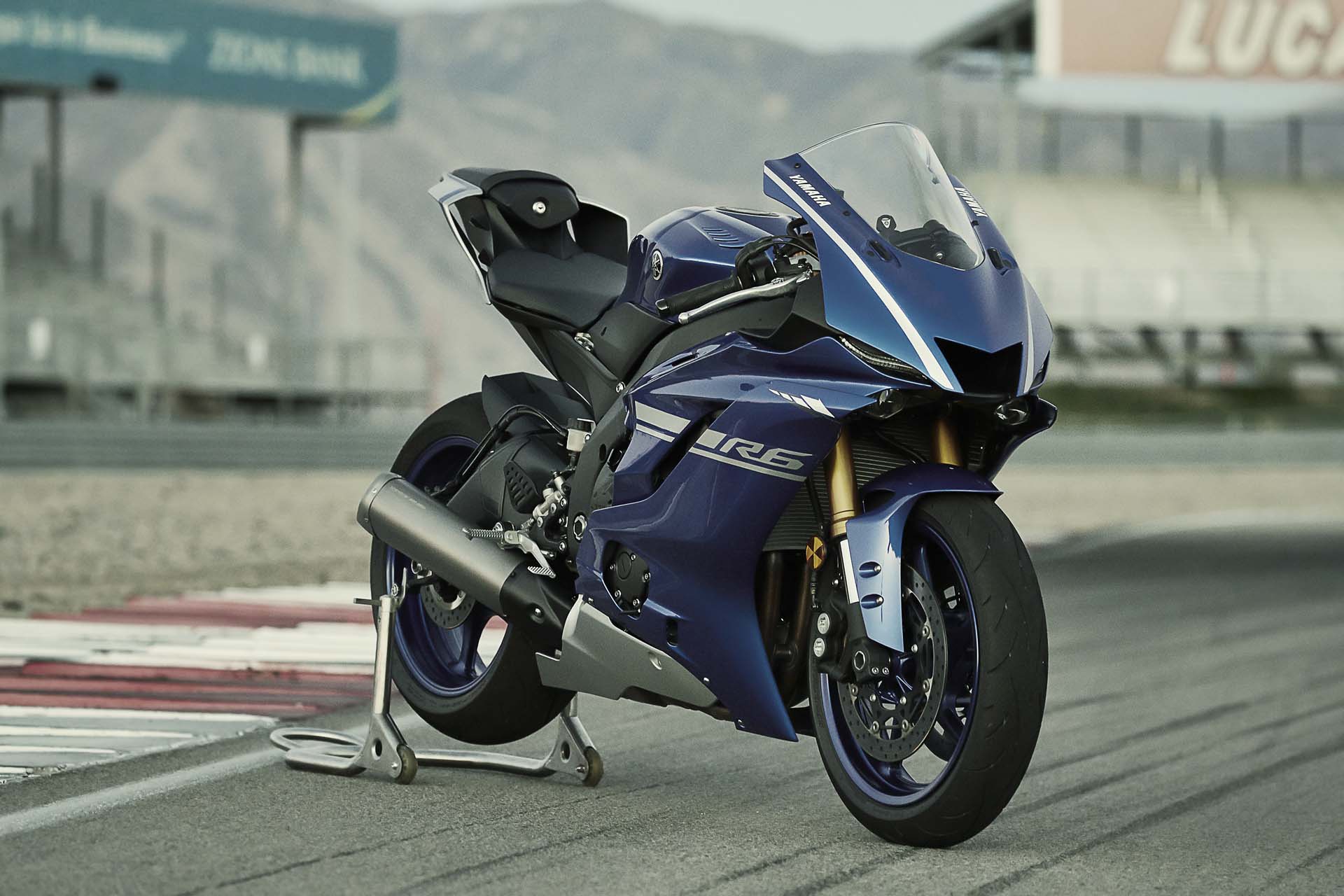 The 600 cc supersport class might not be as popular it once was, but that hasn’t stopped Yamaha from redesigning the R6. Bold new styling borrows heavily from the R1, and aside from the new plastic you’ll find a new fork and shock, new cast wheels, and like the R1, the R6 now has an aluminum fuel tank. New electronics include three ride modes, five-way adjustable traction control, and of course there’s ABS. Front discs are 10 mm larger at 320 mm, LED headlights replace the previous model’s halogen bulbs, and there’s a new LCD instrument panel. Despite some lighter components, the R6 has gained a kilo, at 190 kg. It has also gained $2,000, now at $13,999. 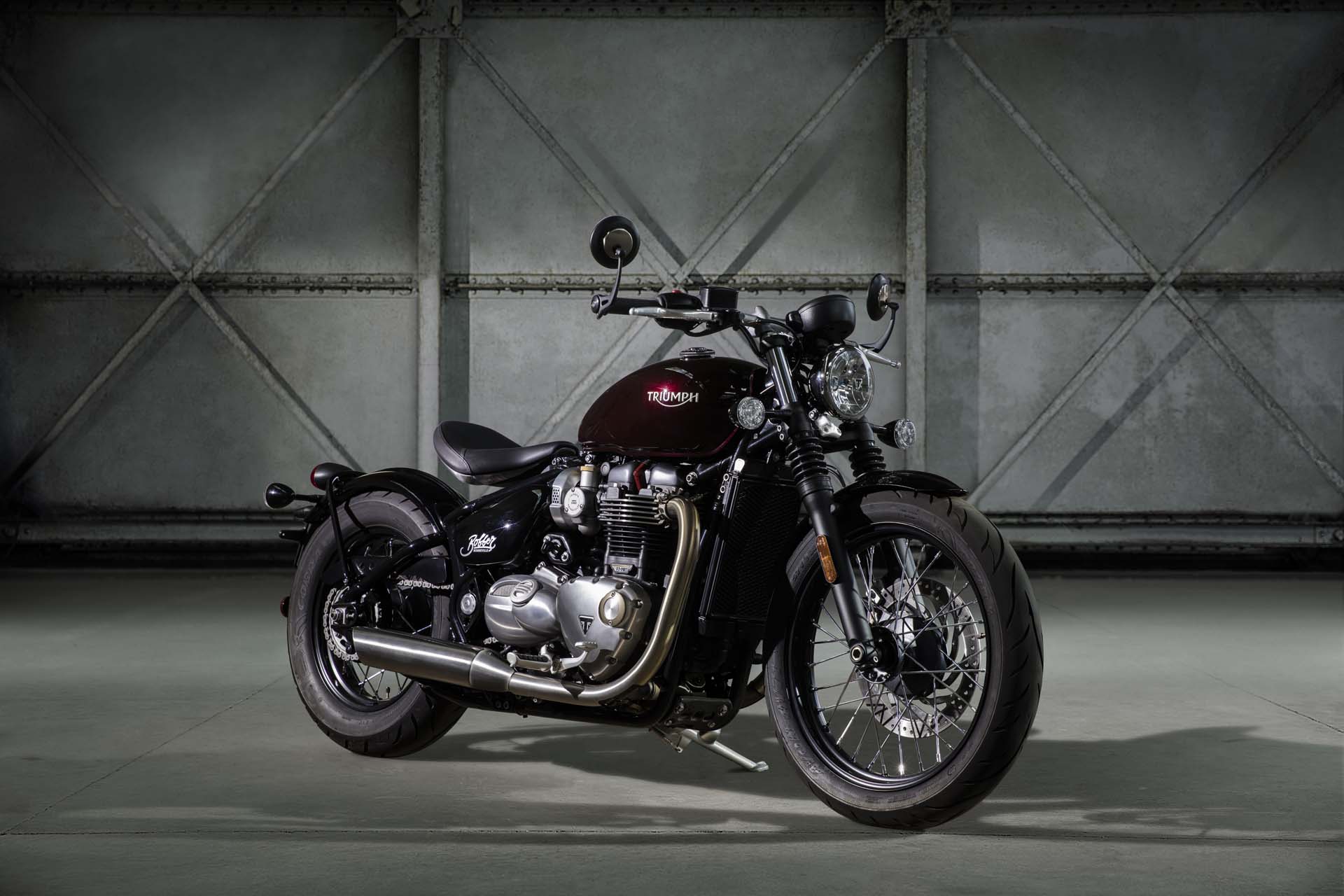 When Triumph introduced the completely redesigned Bonneville line earlier this year, the company was certain to follow up with more models than the T-120 and Thruxton. The folks from Hinckley did just that, introducing the Bonneville Bobber, which is a custom bike unlike any other recent Triumph. It features minimalist styling, and a chassis that utilises a single-shock rear suspension, a tire-hugging rear fender and a solo saddle designed to mimic the rigid-tail bobbers of yesteryear. The seat is adjustable for riders of different heights, as is the angle of single, round gauge nestled between the handlebar. It’s powered by the same six-speed 1200 High Torque twin as the T120, and there’s no doubt that this bike oozes cool.

See more
Costa Mouzouris is a former motorcycle mechanic and racer who traded tools and overalls for a laptop and a suitcase about 15 years ago, when he began writing about the two-wheelers he still obsesses about.
Advertisement