Santa’s Secret Workshop is just as magical inside as you would imagine.

And he’s done a very good job of keeping it a secret: it’s well tucked away at the back of an industrial complex in the north end of Toronto.

But hidden inside, between the four plain warehouse walls and the concrete floors caked in decades’ worth of glue and glitter, lie the mementos of well over a century’s worth of delivering holiday cheer.

The Toronto Santa Claus Parade is about to celebrate its 112th year, making it not only the longest-running children’s parade in North America but the second-oldest overall – only the Rose Parade, first held in 1890, has been going on for longer.

For 90 percent of Ontarians – and indeed many Canadians across the country, who follow along each year on CTV’s broadcast from coast to coast – the Parade heralds the official start of the holiday season.

Originally conceived in 1905 by Eaton’s department store – back then it was only Santa rolling down Yonge Street on his own – the Parade has since been taken over by a non-profit organization and has grown to include 25 floats, 21 marching bands, and roughly 3,000 volunteers every year. They pass by over a million people who line up several layers deep along both sides of the 6.5 kilometre parade route that winds through downtown Toronto.

For Santa and his team of elves, a celebration of the season of such a monumental scale presents some serious challenges. After all, there’s enough going on at the North Pole at this time of year – letters are arriving from children all over the world, toys are being made at a frantic rate, and programming that GPS for the sleigh every year must go on for weeks on end. 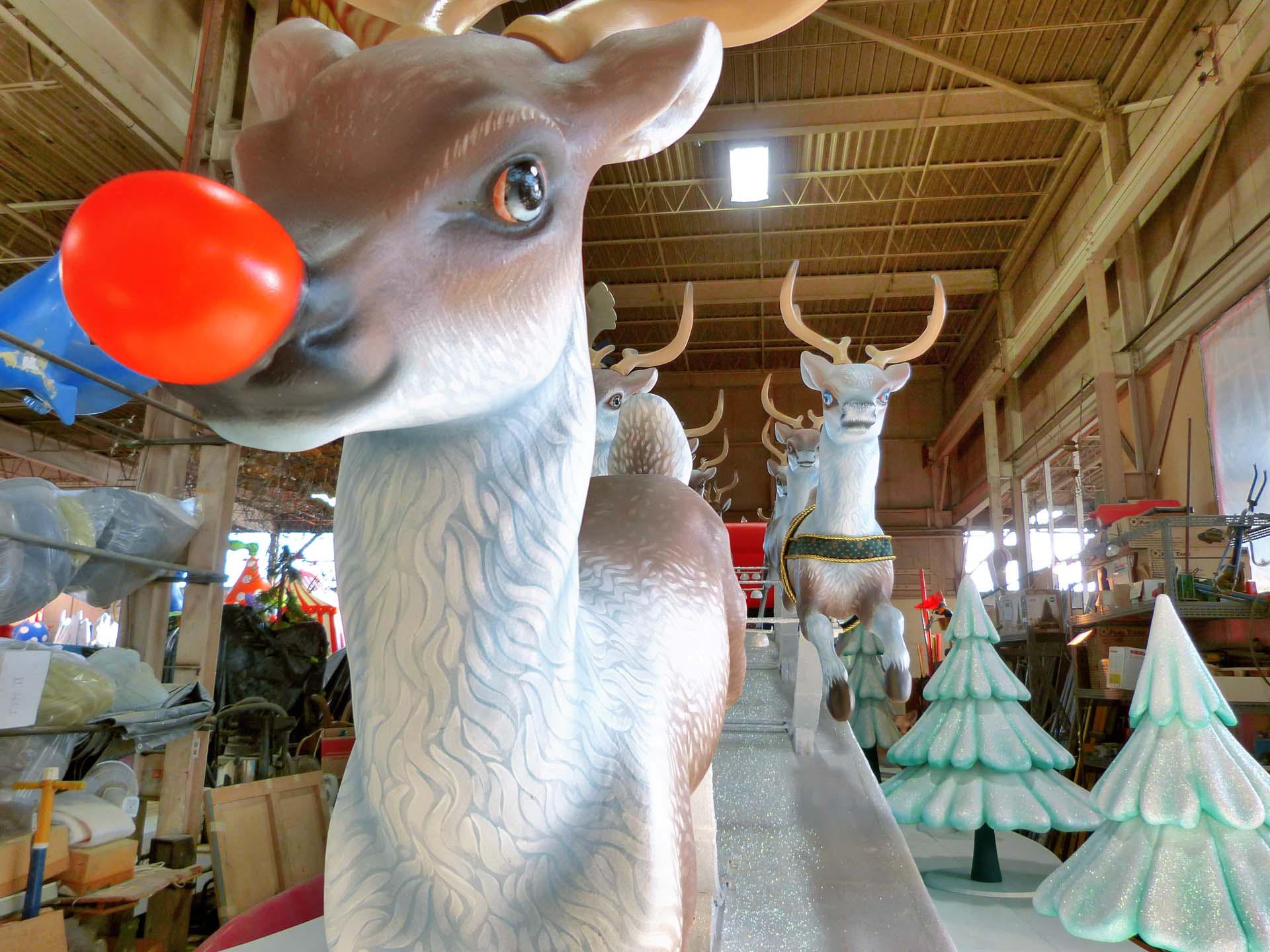 Meanwhile, Canadian children can’t be forgotten: there are floats to prepare and families to delight. You can’t blame Santa for calling in a little bit of help.

This is Kia’s third year of providing support to the Toronto Santa Claus Parade, and it’s a partnership the automaker has quickly come to treasure.

“We are the official vehicle of the Parade,” explains Steve Carter, Kia Canada’s Director of Marketing. “It’s a feel-good way of connecting with consumers and spreading some holiday cheer in the local community.”

Kia will supply 26 Sorento SUVs to the Parade this year, the majority of which will be used to pull floats through the streets of downtown Toronto. Though the feat looks quite impressive with floats averaging just under 10 metres in length and featuring highly elaborate designs, lightweight build materials such as wood, styrofoam, and papier maché combine to bring most floats in at a weight of roughly 1,500 kg, which is well under the Sorento’s 2,267 kg maximum tow rating.

But the Parade means more to Kia than showing off the Sorento’s capabilities. It also creates an opportunity to put its vehicles in front of consumers who might have an outdated image of the brand. 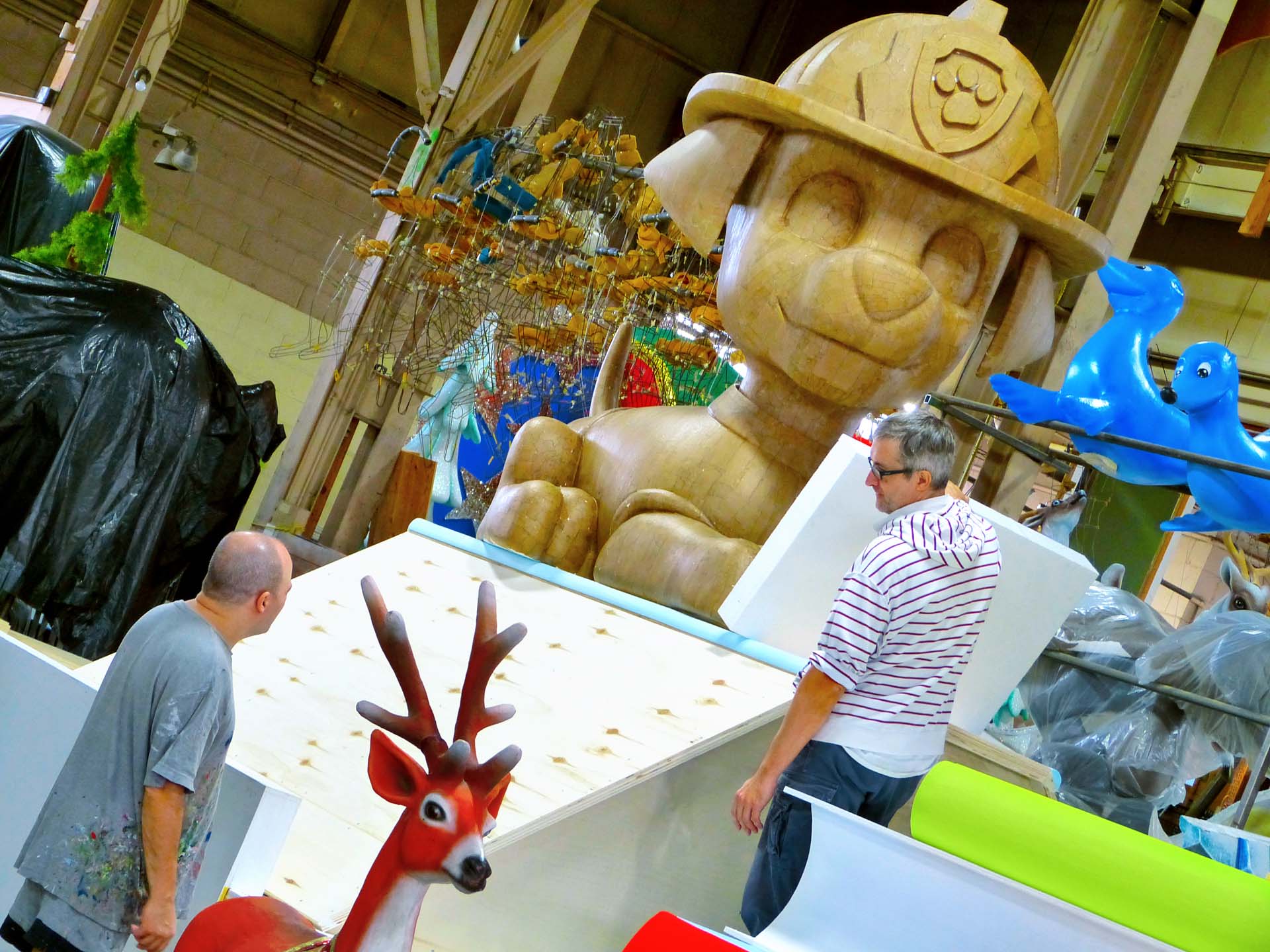 “We’ve been in Canada for 17 years,” Carter explains. “Coming into the industry [then], I will say that the product was not as attractive as it is today.

“With (Kia’s Chief Design Officer) Peter Schreyer joining the organization roughly nine or ten years ago, that’s when the product renaissance really began. In the past five or six years you’ve seen the product evolve from something that was known as being affordable but bland in design and of low quality [to] continually winning design and quality awards for the look and feel of the vehicle.

“It’s a matter of finding a medium in which to communicate that to consumers. Having Canadians see the vehicle through the parade is an A1 opportunity for us to demonstrate how great-looking our product is.”

The vehicles, as with everything else in the Parade, have a very long day coming up this Sunday, November 20.

After being dropped off at the Secret Workshop on Friday, the Sorentos will be hooked up to the floats by volunteers on Saturday and moved onto the street to be staged.

Bright and early on Sunday, the crew of 30 Toronto Emergency Medical Services volunteers driving the Sorentos throughout the day will arrive at the Workshop to begin the 5:00 AM, 45-minute caravan through city streets and down to Christie Pits where final preparations get under way.

The start of the Parade then departs eastward along Bloor Street beginning at 12:30 PM. For the lucky children sitting along the parade route – which runs south on Avenue Road, past Queen’s Park and the Ontario legislature, continues down University Avenue, and turns east on Wellington Street to end at the historic St. Lawrence Market – it will take 100 minutes for the entire parade to pass by. But for the thousands of volunteers and the big man himself, it takes twice that amount of time to complete the route from start to finish. 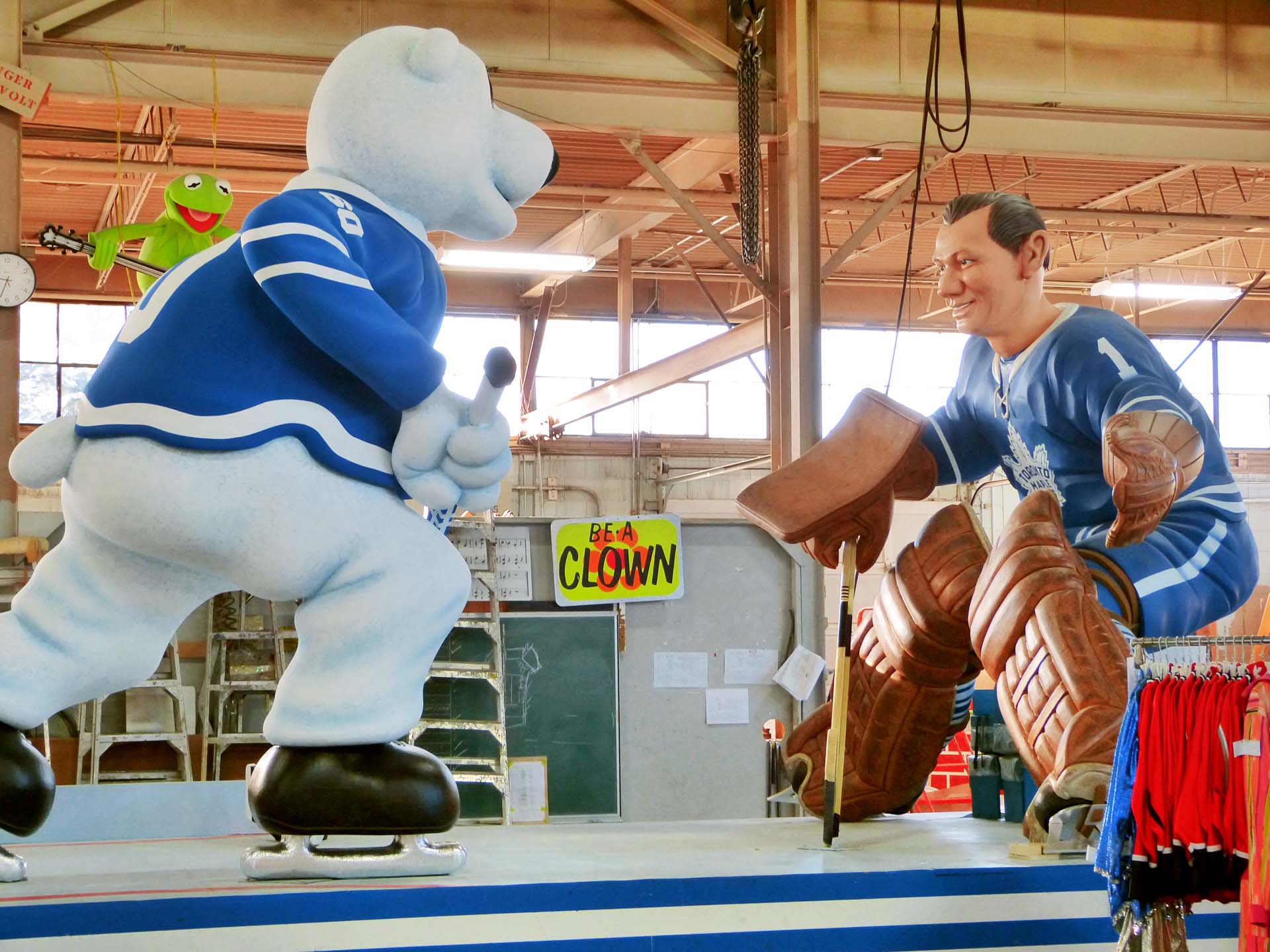 Speaking of the big man, he’s got a special surprise in store for Canadian children this year. On top of appearances by PAW Patrol stars Chase, Marshall, Rubble and Everest; a float commemorating the 100th anniversary of the Toronto Maple Leafs with mascot Carlton taking a slapshot on legendary goalie Johnny Bower; as well as showings by Peppa Pig and her family and other well-loved characters; there’s also a brand-new float in the 2016 parade for Santa Claus himself.

Measuring in at just under 14 metres in length, making it the longest float the parade has ever built, Santa’s new design features a hill-like slope that highlights the man with the red suit as the true star of the show. Also, keep an eye out for the finer details: the designers have integrated elements into the float’s landscape that represent every climate zone to be found across this vast country of ours.

Alfred Iannarelli, General Manager of the Toronto Santa Claus Parade, has been part of the organization for more than 45 years. He understands better than anyone how much effort and coordination goes into delighting Canada’s children every year, and he won’t be caught understating Kia’s role.

“Without Kia, there is no parade,” Iannarelli says. “They stepped up with their Sorentos, and they’re fabulous. They look good, and they’re all very capable of pulling all these massive floats.”

Carter adds that beyond the opportunity to showcase Kia’s products, the chance to build a sense of pride within the company is uniquely special.

“What I remember growing up as a kid, and now at my age with young kids, if we’re not in downtown Toronto we still watch the parade on TV,” he says. “Within our own four walls here, it also spreads that holiday cheer and love to spend time with your family and go down and engage with the parade.

“When you’re there with your son and your daughter, being able to say, ‘See the car that’s pulling the float? Mommy or Daddy works for that company,’ that’s a sense of pride that each of our employees can get. 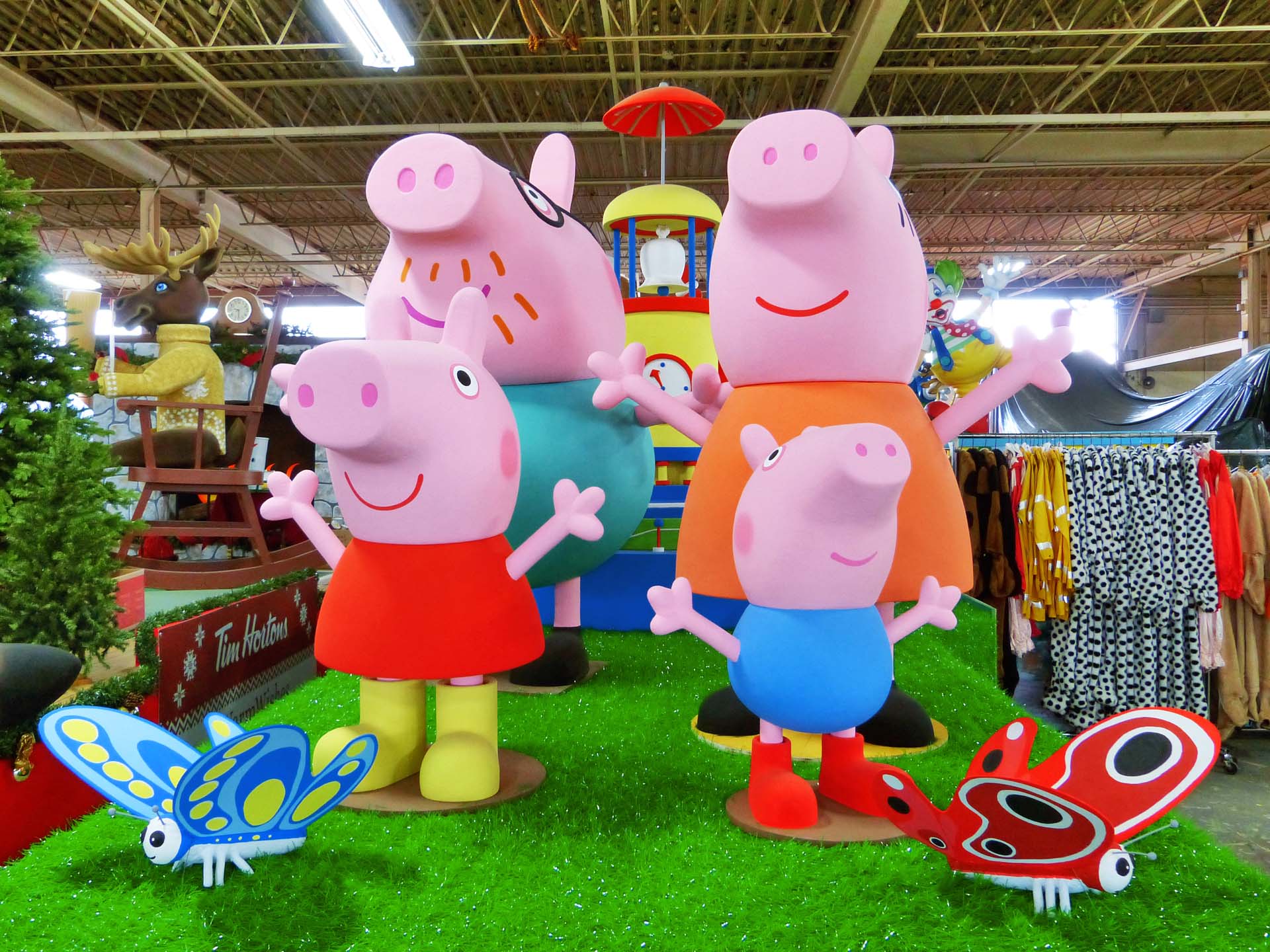 “Whether you are there at the parade in Toronto or at home watching it across the country, we’re hoping there’s some opportunity to see the Kia product as they’re watching.

“And I’m hoping the elves have my presents set aside,” he adds with a laugh.

For those in the Greater Toronto Area, the Santa Claus Parade leaves Christie Pits at 12:30 PM on Sunday, November 20th and winds its way through a downtown route that ends at St. Lawrence Market. The Parade will then be shown tape-delayed on CTV affiliates across Canada at 4:30pm ET/PT (5:30pm AT on CTV Atlantic, and on CTV GO). Route details, transit information, planning tips and more can be found on the Parade’s official website, thesantaclausparade.com.

Here at autoTRADER.ca, our holiday cheer is just ramping up. In a couple of weeks, we’ll be taking a test drive in one of the very same Kia Sorentos that is being used to pull a float in this year’s Toronto Santa Claus Parade. Stay tuned!