A look at the history, evolution, and inner workings of the seatbelt system.
Advertisement

A look at the history, evolution, and inner workings of the seatbelt system.

They require virtually no maintenance, little if any attention and while in use are nearly invisible to the majority of drivers. Indeed, seatbelts are one of many vehicle systems that most drivers take for granted, using frequently, regularly, and with little second thought. A fabric strap feeds out from beside you, you click a thing into a thing, and then you focus on your drive.

From humble beginnings, the seatbelt got its start in non-automotive applications, expanded to include numerous advanced functionalities, and today, works with more intelligence and effectiveness than ever, thanks to modern technology.

Here’s a closer look at the automotive seatbelt: where it started, where it is, and how it works.

Seatbelt History and Tech Over the Years 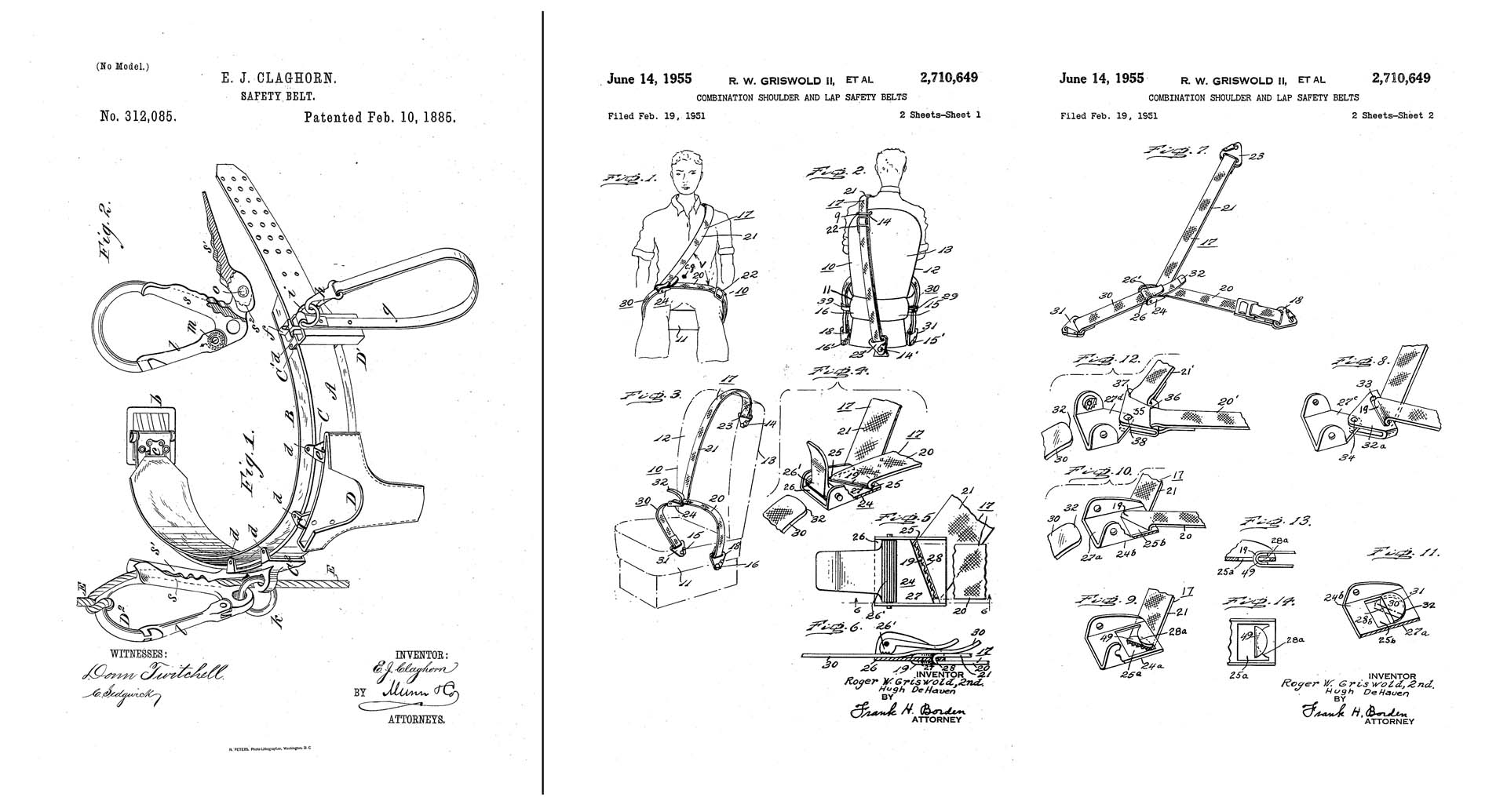 Seatbelt origins are a little cloudy, said to have been invented well over a century ago, and intended originally as a safety device to secure a person to a fixed object, but not necessarily a car seat. Initially, common seatbelt users included airplane pilots, window-washers and drivers of military equipment. Not long after, the benefits of a belt-based restraint were recognized, and applied to automotive use, alongside other safety technologies of the day.

A period of research and legislation led to seatbelts being offered optionally in some American cars in the late forties and early fifties, and in the late fifties, Saab made them standard kit. 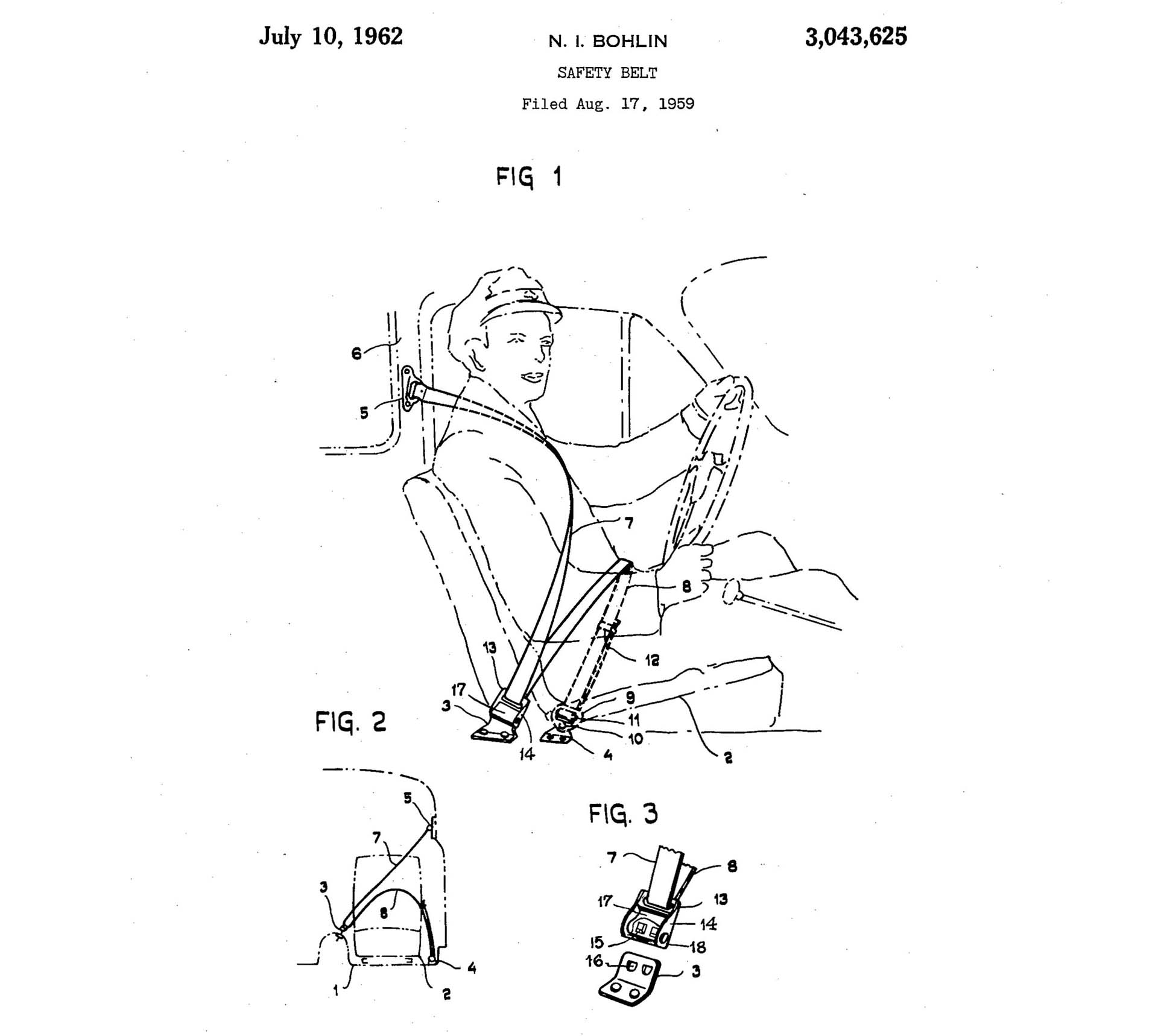 According to Volvo, engineer Nils Bohlin introduced the advanced three-point seatbelt into the production PV544 model back in 1959. This saved many lives – well over a million, by some estimates. Interestingly, Volvo is storied to have waived patent rights to the three-point seatbelt back then, so everybody could benefit. 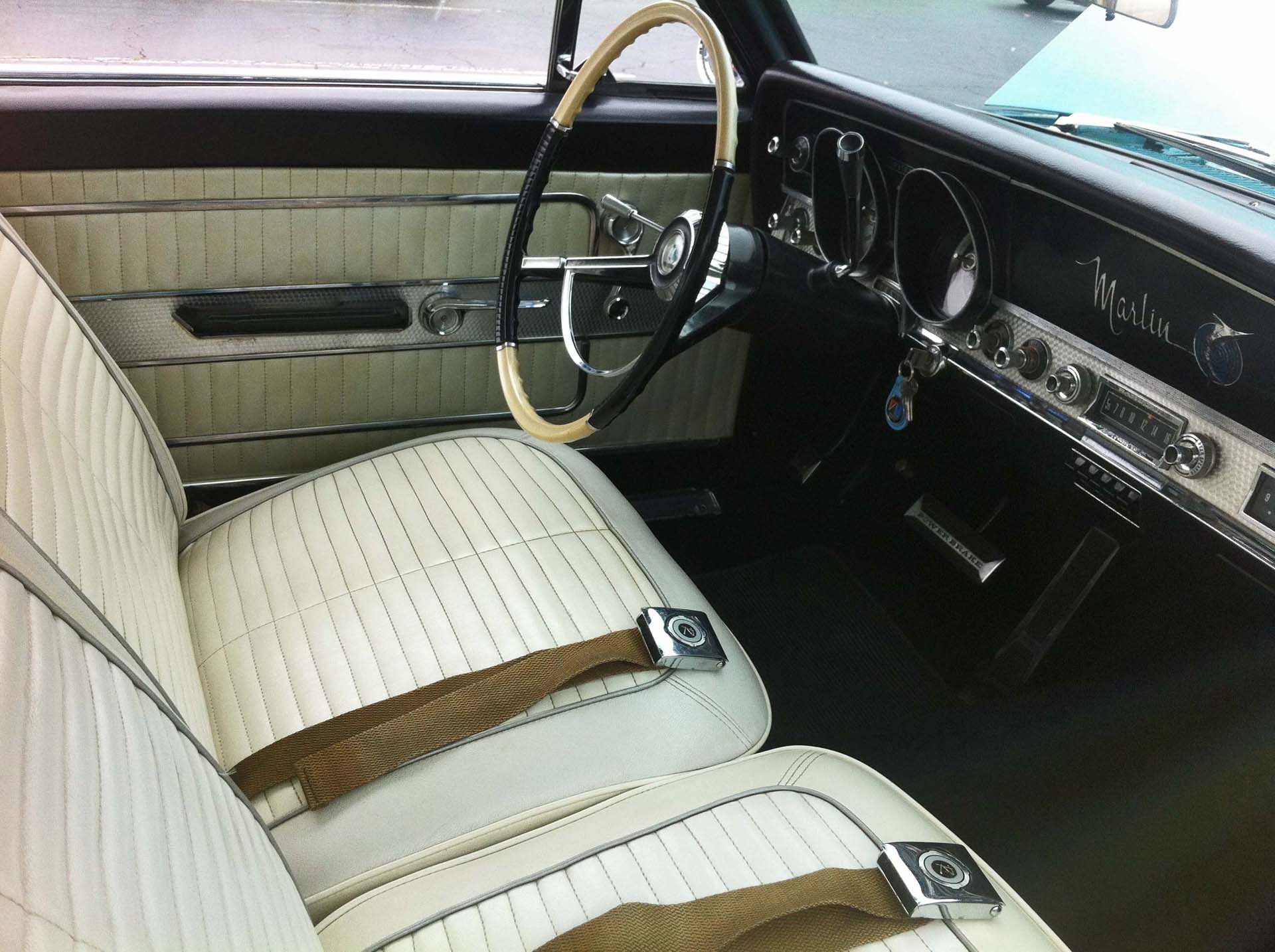 Early on, two-point lap-belts were the standard, and seatbelt evolution saw the invention of the three-point belts that Volvo initially brought to market, as well as a belt-in-seat design which kicked into play, years later. This design saw the belt entirely attached to the seat, not the vehicle body, and it was popular in certain applications, for a time. Eventually, motorsports applications grew to include multi-point seat harnesses, too.

Early seatbelt systems featured a locking retractor system, which used a spool-mounted mechanism to allow the seatbelts to unspool at a low speed, but not quickly. 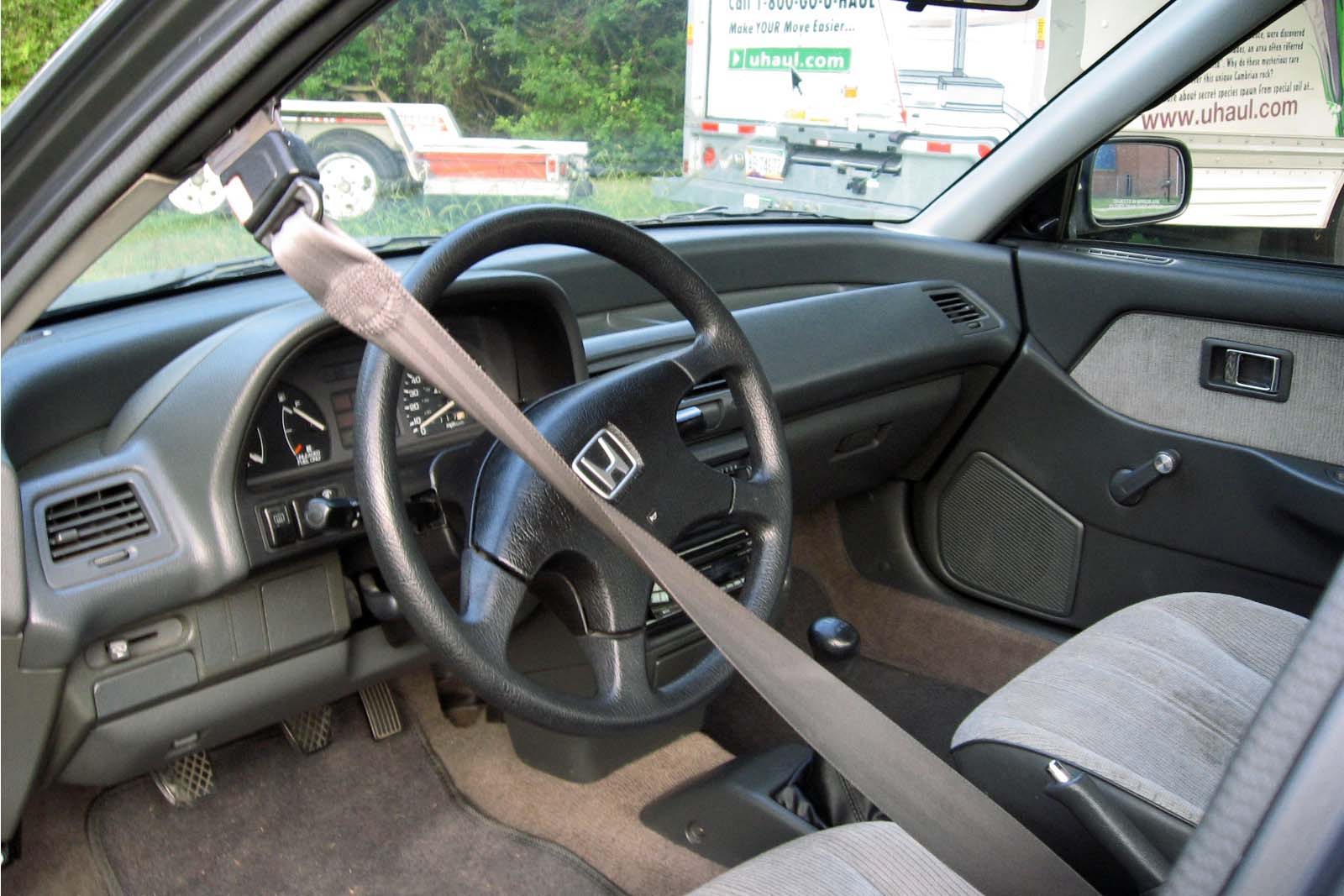 For a time, some vehicles featured automatic seatbelts, which mounted one part of the seatbelt system onto a concealed, motorized rail system. Once the driver was seated and their door was closed, this rail-mounted system would move the upper seatbelt attachment point backwards, effectively buckling the driver in automatically. It was never a particularly popular system. In the more recent past, road-going vehicles have included innovative seatbelt provisions which make it easier to properly attach a child seat, as with the LATCH system, and a variety of warning systems if an un-buckled occupant is detected on board. 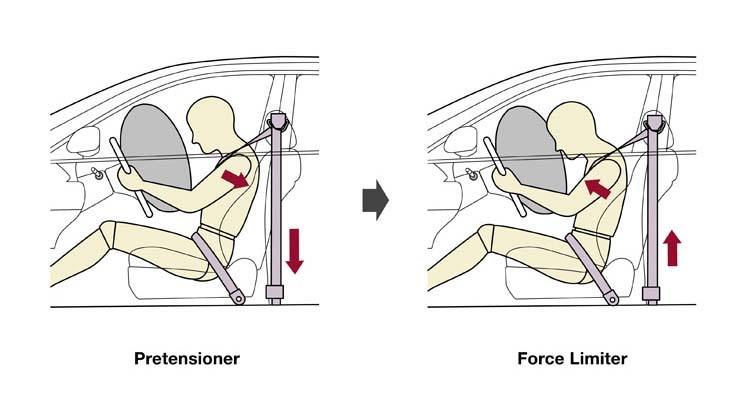 Current-day evolution of seatbelt systems has seen the proliferation of provisions to further manage impact loads, including pretensioners. Very early seatbelts had locking retractors, which allowed the seatbelt to unspool slowly, but held it in place in sudden deceleration like an impact or braking. This premise eventually evolved into pretensioner systems, which use some mechanism to tighten the seatbelt, almost instantly, in the event of sudden deceleration, or a crash. Some pretensioners use an electric motor in the seatbelt spool assembly, and others ignite a small amount of explosive gas within a cylinder, driving a piston or rod upwards to retract the belt in milliseconds. In any case, the purpose is the minimization of occupant movement during an impact. 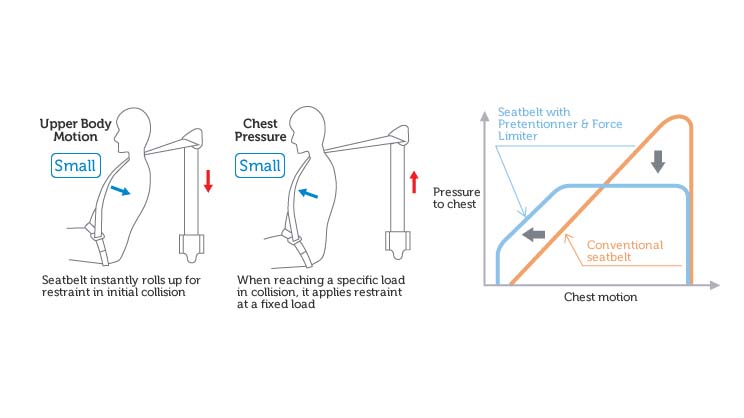 In a crash, it’s important to keep occupants firmly in place with minimal movement—though in certain types of impacts, a little carefully-calculated give can increase safety and seatbelt performance. This carefully-calculated give is the job of the load limiter. Typical examples of a seatbelt load limiter include an extra length of seatbelt webbing stitched into the belt, with stitches designed to break away, releasing a little extra slack, once a certain force limit is exceeded. Other applications use a special torsion bar that twists, unrolling a little more seatbelt, once a certain threshold is breached. The goal? Keeping occupants safe, and working to minimize the likelihood of being injured by the seatbelt itself. 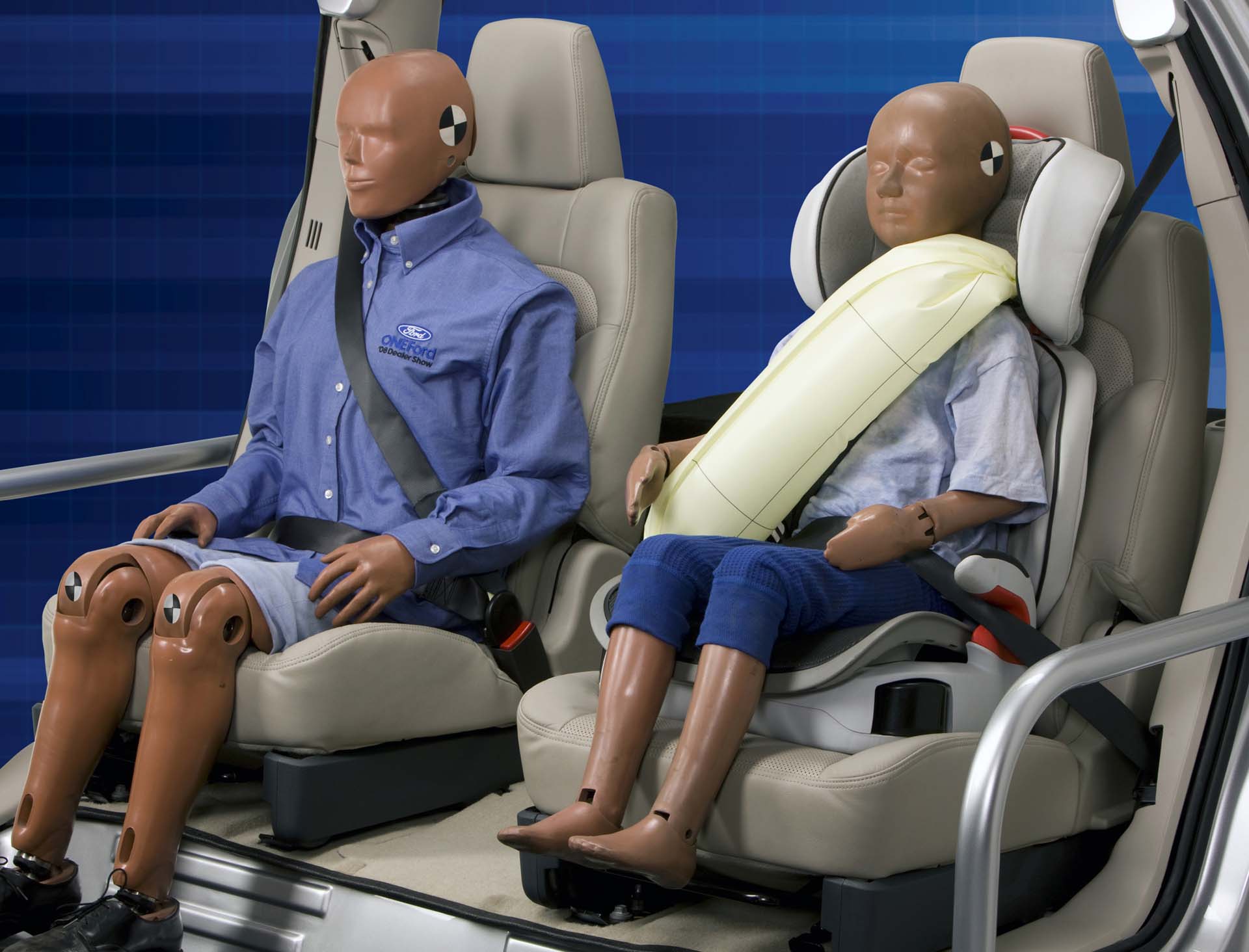 Ford offers a unique safety innovation in select models, with the use of inflatable rear-seat safety belts. In a frontal or side-impact crash, a thin, long air bladder, sewn into the belt, inflates instantly to distribute forces more evenly over the occupant’s torso, reducing the likelihood of injury and providing added head and neck support. Since this form of seatbelt airbag is smaller than a traditional front airbag, it can deploy more gently and slowly. Combining a seatbelt and airbag into a single assembly is one example of modern seatbelt innovation. 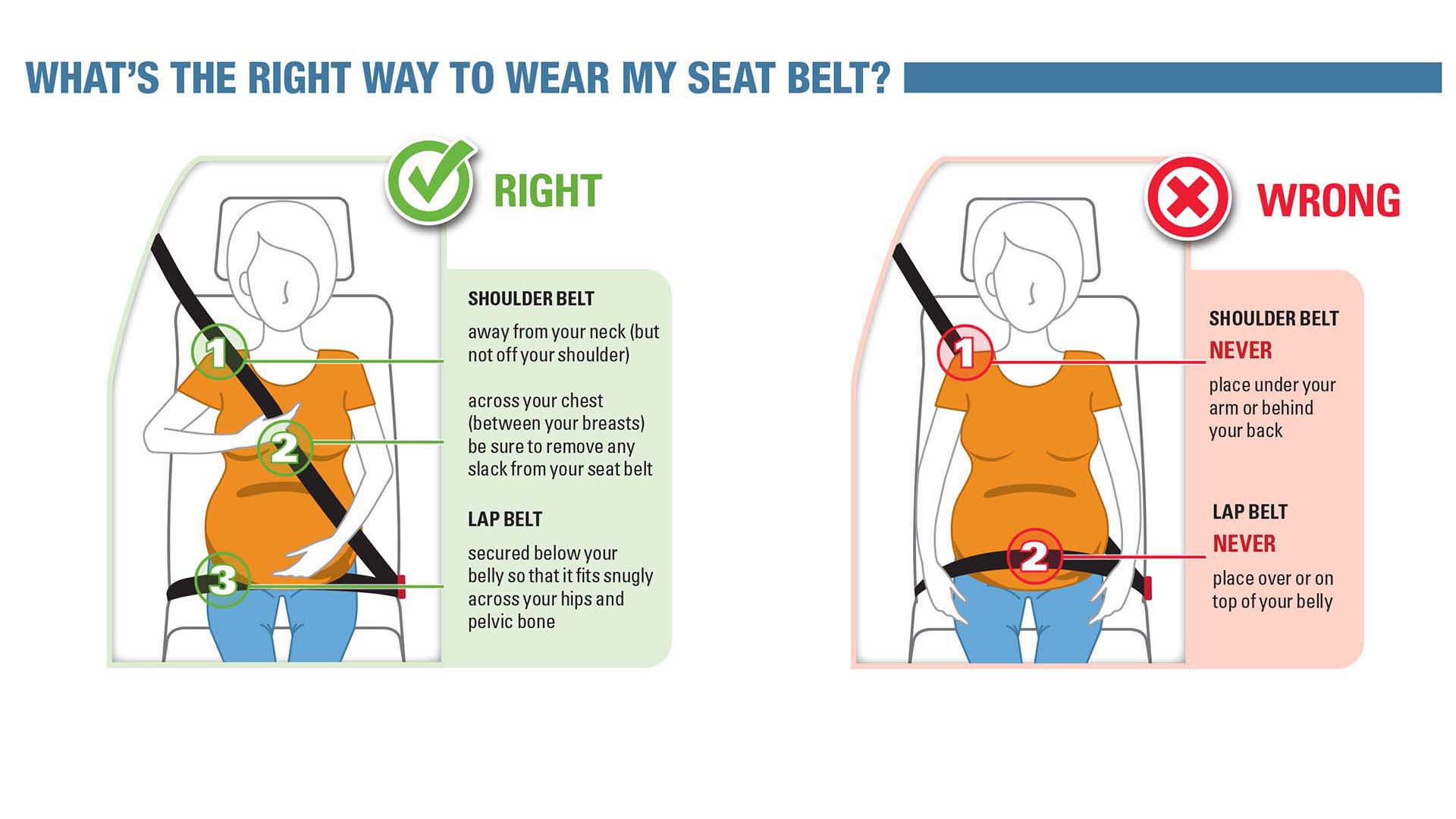 According to the MTO, proper use of a seatbelt involves ensuring the belt crosses occupant chest and lower hip areas, as these areas are best suited to resisting crash forces. Pregnant women should still wear seatbelts too, while sitting as upright as possible and wearing the lap belt portion down low, so it snugs against the pelvic bones, and not the stomach. The MTO advises that drivers should never wear a seatbelt that’s twisted, as it won’t spread crash forces effectively. Further, tucking the shoulder strap under your arm, or behind your back, is a dangerous idea. 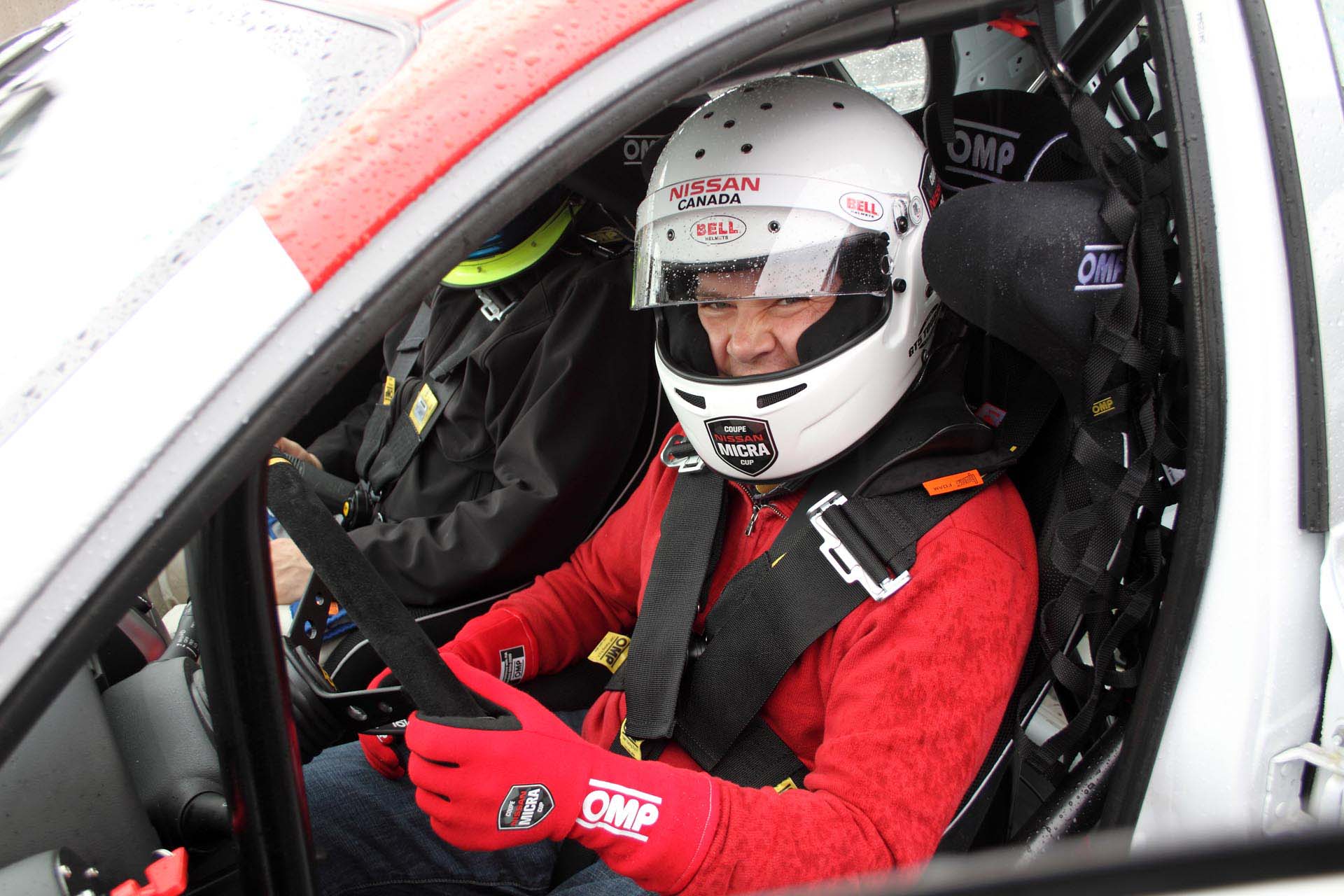 Wear your Seatbelt, or pay!

Across the country, fines are in place for drivers who don’t use their seatbelts properly, or don’t ensure their passengers are doing the same. For instance, in Ontario, drivers can face a fine between $200 and $1,000 if they, or anyone in the vehicle under 16 years of age, isn’t wearing their belt, or fastened properly into a car seat. Demerit points are also in play. The MTO notes that drivers can be fined for having a broken seatbelt in their vehicle, even if it’s not in use.

Familiarize yourself with the proper use and fastening of child seats, as laid out by your provincial transportation authority. In general, drivers are advised to use a seat with the nationally-recognized Safety Mark label attached. Also, ensure the seat you’re using isn’t being operated past its expiry or useful-life date. Up to a certain age or weight, infants are to be transported in a rear-facing child seat. Similar age and weight limits are specified for toddlers, and children in booster seats. Consult your provincial authority for details, noting that children can typically use an adult seatbelt once they can consistently sit against the seatback with their legs bent comfortably over the seat edge, once a shoulder-belt fits flat against their shoulders and chest, and once the lap belt crosses their hips, not their stomach.