Goof of the Month: When Not to Trust a Safety Certificate

This month’s story comes to us from Nick Labrie, an automotive technician in Sudbury, Ontario. It reinforces the importance of paying attention to the way your ride sounds, and not taking unusual noises lightly, even if you feel that your car is ultra-reliable.

Labrie shares a story about a customer who had their older, higher-mileage Honda Civic brought into his shop on a flatbed, with one wheel wrenched so violently out of place that it damaged the vehicle’s fender. A poorly maintained part on this customer’s car caused a small accident that could have been a much bigger one, and also led to a considerable repair bill. 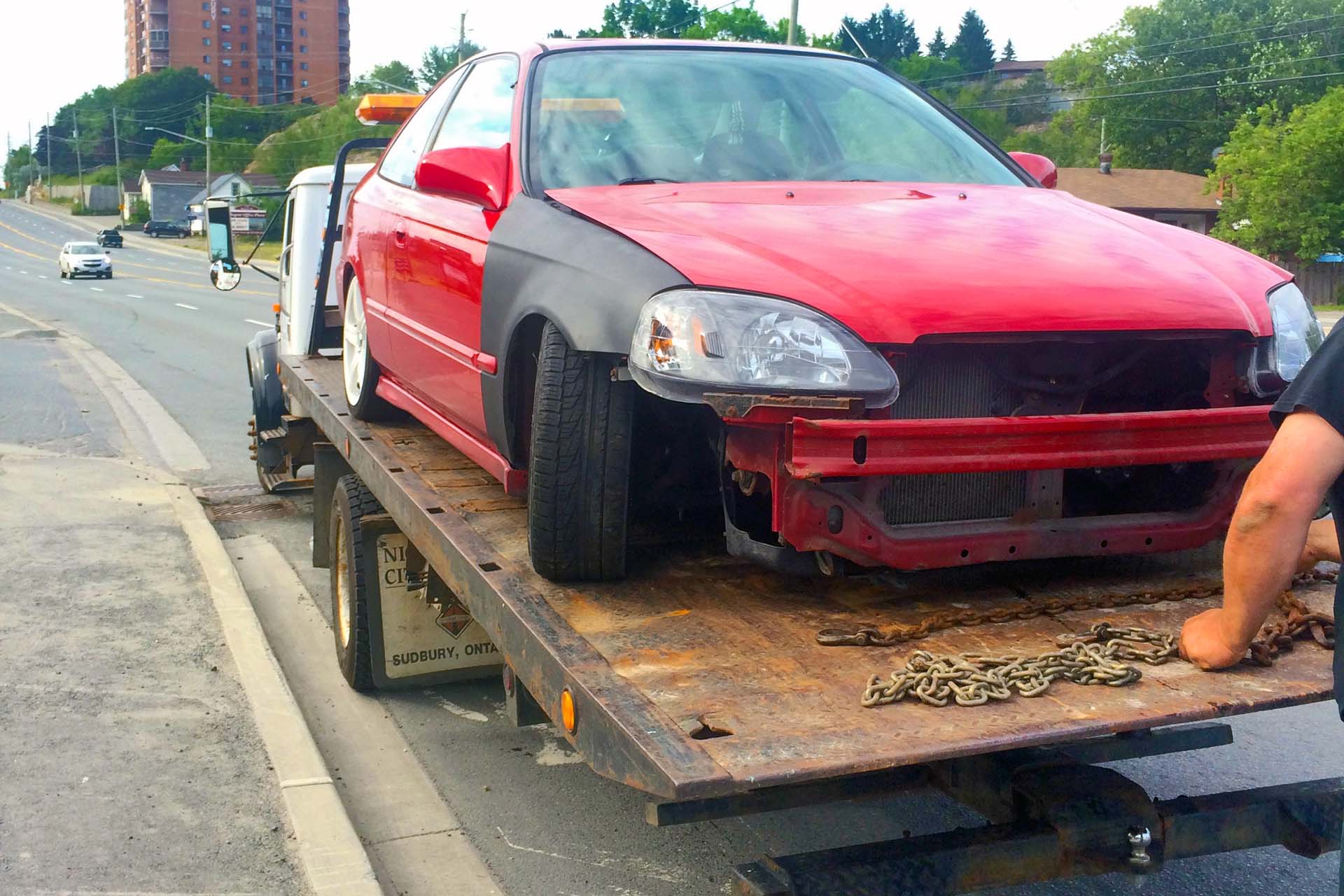 Labrie noticed a few factors that contributed to the vehicle’s eventual involvement in an accident, caused by the failure of a suspension component.

“This customer had bought the car in question very recently, but had been ignoring a clunk from his suspension for almost two weeks since he started driving it,” Labrie explains.

The vehicle was a 1999 Honda Civic with higher mileage, bought by a younger customer, in relatively good shape – except for the suspension. 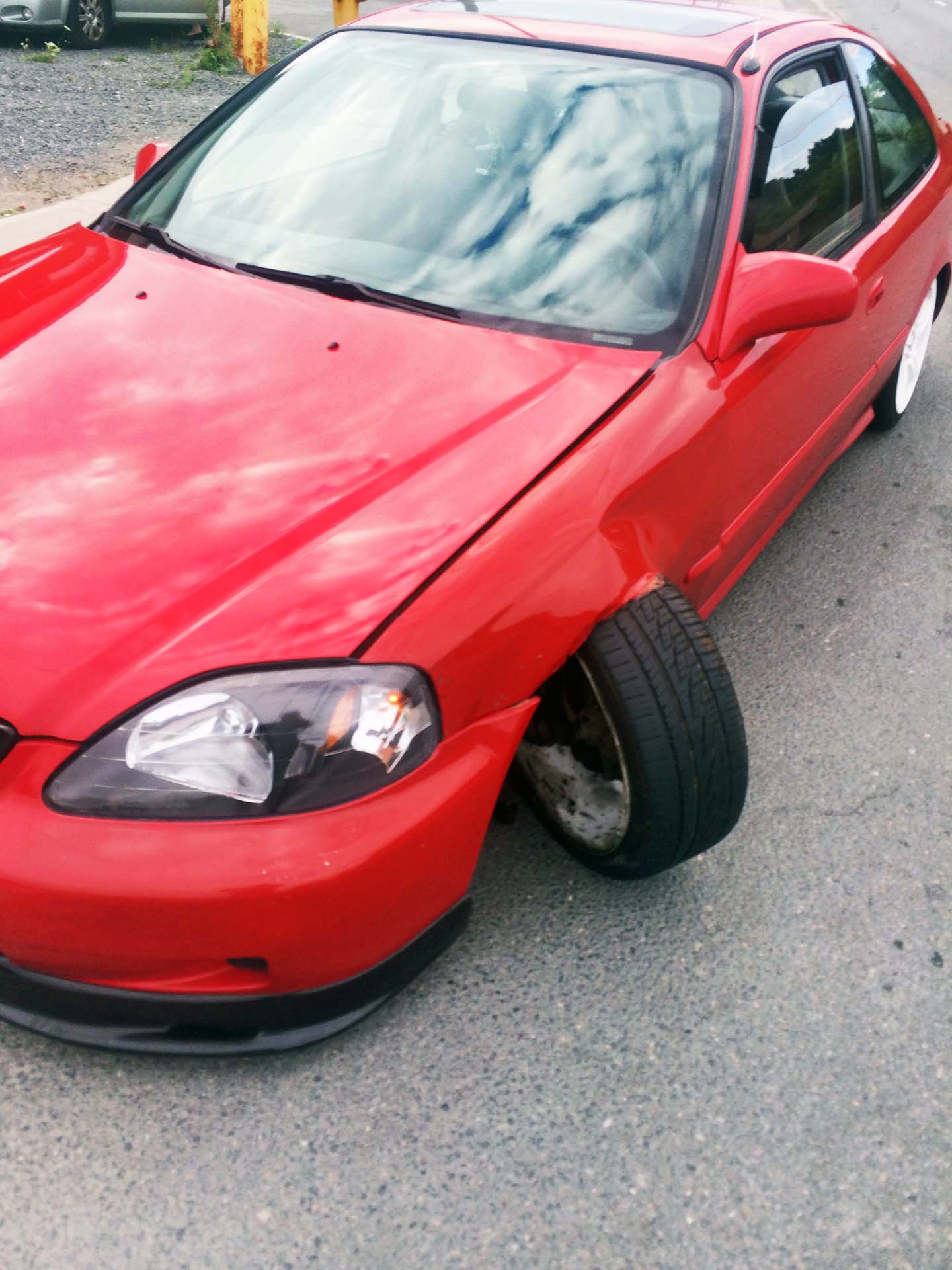 “Ball joints. That’s what pops into my head instantly when I see this,” Labrie notes. “We see this somewhat commonly, especially on older, higher-mileage cars like this.”
Ball joints are a part that’s used to attach two suspension components to one another, while allowing them to move and flex in relation to one another. A ball joint is typically pressed together, and consists of two halves, each attached a different part of the suspension.

“As ball joints age, they wear out,” Labrie says. “They are a part you should have inspected regularly to confirm that they’re not deteriorating. A worn ball joint will typically make a loud clunking noise, and that’s your clue to have it looked at. Ignore it, and eventually the ball joint, and the suspension components that it’s attached to, can separate. This causes the suspension to fall apart, and the wheel to become partially detached, in some cases.”

If you’ve ever seen a car on the side of the road with one wheel wrenched violently out of place, a busted fender around the wheel, and the front bumper on the ground, it’s typically caused by ball-joint failure, or the resulting accident or impact.

Labrie’s customer told him that he suffered a total loss of control, which resulted in his Civic sliding hard into a curb, which destroyed the wheel and tire on that side of the vehicle, and could have injured or killed someone. Thankfully, the customer had been driving at a fairly low speed on an empty road when the ball joint separated.
“Imagine this had happened at speed on a busy highway. The customer, and the car, both wouldn’t have been here to tell the tale, in any likelihood.”

A few factors of note: First, the customer had only owned this car for two weeks, so he hadn’t been ignoring the clunking sound for months, as Labrie says is typical in this situation. Second, the vehicle, apparently, had been sold with a safety certificate, though the mechanic who completed the certificate somehow missed the worn ball joint, if they inspected it at all.

“Absolutely no way that ball joint should have passed safety,” says Labrie. “I suspect the seller was trying to pass off the repair onto the new buyer of this car. Maybe he had a mechanic pal that filled out a safety certification on the side without even looking the car over. Or, maybe he missed it, somehow. But this type of wear doesn’t pop up in two weeks. The failed ball joint is one issue, but to me, the bigger one is that this customer could have been injured or worse. There’s  something fishy with the safety certification here.”

Third? Labrie’s customer said he asked a technician at a local oil-change franchise to check the clunk out a few days earlier, while his new Civic was in for service. That technician said he didn’t see a problem.

“There’s a big problem with this: Mostly, oil-change franchises don’t hire mechanics. They hire oil-change techs. Was the person checking out this Civic – and providing advice – a licensed automotive technician at all? Because if they were, they’d have known that you can’t properly check this type of ball joint while the car is sitting with its wheels on the ground, which it was. It’s important to make sure you get your mechanical advice from an actual mechanic.”

A final note: When Labrie asked the customer why he hadn’t taken the vehicle in sooner, the customer replied, “It’s a Honda, I figured it was probably OK.” This flawed thinking neglects the fact that a vehicle, Honda or otherwise, is a machine built of parts and components that need occasional servicing, attention and replacement. Ignoring issues because you believe otherwise is a great way to suffer an accident.

Labrie’s customer left on his spare tire, after footing a hefty bill for repair of the suspension. The customer later sourced out a new fender from a local scrapyard and installed it, and replaced the wheels and front tires on the car as well. Replacing the ball joint at the first sign of trouble, before it failed, would have literally saved this customer hundreds of dollars. 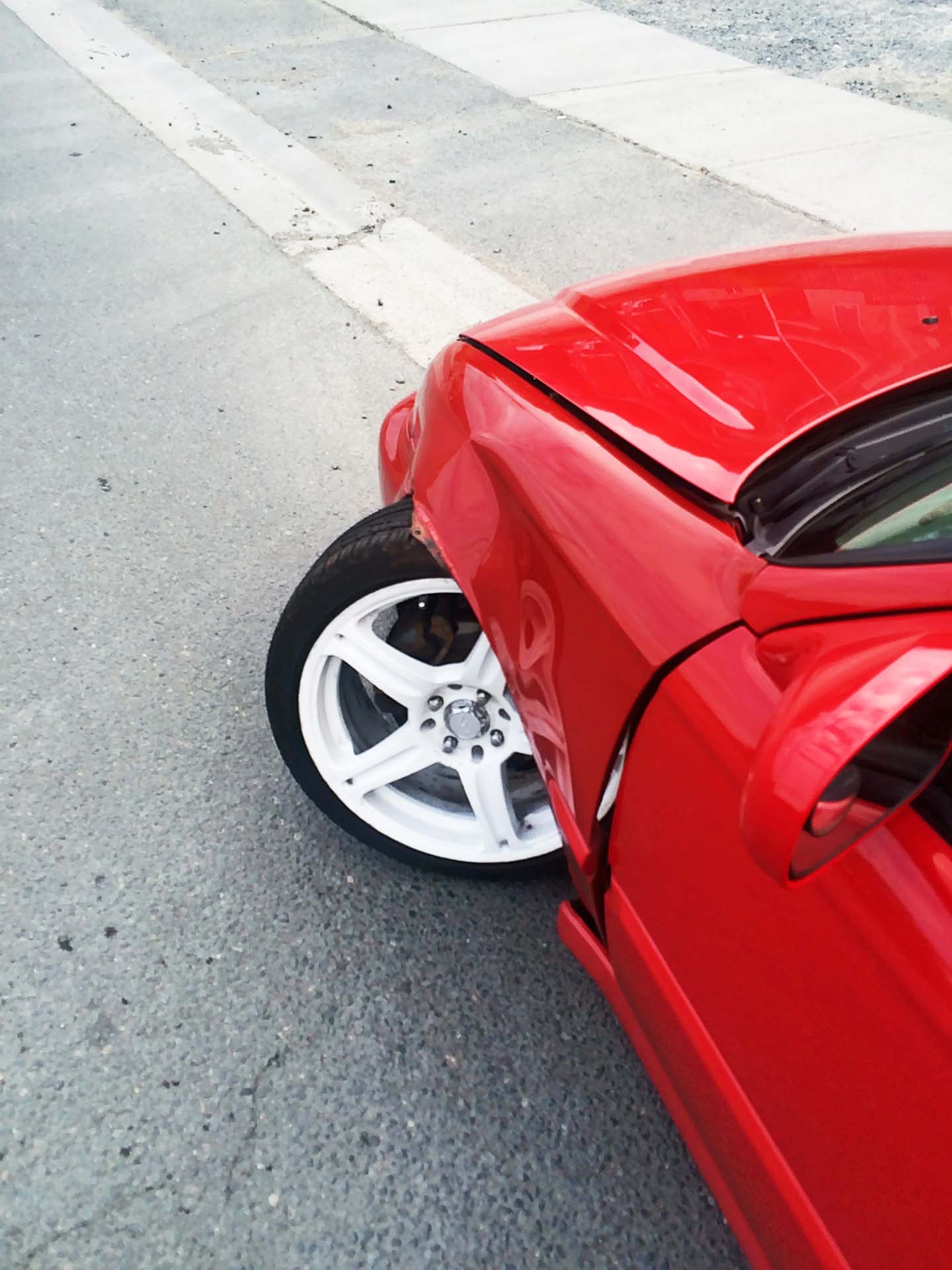 There are a few takeaways from this story. First, if your used car is sold with a safety certification, do your homework and make sure the issuing technician, or shop, is reputable. Second, if seeking mechanical advice about your car, or an unusual noise your car is making, be sure that said advice comes from a licensed automotive tech. Third, regardless of the brand or type of vehicle you’re considering, remember that parts eventually wear out and need replacement.

And finally, as Labrie explains, “Healthy cars don’t clunk. And a clunk means something is wrong, possibly seriously. Take a suspension clunk as a sign to go to your mechanic right away, not in a few weeks or months. It could save you a pile of money, or having a serious accident, in cases like this.”