Are winter tires really important? Yes. Do they actually help you in winter? Yes. Do you need them? Yes. “Yeah but I have all-wheel-drive!” – doesn’t matter. Winter tires are better. Period. The last semblance of doubt has now been eradicated from my mind and hopefully about three minutes from now, from yours too.

We had two tests in Maine that accomplished this: one in regular road cars on regular winter tires, the second a meander off-road -through harsh backroad trails in a Jeep Wrangler shod with BF Goodrich All Terrain K02 tires. It was the first of those tests that was most informative for regular car uses.

Part One: Summer vs Winter in a RAV4 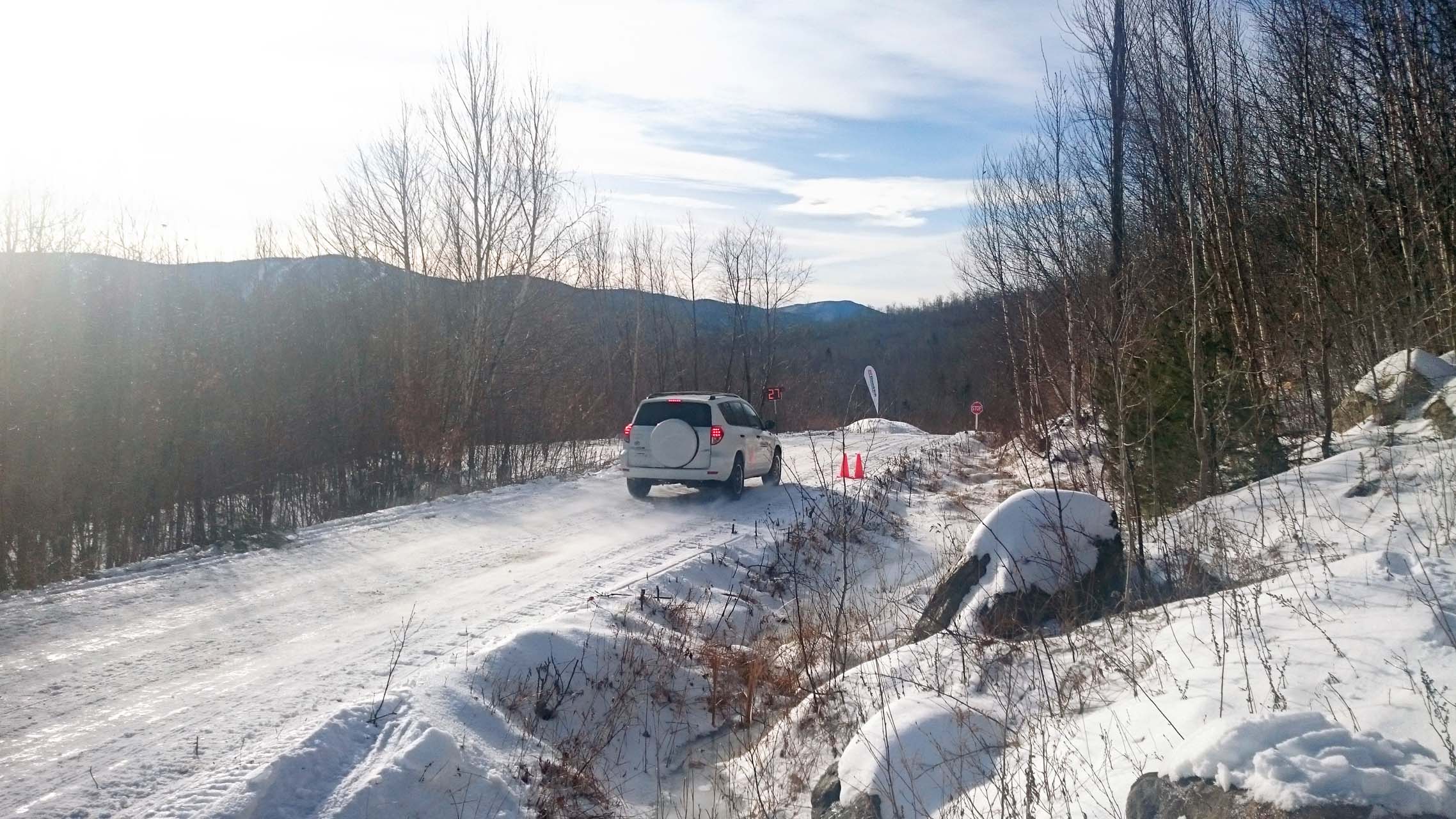 The scene: Maine ski country. The road: snow covered in parts, lightly iced asphalt in others.

The cars: two very old RAV4s, the sort you might see pulling into your local university parking lot, the sort you still see hundreds of out on the roads. One was shod in BF Goodrich’s regular all-season tire and the other, the same brand’s winter tire: the Winter Slalom KSI.

This isn’t a “our winter tires are better than the other’s summer tires,” this isn’t an apples–donkeys comparison, this is a manufacturer putting their own two products back-to-back to show us conclusively that the winter tire works.

The little closed course is simple: Start, drive up to about 60 km/h, brake hard to a stop in a straight line. Then, take off, wind through some curves then brake and make a sharp, left-hand turn and travel up a steep hill. The course tests cornering grip, braking distance, acceleration and also challenges the AWD system enough to show up the tire performance.

My first run is in the car shod with the winter tire. Even without the reference point the amount of grip was apparent as the little RAV4 made its way up to 60 km/h as if it were on dry pavement, stopping I felt some ABS kicking in but the car arrested itself with not even a wiggle. Driving through the next set of curves we had more than enough grip and the car turned up the hill with ease. Winter tires really can make ice and snow feel like pavement.

The next run is in the car with the summer tire. “Woah!” – I couldn’t suppress my audible reaction as the RAV4 scrabbled for grip off the line. From the first braking moment I could feel the car sliding and failed to trust the ABS – an extremely long stopping distance was the result. In fairness, a little of that was because of driver error, rather than get on the brake and stay on I’d wavered on the pedal when I felt it slide. The second stop I two-footed the pedal and let the ABS work, which gave a better result. The difference in feel, confidence and braking performance was still confirmed. 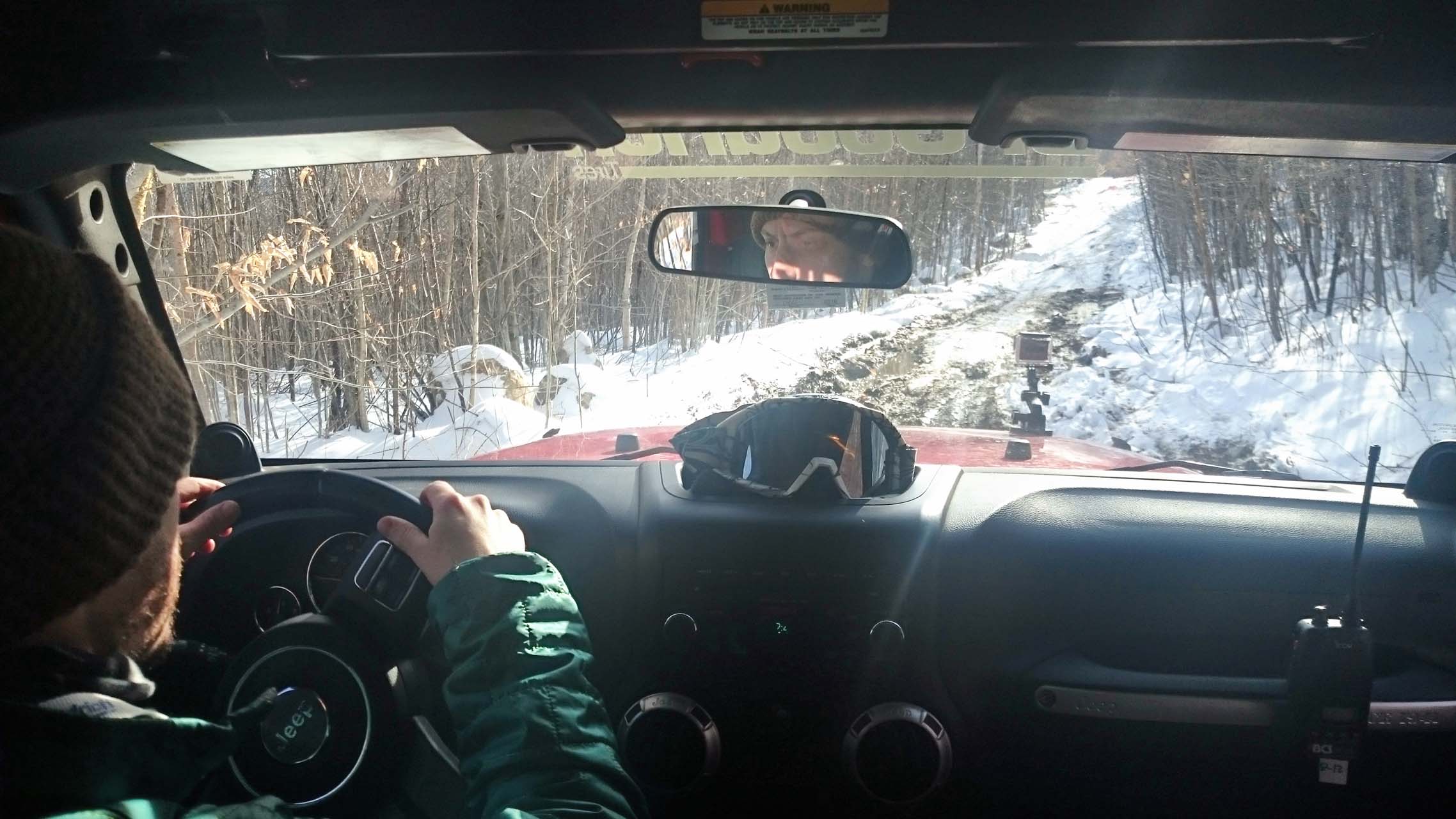 The curves were a lot hairier in the second run, with the turn up the hill downright untidy. Skittishness replaced the earlier confidence and the little RAV4 had to be manhandled up to the turnaround point.

All of which might sound like the sort of fluff and rubbish that auto writers are supposed to dribble about things once they’ve swallowed the convincing PR pitch Kool-Aid… but I have proof.

The cars were fitted with an accelerometer and GPS to measure our stopping distances, the results were clear. You might notice that stop 1 and 2 were also different, that’s because the stopping area was sloped, so the second stop was uphill and the first downhill.

Across three drivers and two stops each (for six stops overall), there was a clear 15 percent difference in stopping distance. In some cases, the difference was 20 feet, that’s two whole car lengths, every day of the week.

That’s enough to save injury, and at the very least save you a pretty serious repair bill. With the way insurance rates jump in this country, one set of winter tires is paid for three-fold if it helps you avoid just one accident.

Part Two: I am an offroad warrior! What can winter tires possibly do for me? 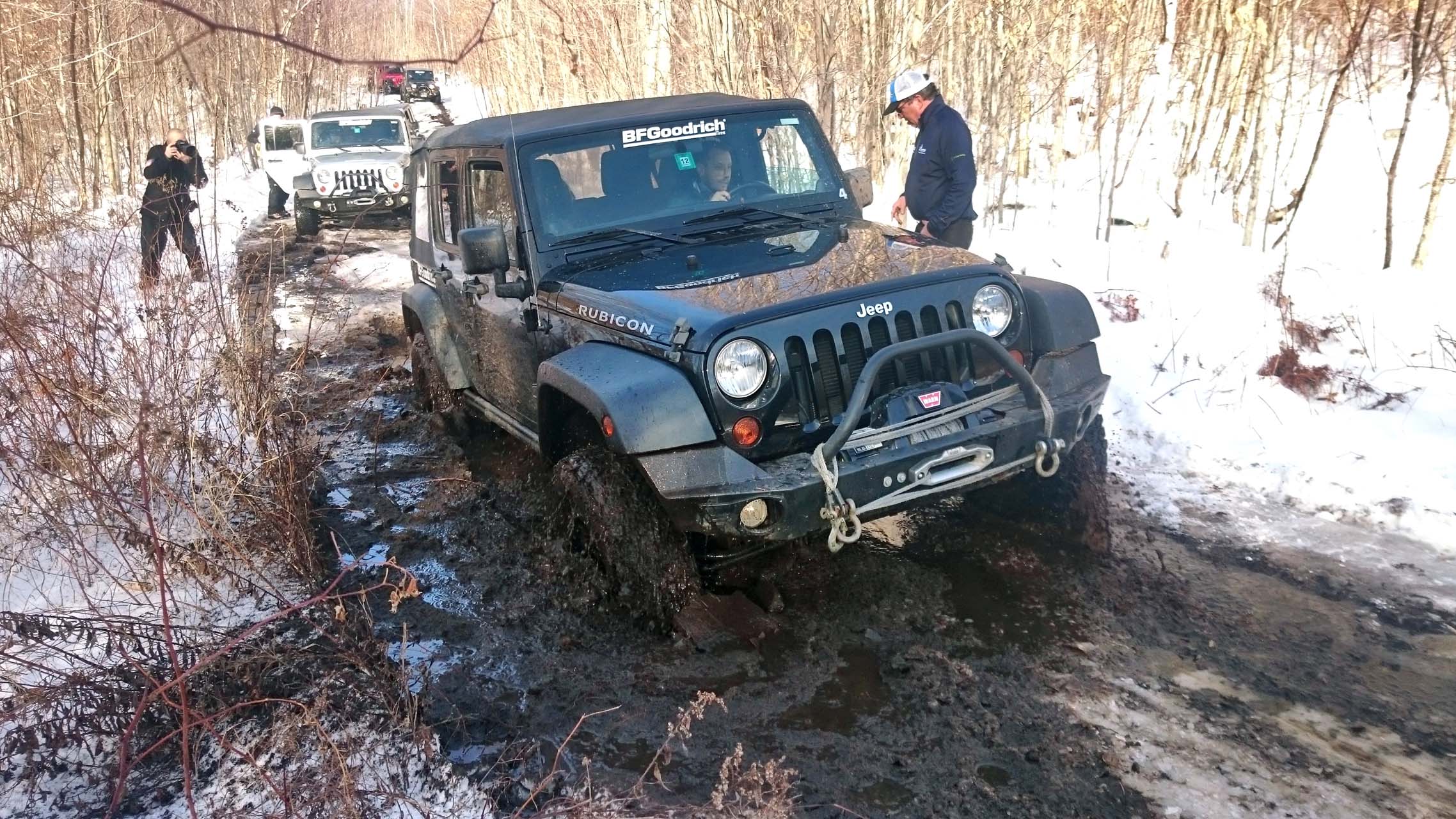 Round two of winter tire testing was more fun than education – but still made a solid point. We took a fleet of Jeep Wranglers through some of the very worst cottage back roads through thick ice and snow. The warming weather was melting some of the ice and in some places we were breaking through mud only to find hard-pack ice underneath.

The instructors were insistent that we not use any of the usual techniques – forcing us to do otherwise silly things, like stop on slopes, and proceed extremely slowly through uncertain mud patches. Each and every time the Jeeps effortlessly pulled forward, the tires’ sipes, shoulders and grooves clawing at the ground. Who needs tracks?

Only once did we get stuck, and it was when the Jeep we were in (driven in that moment by a colleague) broke through a sheet of ice and dropped into about a foot of mud and slush – the thick ice sheet at the same time formed a sheer wall that the front tire wasn’t able to get up over.

Even then, with one gentle tug backwards a few inches we were free and able to clamber out of the quagmire. The six jeeps behind us had no issues at all.

BF Goodrich say this latest generation of all-terrain winter tire gives 10 percent better grip in mud and 19 percent in snow, courtesy of an updated serrated shoulder, “mud-phobic” bars in the shoulder and locking sipes which are multidirectional. 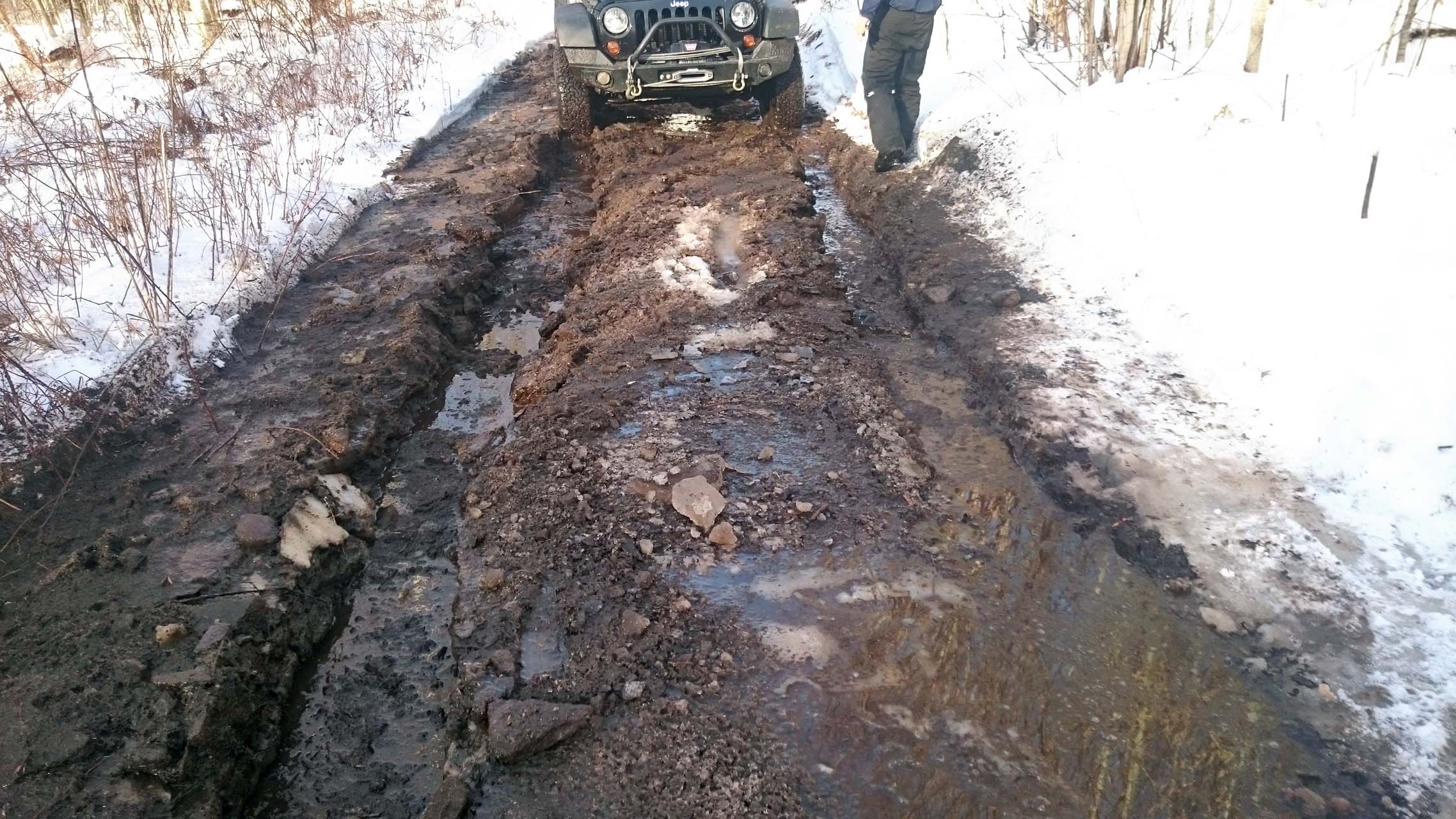 They also say that the footprint has been designed to dissipate heat better, and coupled with a revised rubber compound over 100 percent more mileage on gravel and 15 percent on asphalt.

The shoulder rubber is now thicker too, and the shoulder even more pronounced, which we’re told will help avoid shoulder damage on rocks and hard ice – given the rut of jagged ice we got stuck in and then out of, I’d say this one rings true.

All I know is, equipped with K02s and the Jeeps, we were able to make our way to the top of a pristine mountain range, gazing out across the pine-filled slopes with sheer awe.

Nature is beautiful – when you can get to it.