A Behind-the-Scenes Look at Winter Tires More than rubber and air.
Advertisement

More than rubber and air. 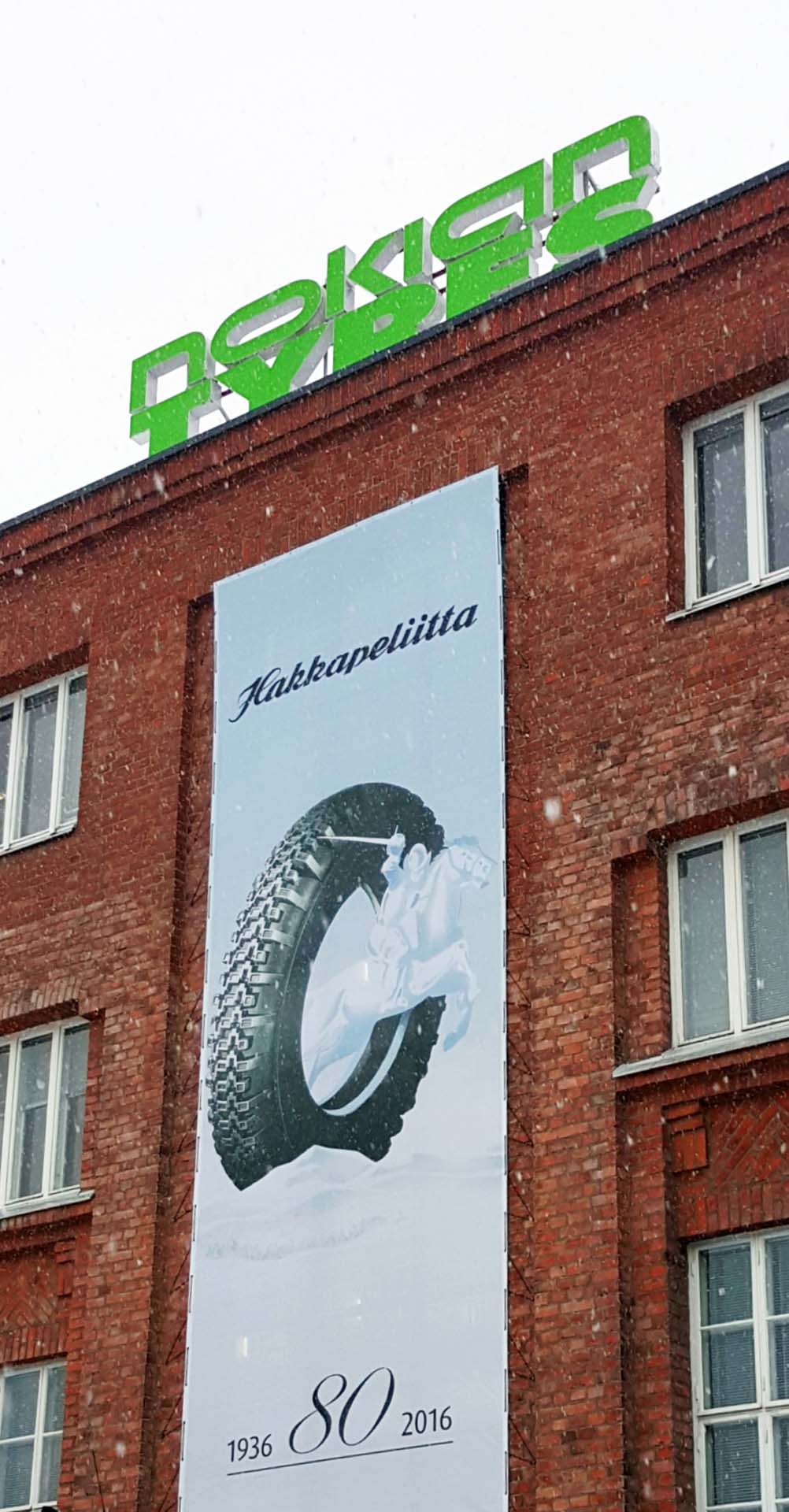 The Nokian factory in Nokia

Nokia, Finland – A friend of mine who has travelled throughout Europe told me that Scandinavian countries have the most Canadian vibe of the bunch. Landscape and climate have a lot to do with it, of course, and one might reasonably expect that those similarities mean that we would share buying habits with these folks when it comes to cars. Well, one might be wrong.

Visiting Finland is like going to a place where everyone that has ever asked me what kind of car they should buy, and whether they really need winter tires, actually listened. Wagons with winter tires: that’s all a family needs, and here they’re everywhere. Oh, and by the way, what’s a pickup truck?

And I was surprised to learn that there’s no such thing as an all-season tire in Europe. Who knew? Apparently everyone here does.

And that brings us to why I’m here: Finland’s tire company, Nokian, offered up an opportunity for two Canadian journalists to tour the company’s original production facility in Nokia and visit their Arctic testing facility in Ivalo. Senior editor Jonathan Yarkony thought I just might be interested in taking the assignment. “Does a winter tire have sipes?” I responded. In case you’re wondering, the answer is yes.

I’ll start by making a motion: I hereby move to abolish the all-season and “M+S” designations from all tires sold in Canada. Call them anything else: three-season, summer, wet-and-dry. Whatever the new designation, it will need to be accurate, because all-season is certainly not. For some guidance, let’s look at how passenger car tires are categorized in Europe.

There are four types, and Nokian offers one of each in the Canadian market. The first is a summer tire that, if you were to draw analogies with what we drive on in North America, would encompass summer and all-season tires as we know them. These tires are simply not used in the winter. Nokian’s version is the eNTYRE. It’s marketed in North America as an all-season tire, only because that’s the category in which it competes. The tread before it becomes tread

Next is the Central European winter tire, intended for use in mild winter conditions, and in North America are marketed as “all-weather” tires. The key difference for our market between these and dedicated winter tires is that treadwear warranties are offered on all-weather tires, enabling year-round use. All-weather tires available in Canada were unique to Nokian for several years (the WR G3 is their current offering), although some others have joined the fray: most recently, Toyo introduced the Celsius all-weather tire to the Canadian market.

Let it be known that the Michelin X-Ice winter tire carries a treadwear warranty as well, but that warranty is contingent on winter use only and covers a much smaller distance than all-weather tires provide.

And then there are the tires for which Nokian is best known: Nordic studless and Nordic studded. These are dedicated winter tires and are sold under the Hakkapeliitta name in our market and internationally. I first heard about these tires (Hakkas, for short) when I used to devour Dad’s car magazines in the mid-‘80s and Car and Driver gave them props for getting their long-term Audi 5000 (a front-driver) through a harsh winter. I guarantee you that their unique name is what branded the tire in my psyche for all those years.

Fast-forward a couple of decades and I’m reviewing winter tires, looking for the best options for Canadian drivers. I looked up Nokian Tires (or Tyres, if you want to be proper about it) and found myself speaking to a lovely lady who was with the company’s North American PR office at the time. When I asked her how the name Hakkapeliitta is properly pronounced, she said, “if it sounds like ‘have a fajita’ then you’re pretty close.” As charming as that southern-drawl rhyming game was, it sounds distinctly different when spoken by a Finn. The language’s typically long words require more of a rhythm, and a brief pause on the first and fourth syllables in this case, for it to sound right.

The Hakkapeliitta 8 is the company’s current studded winter tire, while the R2 is their studless offering. The R2 competes against the big names in our market: Blizzak, X-Ice, and the like.

Studded tires are the norm in Finland, but aren’t expected to gain mainstream acceptance here for the simple fact that some provinces ban them outright and other jurisdictions restrict their use. Still, they’re available, and in Manitoba their use isn’t restricted on public roads during winter but parking garages often prohibit them due to the damage the studs can cause on the surface of the parking deck.

I was surprised to learn that the first Hakkapeliitta tire dates back to 1936. And this geek got to see first-hand how they’re made. 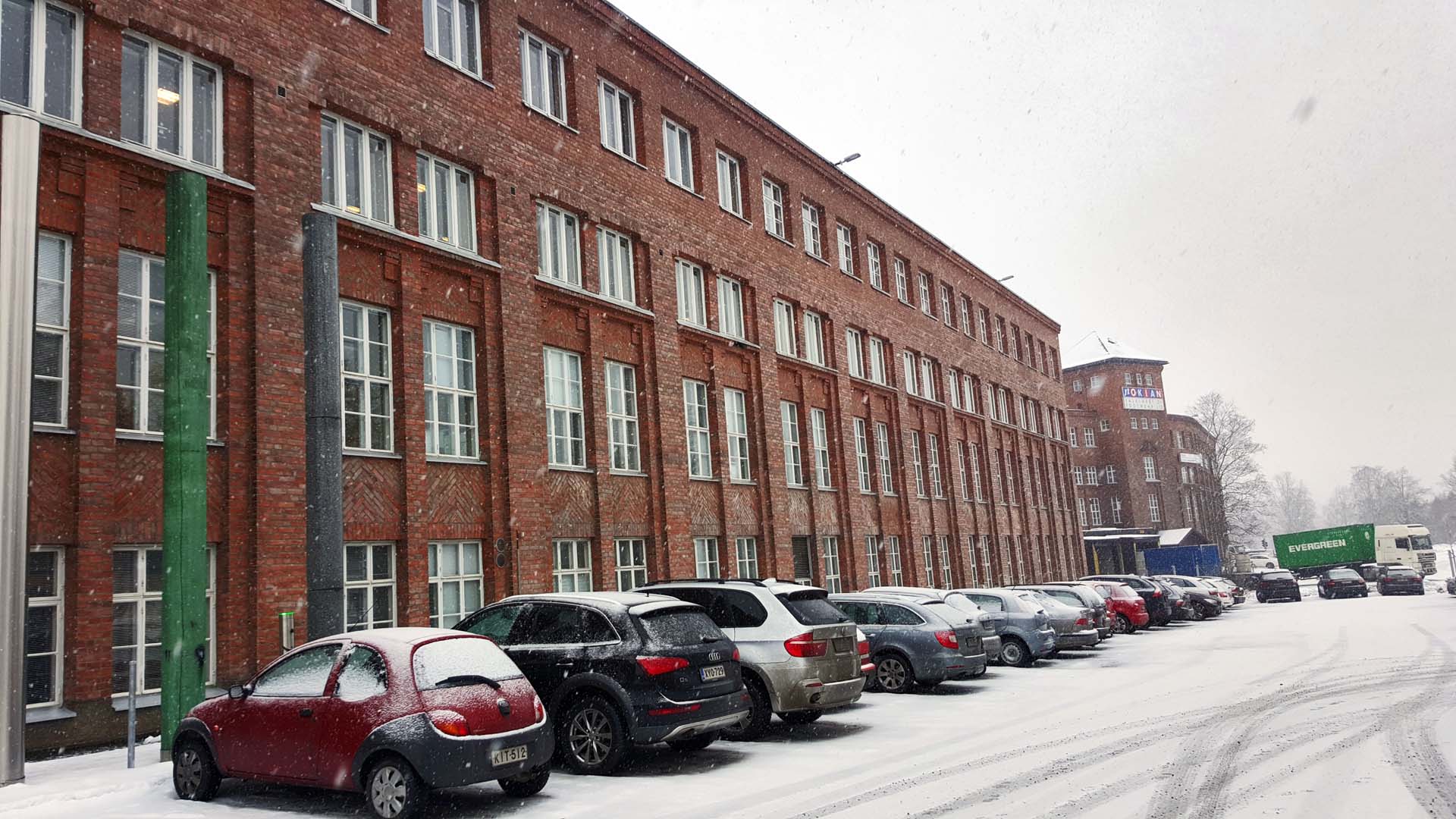 Outside the factory in Nokia

The original production facility is located in the town of Nokia, located about 200 km north of Helsinki.

Driving up to the factory, it’s clear that the building is from a different era, looking more like a prison if not for all of the windows. A good part of the original 1945 building remains, but it has been added to time and again over the years. The facility is hemmed in by water and other development and is simply maxed out, with a current production capacity of 2.5 million tires annually.

In 2005, the company opened a second production facility in Vsevolozhsk, Russia, about 600 km southeast across the Gulf of Finland. With a current output of 15 million tires and room to expand, the state of the art for production for this Finnish company is actually in Russia. Both plants produce all types of tires and both have the latest production equipment; there’s just more of them in Russia. R&D, the company is quick to point out, is contained completely within the Nokia facility. The basics of tire construction don’t change a whole lot across the industry, but there are nuances to the process and materials that keep them competitive and always in a race to produce the best. Nokian lays claim to more winter tire patents than any other tire manufacturer, and indeed, 73 percent of the company’s passenger tire production is made up of winter tires.

Individual components are common to all tires: bead, tread, sidewall, nylon and steel belts. One thing I didn’t know is that the structure of a sidewall—affecting handling and load capacity—is defined by a firm rubber ring called the apex, which is actually nested inside the sidewall during the tire assembly process.

All of these components are fabricated individually and brought together on the assembly machines. There are a couple of different types of these machines, all producing the same quality of product but requiring different levels of worker involvement and thus achieving different production rates. Refinements have been implemented over the years, but the real competitive advantage lies in the secret recipe: the rubber compound. In all the years I’ve been reviewing winter tires, I’ve received nothing more than hints and new marketing names for what it is that decides how the rubber meets the road. As expected, this tour proved no different. I can reveal that they have 50 recipes for rubber compounds in production at any given time, and up to 12 can be used in a single tire.

I can tell you that the tread component of the Hakka R2 uses the most natural rubber owing to its pliability at low temperatures, but it needs to be mixed with synthetic rubber to give it some other desirable properties, like wear performance. I could talk about the “Cryo Crystal” particles in the tread that act like tiny studs in a studless tire, but of what are they composed? Nice try, they say.

The Finns are proud of the niche they’ve carved in the passenger car and SUV winter tire market. They don’t compete with some of the better known brands purely on price, but rather the balance between price and performance. And by the way yes, you do need winter tires.

See more
A lifelong car nut, Haney Louka has been a journalist member of AJAC since 2001. He is a professional engineer and has been on AJAC’s Technology of the Year panel since 2010.
Advertisement