How To Drive in Winter’s First Snowstorm We get some pro tips from our winter driving guy about how to be safe and confident, and how not to be a total dumb-ass when driving in...
Advertisement

We get some pro tips from our winter driving guy about how to be safe and confident, and how not to be a total dumb-ass when driving in...

As an auto-writer, it’s my job to wave a finger, to make tsk-tsk sounds, to push the importance of winter tires, to talk about how too-fast driving in the snow, and to reinforce how slowing the hell down dramatically decreases your chances of roundhouse kicking a hydro-pole with your Taurus when the going gets greasy.

Yes, yes. Winter tires make your car safer through improved braking and handling performance in the snow. Physics and science say so. This isn’t debatable: it’s a fact. Anyone that tells you otherwise is more full of crap than the dog park after the snow melts in April, and the concept of traction and grip flies so far over their head that it needs a passport.
Another fact: slowing down in the snow, regardless of the presence or absence of winter rubber on your ride, two-wheel drive or four, or whether you consider yourself a 9/10 driver, or a 2/10 driver in the snow, will make your drive safer, too. That is, provided, you slow down reasonably, and not to the point where you have a two-mile train of ticked-off motorists behind you.

Confidence is key in winter driving success, after all. Confidence, not aggressiveness. 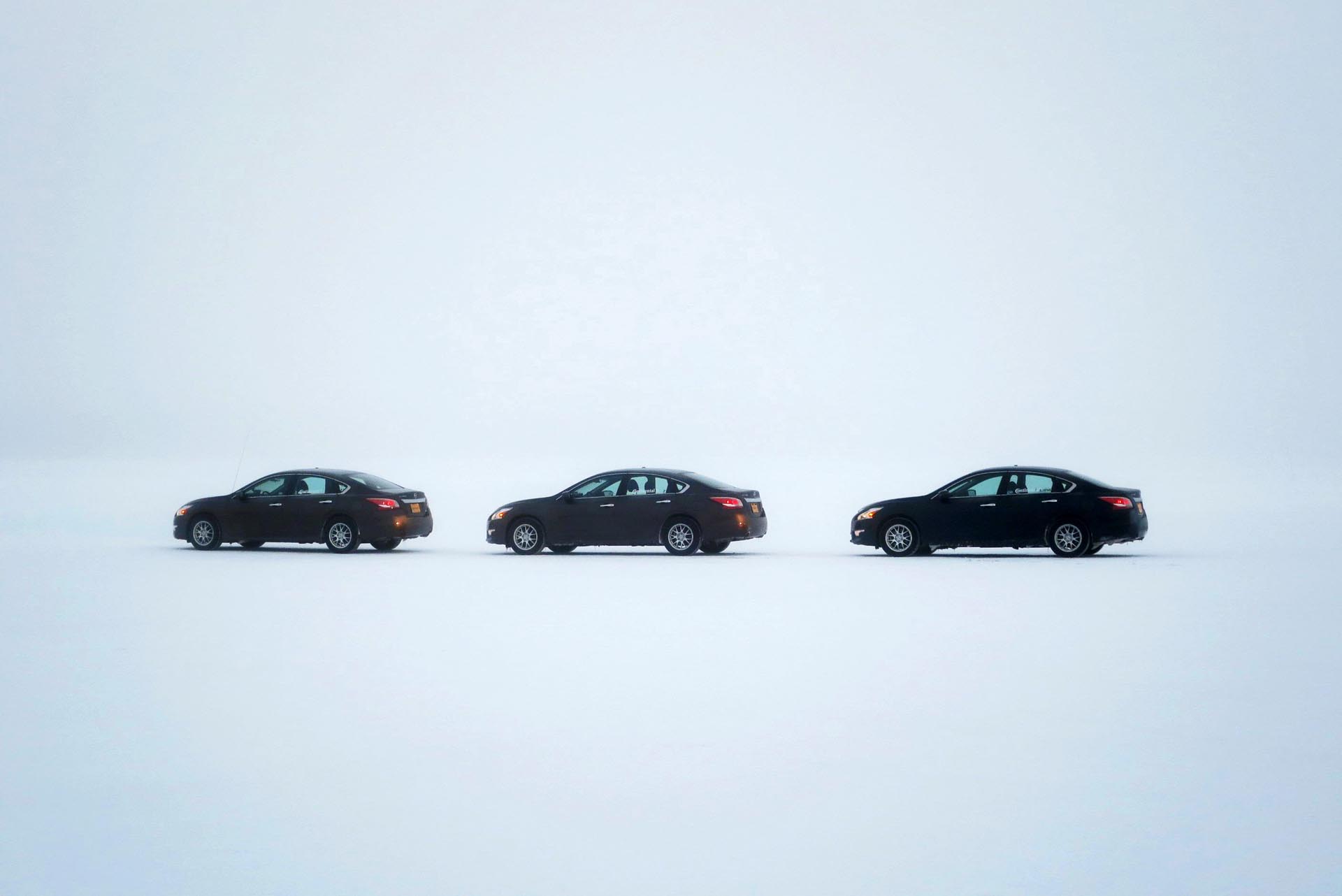 In the all-important first snowstorm of the season, it’s the sensibly-confident driver doing 5 km/h under the speed limit who will get where they’re going without incident, rather than the horrified driver going 30 under and clenching the steering wheel with a two-fisted death grip in anticipation of a fiery skid-related death.

(I have a friend who resembles this. When this friend’s vehicle began skidding on an icy corner, said friend released the wheel, put hands in the air, and proclaimed “I DON’T KNOW WHAT TO DO!” Scary thing is, this friend might resemble a majority of drivers with which you’ll share the road. Be aware of this.)

As someone who spends a lot of hours and miles in a lot of different cars on wintry highways every week, I’d like to share the following facts, observations, tips, dos, and don’ts

ahead of the sheet-metal smash-fest that is the year’s first snowfall. Observing of the following suggestions will help ensure you and yours get where you’re going safely this winter driving season, without becoming introduced to a piece of highway infrastructure.

PRO TIP: That first winter storm is going to be a doozy. Even if it’s not, people will act that way.

Prepare for mayhem. More than half of your fellow drivers won’t have their winter tires on yet. Snowplows and salt trucks will be running late. The Weather Network will flash headlines like “SNOW TERROR MAYHEM” on screens everywhere, and everyone will lose their minds. Cars will be destroyed, and later that evening, a queue of tow-trucks carrying bashed-up vehicles (mostly pickups, in any likelihood), will be lined up at local collision repair shops.

Don't drive if you don’t have to, especially if you haven’t put your ride’s winter tires on yet. You may be capable of successfully driving in the snow on all-seasons, but many of your fellow motorists aren’t, and if you head out anyways, your risk of an accident climbs faster than an over-caffeinated squirrel. Don’t forget: it’s not only you that you’ve got to worry about. 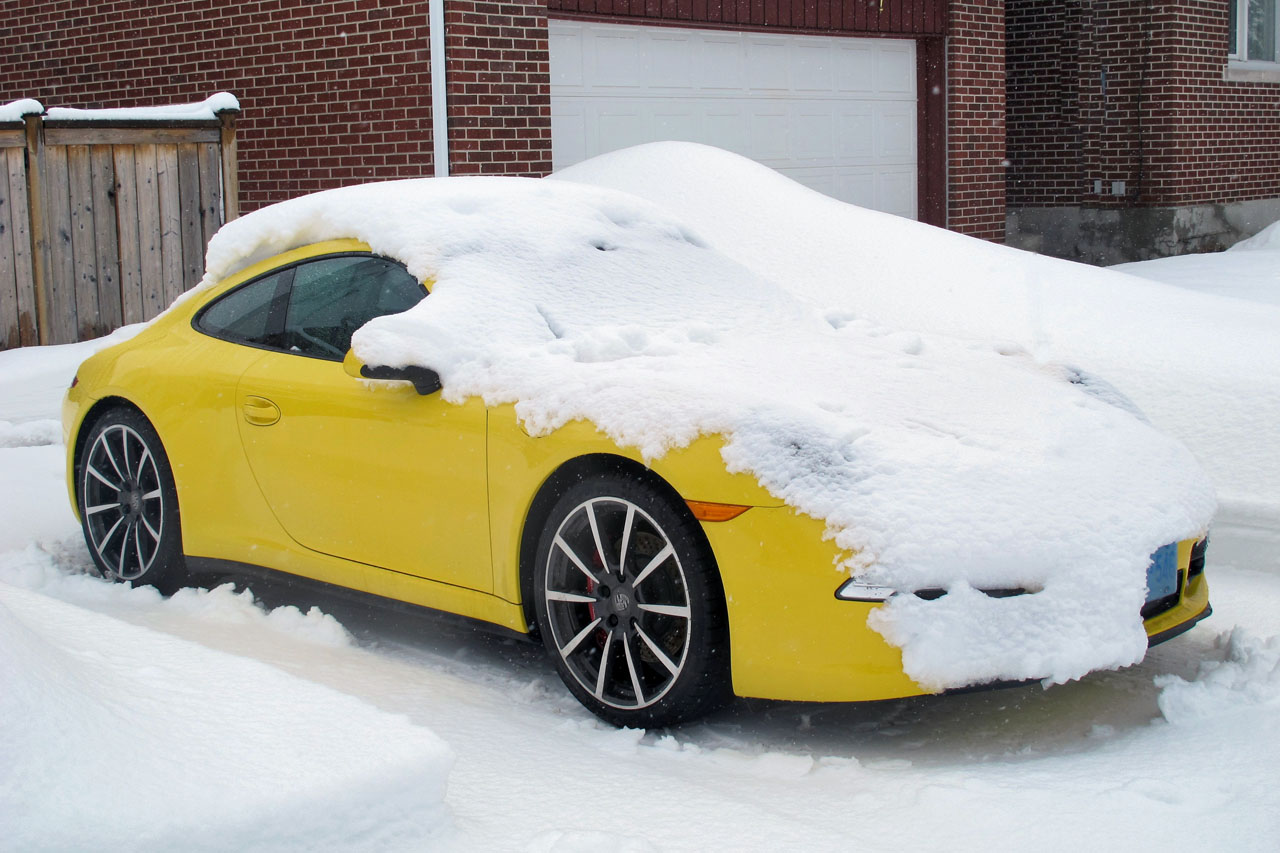 PRO TIP: Don’t drive in winter if you’re ready for a nap!

Plan your meals, sleep and activities around your long trips. Do whatever your body likes to stimulate its energy levels before heading out, and while you drive. Pull over and do a little stretch? Open the windows for some fresh air? Blast some Peter Gabriel? Also, eat small and healthy snacks with complex carbs that are easily digestible and help maintain blood sugar and energy levels on the road. After all, being alert is key to making fast decisions, benefitting from quick reflexes, and keeping your head up and your eyes far up the road for early warning of hazards.

Don’t stay up watching Netflix till 1:40 am, suck back a gallon of double-double for breakfast, and expect to be alert three hours into your drive. Don’t eat the triple-bypass drive-through burger for lunch on the move (ahem…. ahem… Jonathan Yarkony), because it takes huge physiological resources to digest, and will put you into a grease coma. Keep your eyes protected with quality driving glasses for reduced strain, too. You’ll notice the benefits later in the day if you do. It’s all about staying alert and keeping your eyes up the road for the entire trip, not just when setting out.

Leave more time to stop, for crying out loud. Also, install winter tires, which physically increase the grip between your ride and the road, and can literally slash car-lengths from stopping distances, meaning the difference between stopping at a red light, or blowing right through the crosswalk and hanging out in the middle of the box. Also, do remember that tailgating in winter is one of the best ways possible to wind up on the news as part of a multi-car pileup. Oh, and green means “go”, unless you’re at a green light in a snowstorm, in which case green means “Stay put until you’re 197 percent sure there isn’t a logging truck about to blow the red light.”

Don’t apply your brakes at the last moment. Here’s how: stay alert, sit as upright as possible, and keep your eyes up the road, as far as you can. This way, you can brake earlier when a potential issue is spotted. Also, play a little game when you come to a stop sign or red light, pretending there’s a transport truck stopped ahead of you, and that you need to stop a transport truck length earlier than you really need to. This way, you’ve got extra space to work with if the intersection is extra-slippery, which they usually are. This game is fun, free, and may prevent you from becoming a bumper-ornament on a real-life 18-wheeler. 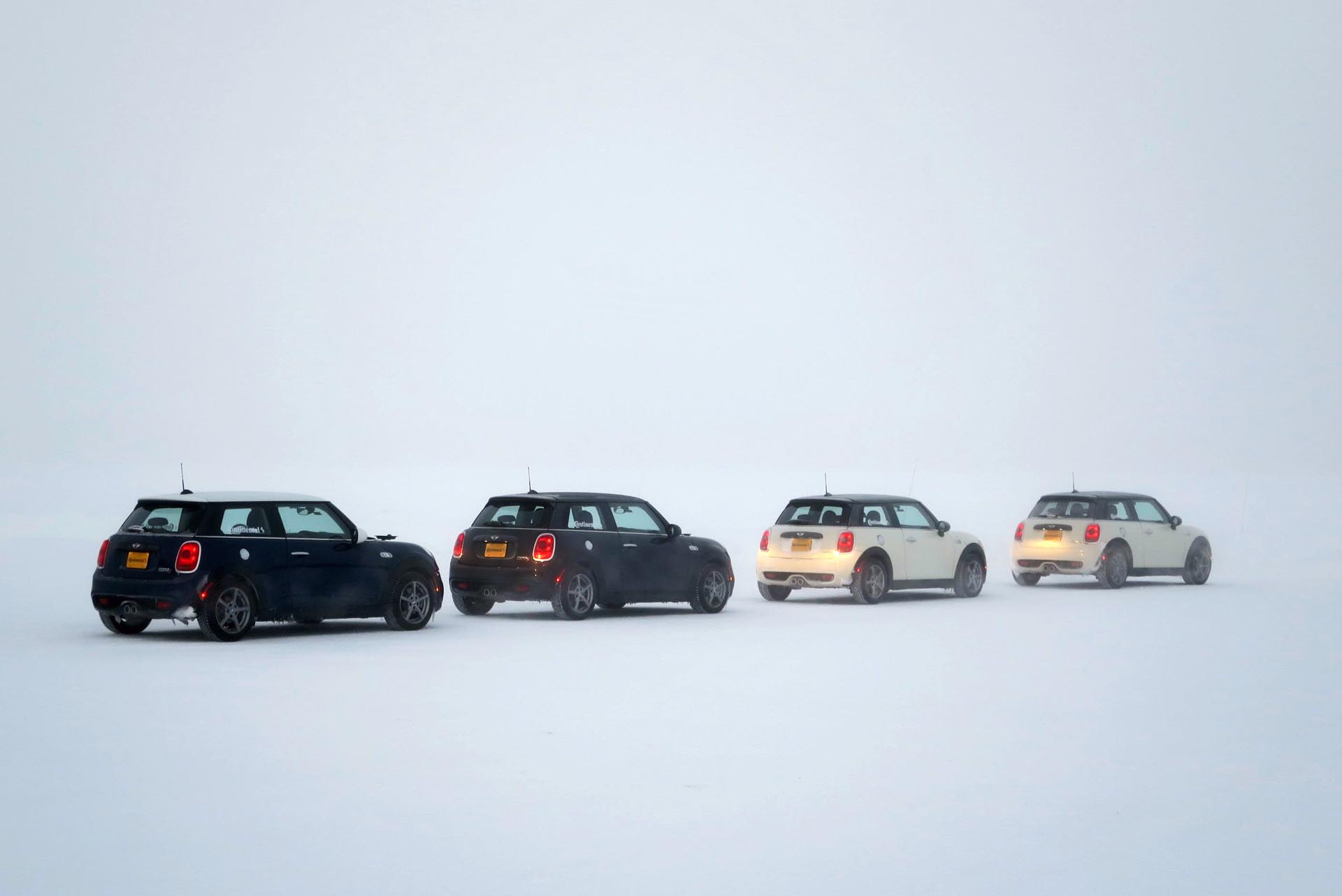 Proceed from a stop sign or red light when the road is clear, and as a courtesy to other drivers, activate your brake lights, with even a slight touch on the pedal, far ahead of an upcoming stop which they may not see. Brake lights send a clear signal at the speed of light to drivers behind you, even far back up the road.

Pull out of a light or stop sign with just a few car lengths to spare if there’s a car coming—even if you have studded winter tires, AWD and an 800 horsepower STI. Why? Because whether you can get away from the incoming vehicle fast enough or not, you’ll likely startle the other driver, and could cause an accident. Pulling out with minimal room to spare in winter driving makes you what’s referred to, in numerous cultures, as a ‘jerk’.

PRO TIP: Being able to see is very important!

Clear your windscreen. And clear your damn roof and lights, too! Change your wipers. Check your lights for burned-out bulbs. Flush that summer washer juice from your tank and re-fill with a quality washer fluid that’s winter-ready, like Rain-X de-icer. Replace crappy wiper blades if they’re crumbling and worn. It’s all about being mechanically prepared for the conditions. Good visibility increases the chances of you picking up on a hazard early, and can make it easier for other motorists to see you.

Be the idiot looking out through a frosty peephole in the windows while driving down the expressway at 9:45 pm with their lights blanketed in an ice-crusted block of snow. Until this sort of driving results in license suspension (which it should), you’ll spot a few of these guys every week. On lighting, here’s a fun trick: determine if your family car has automatic lights. If not, determine if the headlights will turn themselves off after a moment, when the car is shut off. If either of these is the case, obtain a piece of duct tape and use it to secure the light switch in its ‘ON’ position, thereby ensuring the safety of all other drivers in your family, and those around them on the road. 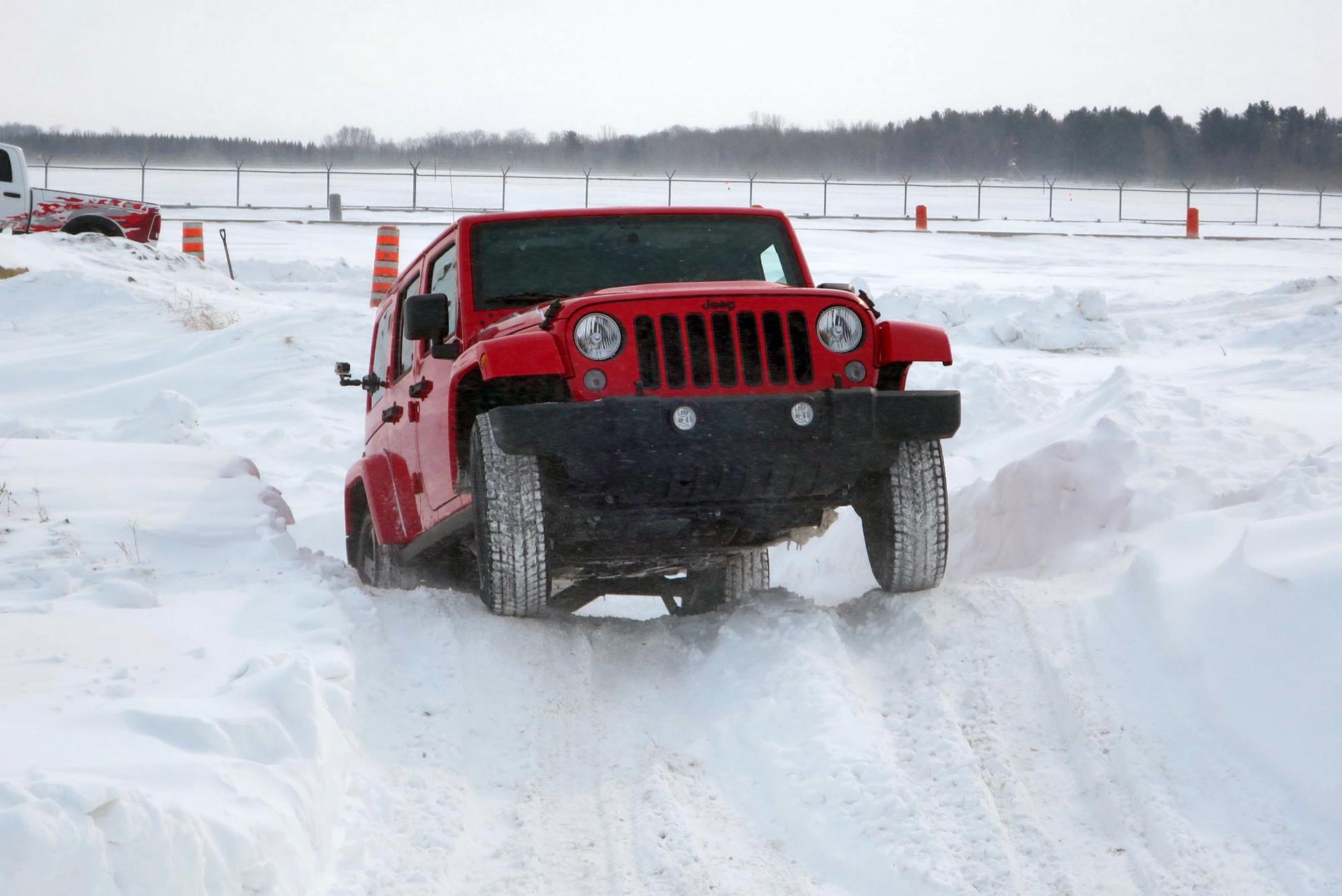 You’re a manly man. You have a frightful-looking beard, enjoy steak and lumber, and use urinals with a wide stance and one hand on the wall above. Also, you drive a big-ass SUV. Still, use anti-lock brakes, traction control, AWD, stability assist and other support systems as they’re intended, which as an extra layer of protection that works with, not in place of, your safe and careful driving. Do remember that none of the above listed systems creates extra physical grip between your car and the road. This is a fact, and is not debatable. All systems above maximize the use of available traction. They don’t create more.

Be under the assumption that your AWD system or ABS brakes make your vehicle stick to the road better. Don’t convince yourself that with these systems on board, or in a heavy enough vehicle, that winter tires won’t still make a massive improvement. However your ride is equipped, it’s still got four little tire patches touching the road. Remembering this will help keep you out of an accident, and on the road.

PRO TIP: You’re going to skid, so be prepared for a skid!

Practice skids. Find a large, empty, isolated parking lot, after the lights go off. Or on an empty road where appropriate, and when nobody’s looking. If you’re a young driver, ask your dad to take you out skidding. He will say yes. Every skid you do for practice makes you more confident and successful when it comes to handling the real thing. Want a fun weekend activity? Look into an advanced winter driving course. They’re a load of fun, and could save your life. In a real skid, keep your eyes and the steering pointed where you want to go, and be gentle with all controls.

Go Hollywood at the wheel if you’re skidding, trash the brakes, or ask your passengers if you should steer into or out of the skid as it’s happening. Being prepared to handle dangerous skids before they happen is vital to making the smooth and natural inputs you need to correct a misbehaving vehicle with limited traction. Conversely, aggressive steering or braking instantly washes out available traction and often makes the skid worse. Don’t forget: skids are the driver’s fault, not the car’s fault, and not the road’s fault. That’s because cars don’t skid out by themselves, and roads don’t make cars skid. A car is just a machine that does what the driver tells it to. If a car skids out, it’s because the driver did something wrong.