The weird and wonderful world of food trucks.
Advertisement

The weird and wonderful world of food trucks.

We love trucks. Big trucks, small trucks, work trucks and play trucks, there is a place and a purpose for each and every one of them. However, there might be no higher calling for a truck than to bring that most essential of basic human needs: love? What? No. Food!

Trucks have been bringing food to the masses since, well, I don’t know when, but that’s not why we’re here. Forget history, we were wondering which bold chefs went above and beyond the simple, utilitarian food truck and brought character, comedy and quirkiness to the food truck experience, so without further ado, here are our favourite food trucks from around the world. 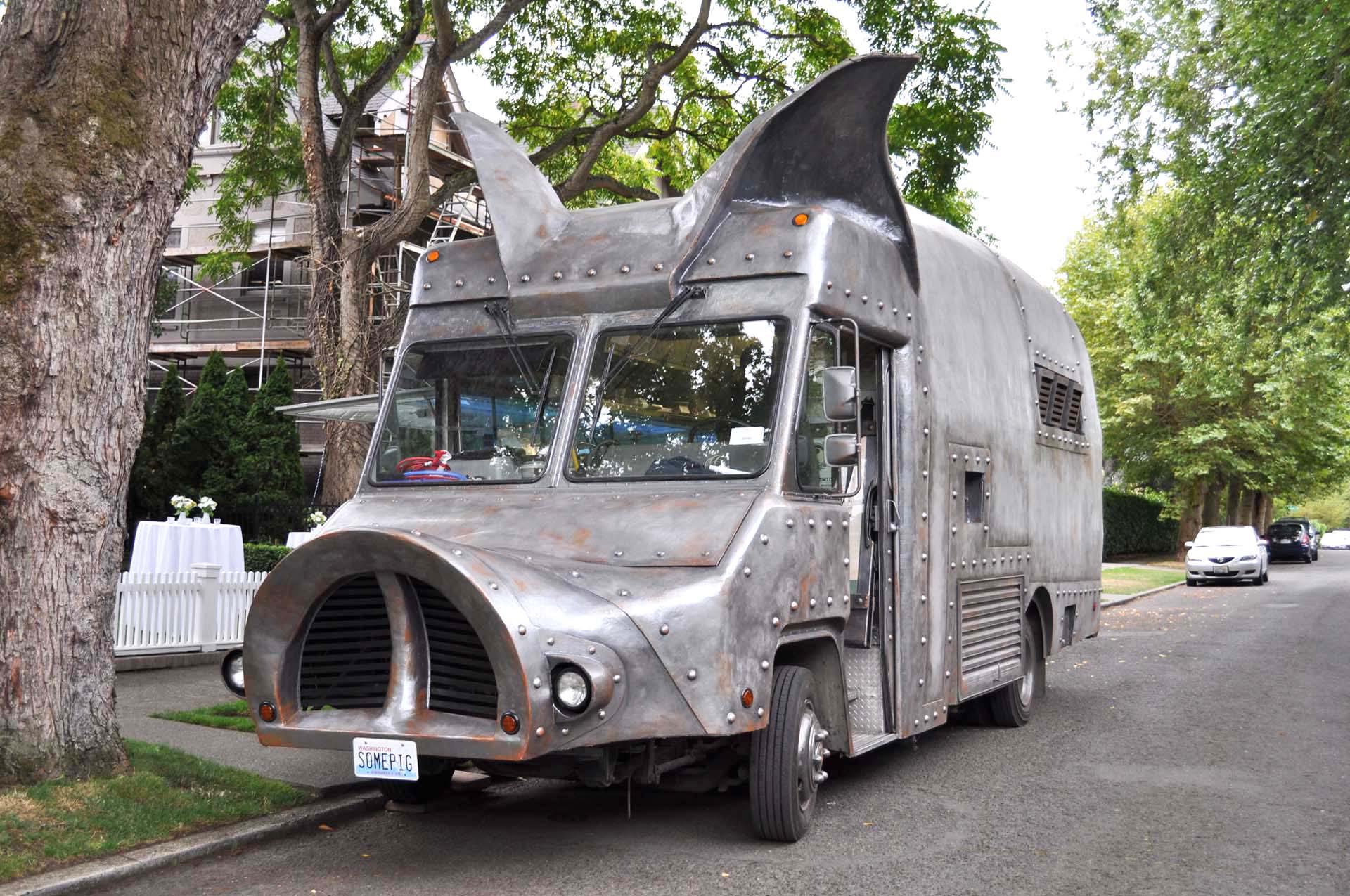 Okay, let’s start with a guy who went whole hog to bring delicious porky treats to the streets of Seattle, a hotbed of travelling culinary attractions. As you’d expect, the main attraction, after the pointy-eared, Mad Maxified oinker on wheels (with the oh-so-aproppriate SOMEPIG license plate) is porky goodness in the form of pulled pork sandwiches. 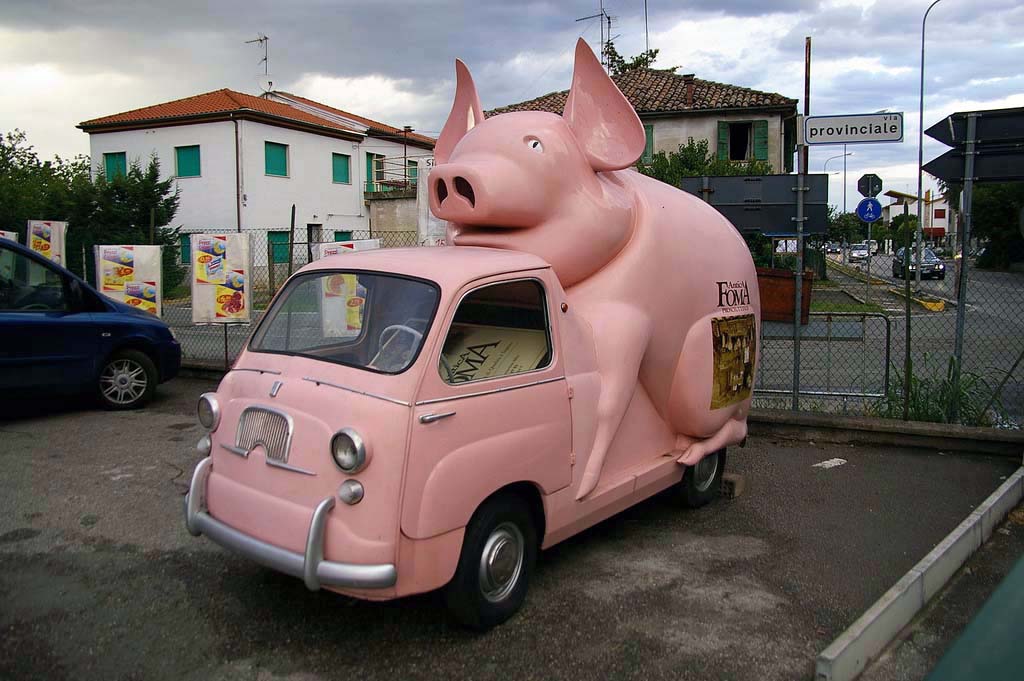 While we’re on the pig bandwagon, here is our runner-up in the pig truck category, though this one was simply a Fiat Multipla converted to advertising vehicle to promote chicken. Just kidding, it was to promote ham, or perhaps for an animal feed company. But really, who cares, what is that pig doing to the poor vehicle? 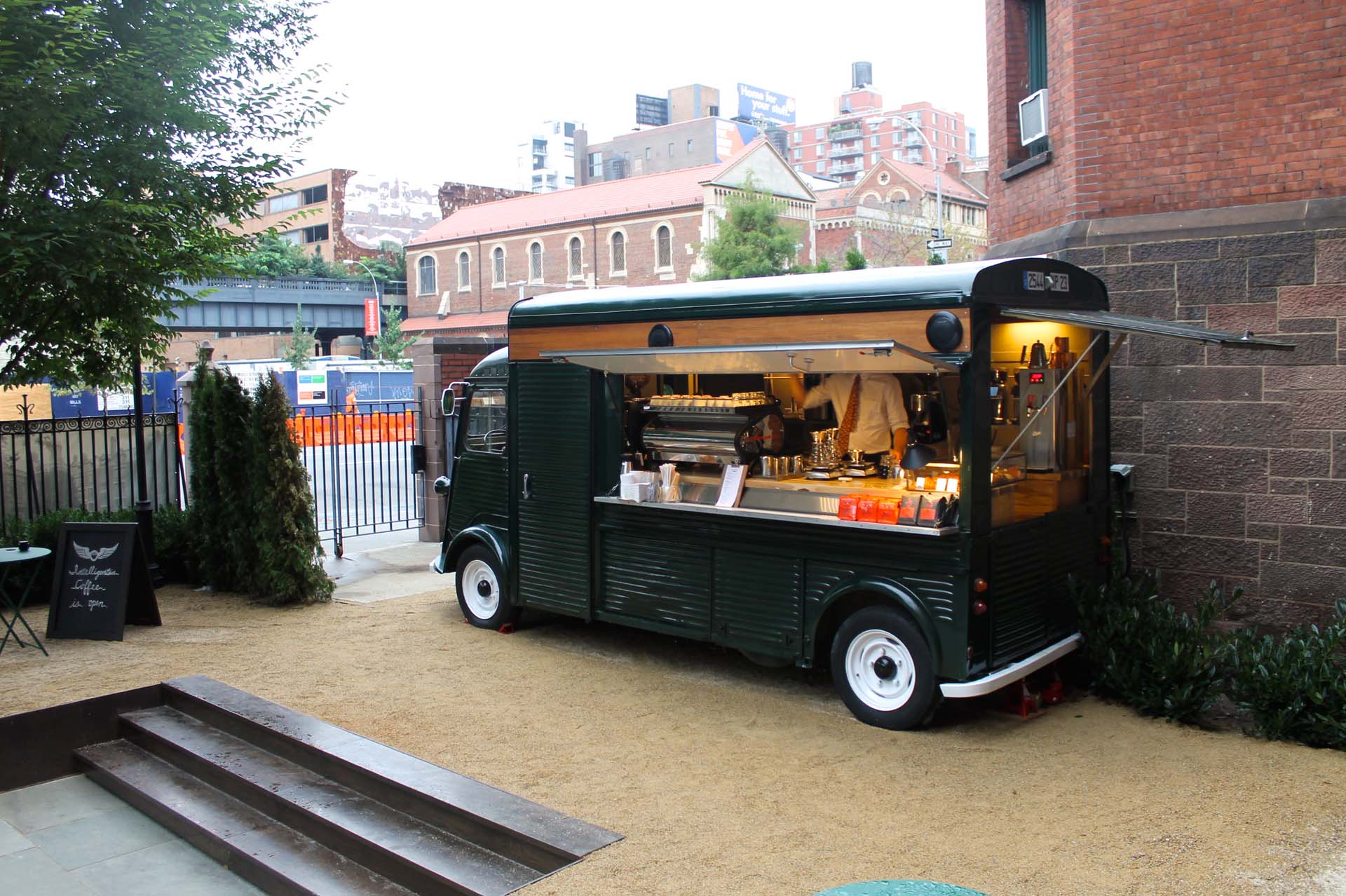 While not as crazy as a giant, pig-shaped truck, Intelligentsia scores big points for fitting into its environment, hip, trendy downtown Manhattan, serving up coffee just outside the swank High Line Hotel at the corner of 10th Ave and 20th St. Starting with a 1967 Citroen HY Van, its designers retrofitted the interior to house a full barista bar and service counter. And painted it black, of course. 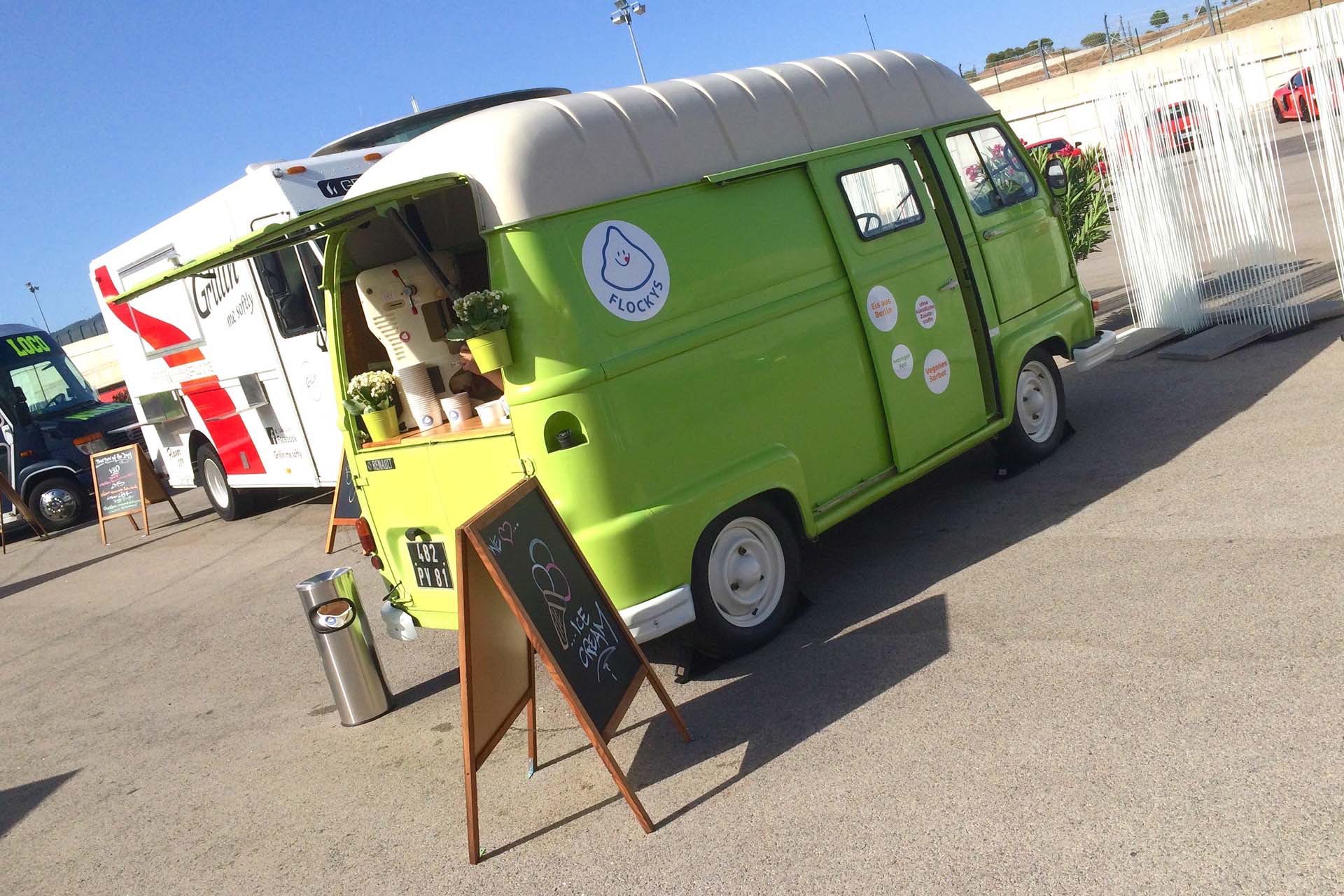 Also in the converted French truck category, this flavoured shaved-ice vendor truck manages to make it work in the small confines of this old Renault Estafette delivery trucklet, making the most of the small space. I got a chance to sample the treats from this one myself, refreshing us trackside at the launch of the 2017 Audi R8 in Portimao, Portugal. And because we have a fetish for converted old Euro-delivery trucks, this vintage VW Bus gets treated to a slick paint job with one of our favourite racing liveries (Gulf blue and orange) while serving delectable Banh Mi sandwiches and other Vietnamese delicacies in Quezon City, Philippines. Also in the Philippines, we find this far more modern food truck in Manila, serving up Mexican-Filipino fusion cuisine. It isn’t flashy, but it is sleek and stylish, a fine way to attract sidewalk strollers to grab a bite of our favourite Mexican dip. The truck isn’t just sleek on the outside either, the interior looks like a model home in a new condo development. Also taking the classy and minimalist avenue is the Del Popolo pizza truck, which is clean and modern, while serving up fresh-baked pizza from a brick oven that dominates its kitchen like a centrepiece in an art gallery. Del Popolo’s pizza truck is also unique in that its kitchen revolved around John Darsky's imported brick oven, which he wanted to take on the road, so he fitted it into a shipping container rather than a delivery truck, and it makes its rounds in San Francisco on the back of a Freightliner heavy commercial truck. Farther south in California, but at much higher elevation, we found one crew that would go to any extremes to bring hungry skiers a burrito on the half-pipe. To serve the skiers’ appetites for tasty tacos on the slopes of Mammoth Mountain, California, these enterprising and adventurous chefs adapted a Sno-Cat to bring the heat and flavours of Mexican right to the top of the mountain. This Washington DC Food truck brings the tastes of Hawaii to the US capital, but we love it for its tribute to surfing culture and the good old-fashioned woody wagon, perfectly capturing the spirit of automotive Aloha. Under The Crust Classic Ford F-100

We also love us some vintage pickups, and this pie truck, Under the Crust, takes one of our favourites, a second-generation Ford F-Series (we think it’s a ’55 F-100…) and sets up a simple, classy display for some tasty pies atop its truck bed. This food truck is just out of this world. That was horrible. A truly awful cliché. But c’mon, cut me some slack, when will I ever get to use a line like that again? Anyhow, this Space Shuttle Café is actually based on a converted airplane. It was originally a Douglas DC3 that actually saw military service during WWII, served many years as a commercial airliner, was converted to a camper on wheels (on a GMC bus frame), then remodeled in the image of the NASA Space Shuttle, and then retrofitted with a commercial kitchen in its final incarnation as the Space Shuttle Café. While not a food truck per se, this promotional bus for Westport Flea Market Bar & Grill is delicious. Created by master promotional vehicle artist Matt Targon, who had always dreamed of creating a burger car, the beefy, cheesy vehicle based on a Chevrolet S10 pickup roams the streets of Kansas City getting the name of this tasty burger joints out and about. Okay, this isn’t a food truck, it’s just a banana car. Awesome, right? It started life as a Ford F-150, before being converted into The Big Banana Car by self-proclaimed "most ridiculous man in the world" and art car fabricator Steve Brathwaite. I wonder if it has a Ludicrous Mode? And of course, the Oscar Meyer Weinermobile. Originally created by Carl Mayer in 1936, there have been several generations since, and this one is a 1952 model usually on display at the Henry Ford Museum in Dearborn, Michigan. The Wienermobile criss-crosses North America promoting Oscar Mayer products, their hot dogs chief among them, and whose adventures you can follow on Instagram.