Article by Jacob Black. Lead photo by Peter Bleakney, infographic by Valerie Mattocks. It’s an industry that employs more than half a...
Advertisement

Article by Jacob Black. Lead photo by Peter Bleakney, infographic by Valerie Mattocks. It’s an industry that employs more than half a...

Article by Jacob Black. Lead photo by Peter Bleakney, infographic by Valerie Mattocks.
It’s an industry that employs more than half a million people with about a quarter of those employed directly. There is a significant population employed in downstream supply and there are entire towns that rely on the presence of automotive manufacturing to keep afloat.

Yet, the automotive industry in Canada is on rocky ground. There are many who fear Canada could be the next Australia – which will lose its final automotive factory in 2017 when Ford, GM and Toyota all wrap up production.

Here in Canada General Motors’ Oshawa plant has already seen reductions in production and recently lost the job of building the Camaro – one of the General’s halo cars. That blow was demoralizing on an emotional level but it was perhaps the loss of pickup truck production at the campus that impacted the community hardest with the loss of jobs. And though GM’s Ingersoll plant retained production of the high-volume Equinox, Oshawa is feeling the pressure.

Toyota produces the RAV4, Corolla and Lexus RX in Canada at the moment but will shift Corolla production to Mexico in 2016. Corolla production in Cambridge will be replaced with larger cars but those will surely have less build volumes than the highly popular Corolla.

Fiat Chrysler Automotive is also looking like cutting minivan and Ram Cargo Van production from the Windsor plant after failing to secure government incentives to retool the facility. FCA will continue to build the Dodge Charger, Dodge Challenger and Chrysler 300 at the Brampton plant.

Since 2009 alone 145 automotive supplier plants in Canada have closed and 41 have opened leaving a net loss of 104 plants. Nine new car building plants have been added in North America, most of which were in Mexico, none in Canada.

This, at a time when automotive sales are through the roof.

China got $12.7B in 2014, with Mexico and the USA, Canada’s biggest competitors scoring $4.2 and $9.3 each. In 2015, the USA and Mexico are both securing large investments and adding more jobs than Canada is.

The gap is set to get wider, despite Honda committing $857M to its Alliston, Ontario plant, GM spending $560M to shore up 3,000 jobs at Ingersoll and Ford adding 400 jobs at Oakville. 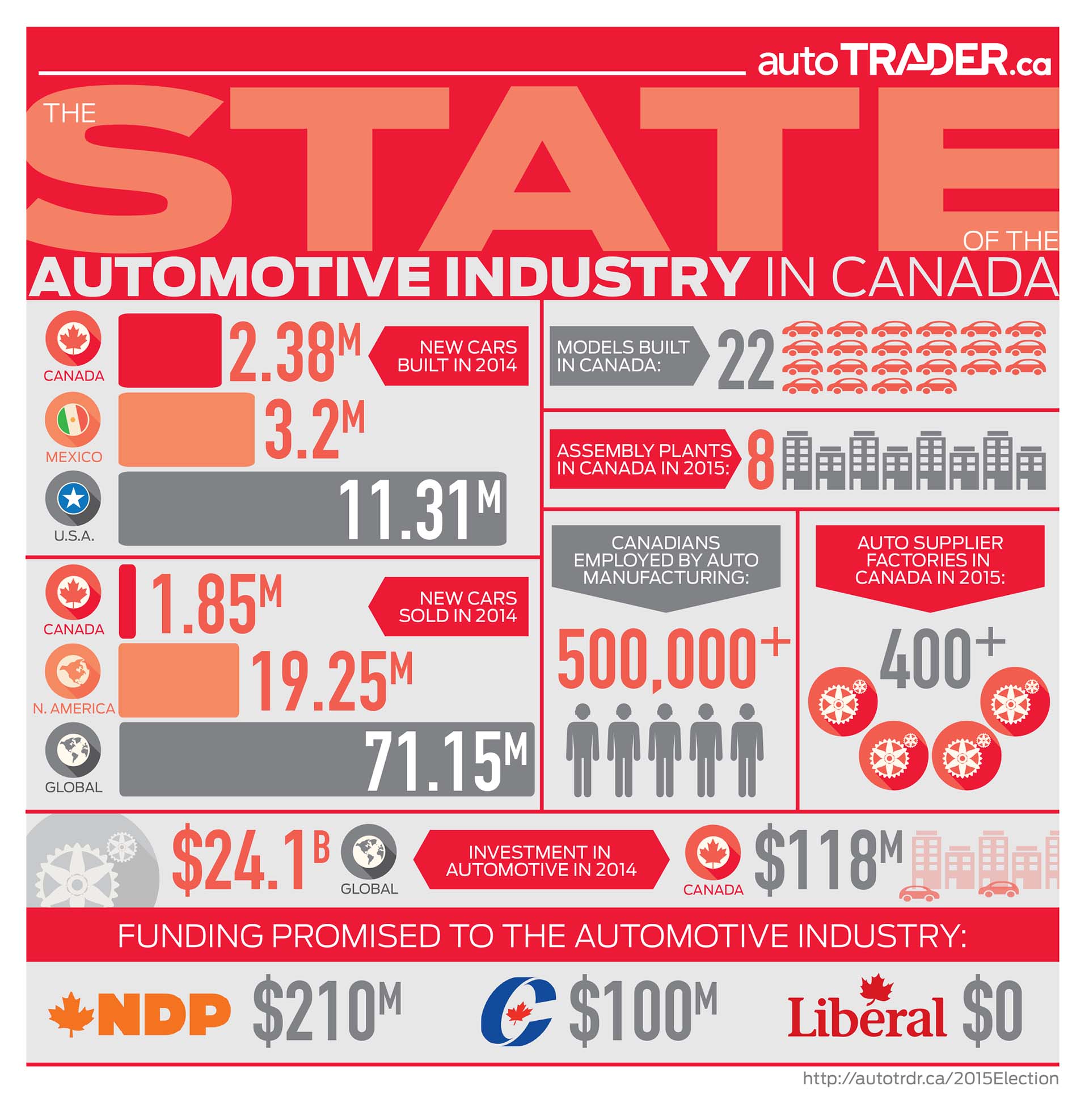 NDP leader Tom Mulcair’s unveiling of his party’s automotive platform this month put the issue of automotive jobs squarely in the spotlight, but has the manufacturing ship sailed for Canada?

The Automotive Policy Research Centre (APRC) at McMaster University highlights the shift in production to countries like Mexico as a key challenge for Canadian manufacturers. Mexico has more advantageous trade agreements, lower wage costs and lower taxes than Canada.

The APRC also identifies two trends in the sector that could give Canada an opportunity to redefine its role and cement jobs and industry here. Those two trends are the pursuit of lower vehicle emissions in efforts to reduce air pollution and the emergence of the vehicle as a hub of connectivity. In short, the growth of advanced technology is an opportunity for Canada to flex its muscles as a nation with a well-educated, highly skilled, and innovative workforce.

With a federal election looming and in the wake of the NDP’s policy unveiling we decided to drill down and get to the bones of what the big three are offering and what direction they see the industry moving.

Tom Mulcair promises to protect the existing regional content rules during trade negotiations, propping up a valuable safety net for the industry.

The NDP will also immediately re-fund the University of Windsor’s Auto21 Network of Centres of Excellence. That program is currently in its final year of funding, and a renewal would see it continue to coordinate research into everything from child seats to manufacturing techniques and anti-theft systems.

Mulcair also promises to set up a one-stop shop for investors called ICanada. This would allow auto investors to access a new government service that helps connect them with the various government programs and financial incentives available.

The centrepiece of the NDP policy though is a $90-million boost in funding to the Federal Automotive Supplier Innovation Program. The fund, to which the Conservatives pledged $100M in April, will get the extra $90M over five years.

In addition, the NDP will remove the taxation claimed by CRA on loans paid out from the fund, saving $20M for investors. The tax was claimed payable as loans made under the scheme were considered income by the revenue agency, which would change under an NDP government.

“I will be a champion for the auto sector and will work closely with automakers and provinces to attract investment in automobile assembly and parts manufacturing,” said party leader Tom Mulcair.

“With a reliable partner in an NDP government, I believe the best days are ahead for Canada’s automakers – together we can kick-start manufacturing.”

The NDP plan has strong support from Unifor and the United Steel Workers.

It’s all about going green over in Justin Trudeau’s camp. While they haven’t yet unveiled a specific automotive or manufacturing policy, the Liberals have their own automotive caucus to focus on the issue and has earmarked “clean” technology as an area of focus for any future Liberal Government.

“We understand that manufacturing is the number one investor in research and development. We will help manufacturers to modernize and reach new markets,” the Party said in a statement to autoTRADER.ca.

“As a start, we believe Canada can be the world’s most competitive tax jurisdiction for investments in the research, development, and manufacturing of clean technology. We will consult on ways to enhance the scientific research and experimental development tax credit – in conjunction with other tax measures – to generate more clean technology investment.

“Moreover, we will invest $100 million more per year in organizations that have been successful at supporting the emergence of clean technology firms in Canada and work in partnership with the private sector to enhance the availability of venture capital for new, clean technology.”

These commitments are indicative of a Liberal Party focus that moves away from traditional manufacturing and moves towards the new style of automotive market. But, the Liberals have also committed $60 billion in infrastructure funding. They say the New Building Canada Fund will “prioritize investments in roads, bridges, transportation corridors, ports, and border gateways” – this spending on infrastructure is how the Liberals plan to attract more investment into Canada and by extension, the automotive sector.

The commitment to assist research in clean technology aligns with the APRC’s recognition of current trends in the automotive sector and the ongoing push for cleaner technology and lower vehicle emissions.

The Conservative Party opted to bail out Chrysler and GM after the 2008 Global Financial Crisis (GFC), and in April pledged $100 million to the Federal Automotive Supplier Innovation Program. That money in part came out of the Automotive Innovation Fund which has been under-utilized.

The Conservative Party has been criticized for the decline in manufacturing jobs in Canada over the past 10 years, but points out that it also saved the Windsor, Brampton, Oshawa and Ingersoll plants from certain death at the peak of the GFC with the GM and Chrysler bailouts. The shares in GM were sold this year at an estimated loss of $3.5 billion.

Manufacturing jobs in Canada have fallen by 5,500 since 2010 with the heaviest losses felt in Windsor.

Having said that, the industry has seen a boost in investment in 2015, with Ford, GM and Honda all announcing new projects. Ford added 400 jobs at Oakville for the Ford Edge, GM will spend $560M on its Ingersoll plant which currently employs 3,000 people and Honda will spend $857M on the plant at Alliston.

Just two weeks ago, in Windsor, Stephen Harper announced a new, five-year, $100M Manufacturing Technology Demonstration Fund. This would provide grants instead of loans to fund research into new manufacturing products and technology across a range of manufacturing sectors, including automotive.

Similar to the NDP, the Conservative Party would also form a new office within the PMO which would focus on attracting new investors, businesses and export partners to Canada.

This would remove much of the red tape which manufacturers say is hurting their ability to access programs like the Automotive Innovation Fund which had over half-a-million dollars of unused money left over in 2014.

While the TPP is far broader than just automotive manufacturing its far-reaching consequences could impact the industry. There are 12 countries in the TPP, the USA, Japan, Canada, Australia, Mexico, Malaysia, Singapore, Chile, Peru, New Zealand, Vietnam and Brunei.

Theoretically the TPP will open up trade in goods, services and agriculture more than any agreement prior. This on one hand opens up new markets and therefore more demand for Canadian goods but on the other could make Canada more vulnerable to price-competition for goods and services. It will almost certainly reduce the amount of protection the government can provide local industries through tax policies and local content rules.

On the pro side, the Conservative Party is as we speak working to secure Canada’s position in the new Trans Pacific Partnership. Stephen Harper says the TPP is essential for Canada and that it will open foreign export markets for Canadian suppliers, including Canadian automotive parts suppliers. It also reduces the reliance on exports to America at a time when American economic influence is waning.

The NDP is concerned about the impact the TPP will have on agriculture in particular and farmers make up a large base of the party.

The NDP is also concerned the TPP will impact “local content” restrictions. Currently vehicles sold in North America must have 62.5 percent locally-made parts in order to escape duties. Individual auto parts needed to have 60 percent local content. The TPP would reduce that to 45 percent and widen the "local" region to include all 12 TPP countries. The secretive nature of the negotiations means we don’t know exactly what’s on the table beyond that - yet.

Currently, it looks like the NDP would not sign Canada up to the TPP in order to protect local content rules and protect the Canadian auto sector from competition as well as protect supply management – the systems that help control the price of poultry and dairy products in Canada.

Update: The TPP was signed on Friday, October 5. Full details of the agreement won't be available for some time but you can expect this to take on a deeper significance to the election race.

The NDP platform is very much focused on supporting the existing jobs in manufacturing by boosting the available incentives to investment. They will attract new investors by making it easier for them to liaise with the government and access programs.

The Liberal Party platform is focused on shifting to a new kind of manufacturing economy and is particularly focused on clean/green technology.

The Conservative policy is in some ways a middle ground, with a more modest injection of incentives than the NDP but also a focus on innovation and research funding.

Which platform makes the most sense to you? Let us know in the comments below.