The museums of the world are filled with a hundred thousand everyday objects. Whether it's a carefully chipped obsidian axehead or the worn wood handle of a medieval ploughshare, man-made objects can become art merely by surviving, by acquiring the stories of those who use them. A Monet, an ancient tapestry – these you expect to be preserved. The tools we use in ordinary life tend to get used up. When one lasts, it becomes something very special.

This little bronzed baby shoe is one such artifact, a 1977 Honda Civic with a two-speed Hondamatic transmission. It's an economy car, a device intended to get people from A to B without costing them much in the way of $. It doesn't have much in the way of horsepower. It is modest in both curb weight and carrying capacity. Its needs are few. It's a jewel.

Truth be told, the dreams of Soichiro Honda himself were far greater than this humble little runabout. For Dr. Honda, a proper car would be crammed with unique innovations and genuine sporting prowess. His dedication to that ideal nearly broke the company. 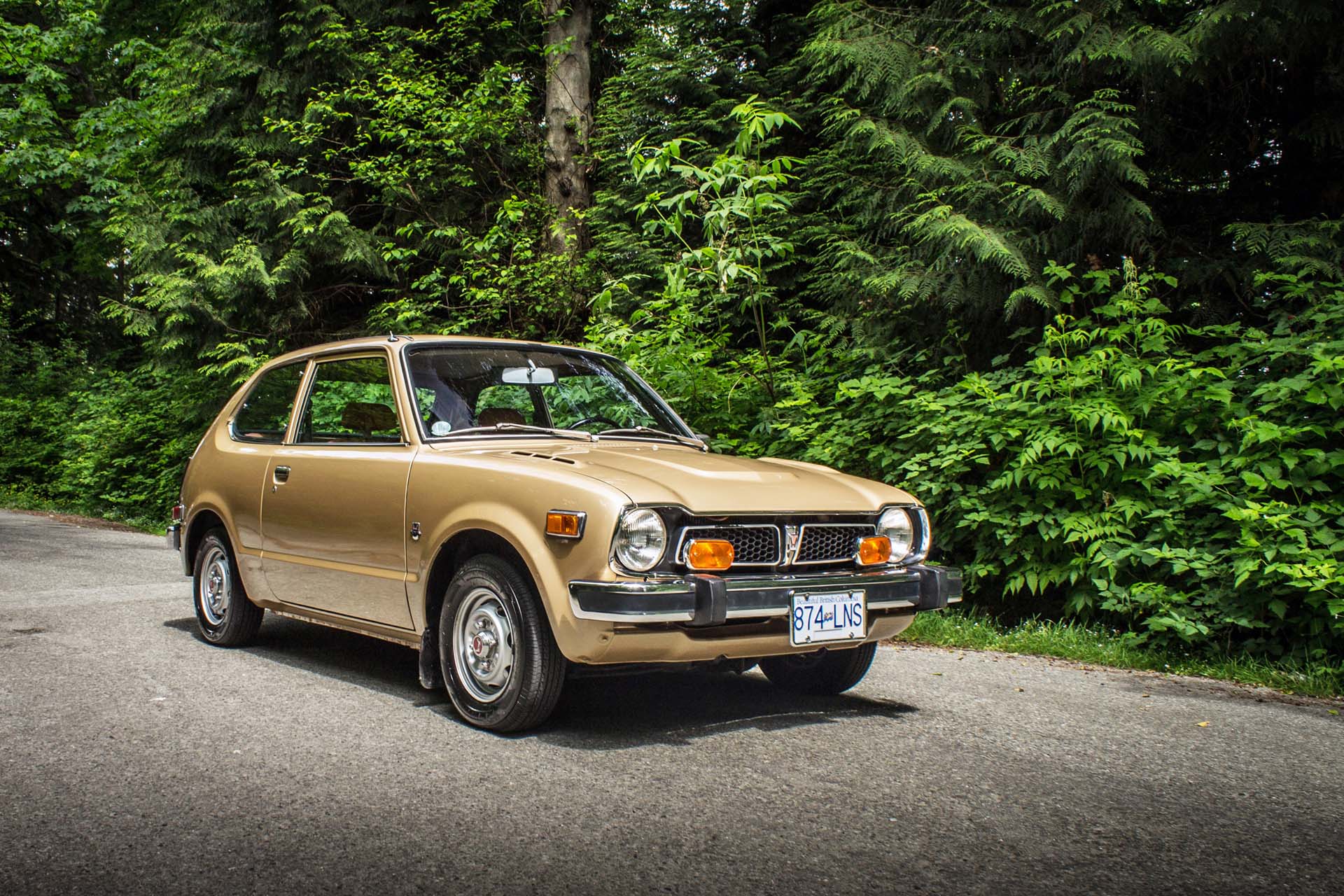 However, the young engineers he attracted to his fledgling brand came up with something perhaps not revolutionary, but extremely successful. Taking the same recipe used to create the tiny N600 microcar, they expanded the footprint, increased the engine power, but kept things relatively simple. Horsepower was around 50 hp from a 1.1L transversely mounted four-cylinder engine, a four-speed manual was standard, and the car came equipped with independent suspension at all four corners.

Very roughly speaking, the Honda Civic could be considered a Japanese interpretation of the original Austin Mini. It was reliable, it scooted quicker than you'd expect, and the fuel economy was excellent. Introduced right at the same time that the first of the fuel crises of the 1970s hit, the Civic would be an instant hit.

And yet, despite their popularity, the original Civic is a very rare object today. Part of the issue is their tendency to rust: outside of the temperate coastal regions, many of these little cars have disintegrated and blown away in the wind.

The other issue is with value. At some point, like any other people-mover, an old Honda Civic was just an old cheap car. Keeping one maintained is one thing, but attempting a restoration would be madness. As soon as a major issue reared its head, it was the scrapyard for many of these early little Japanese immigrants.

But not this one. A slightly later model – and not a CVCC, notably – this '77 machine has a lofty 52 hp thanks to its larger 1.2L displacement. It is old, and it is well-loved, and in places it is worn. However, just like those museum artifacts, it is a treasure. 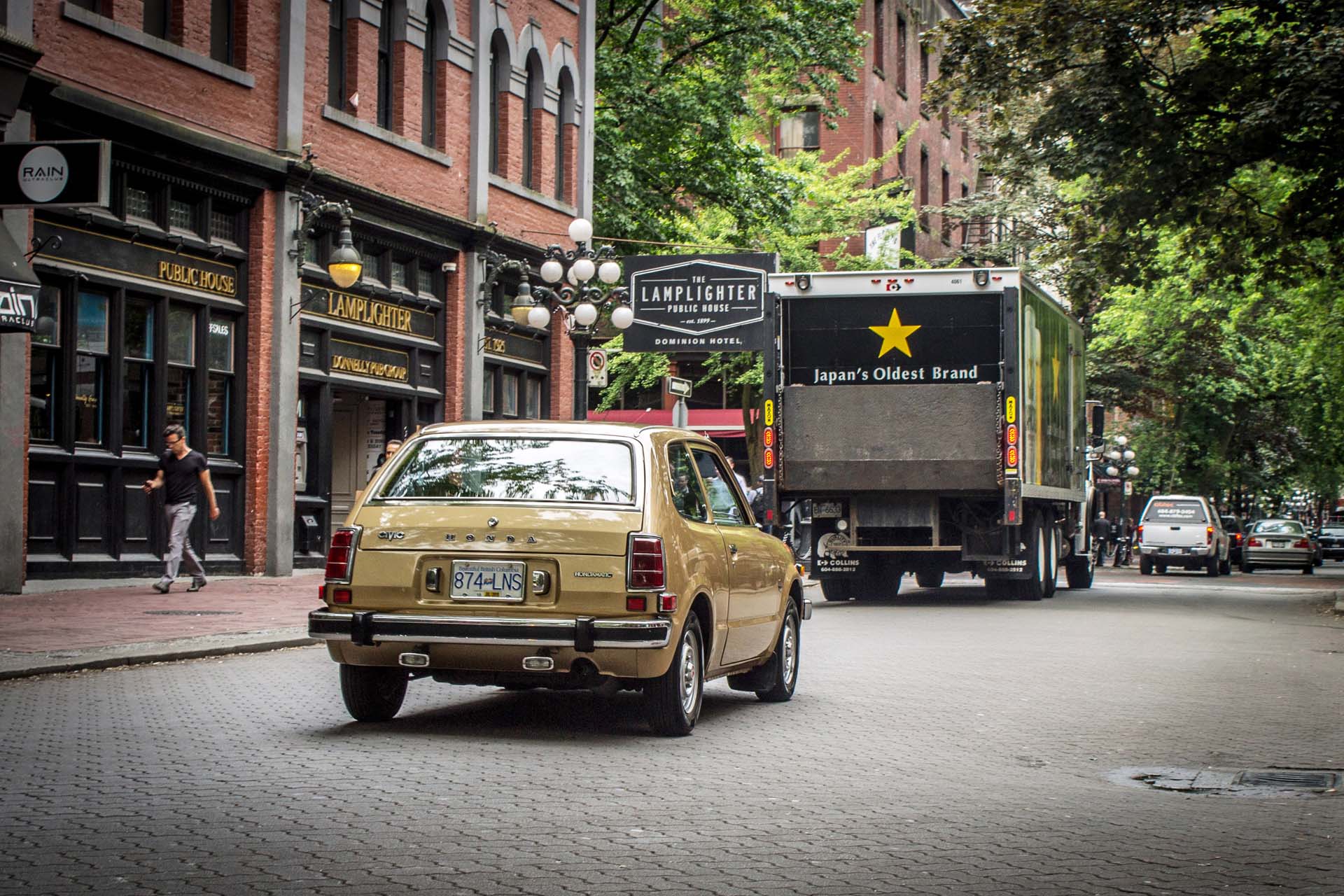 Judging by some old rear dealer badging, this one was sold out of a dealership in North Vancouver, and has remained in the Lower Mainland for much of its life. The odometer reads just 87,000 km, and there's not a spot of rust to be found. Its current caretaker is Hiroko Marunaka, herself a Japanese import, and she has dubbed it Kinjiro, meaning second golden boy. Before this, in Japan, she had a pristine Toyota Hilux from the 1980s.

The Japanese aren't much given to automotive nostalgia, generally. Taxes on older cars in Japan are very high, and the collector and classic market is mostly left up to the big dollar items. However, at this year's Vancouver Supercar Show, Kinjiro found himself sliding into position alongside Lamborghinis, Ferraris, classic Ford Thunderbirds, and even a very rare Toyota 2000GT.

“I was overwhelmed to see vintage cars so well cared for,” Hiroko says of her experience. “Especially very early cars from the 1930s and older – these are not often seen in Japan.”

On any given sunny day in Vancouver, you could stand on a curb downtown and hurl a rock knowing that you might hit an Aston Martin but not before it'd have bounced off two Porsches, a Mercedes, and possibly a Ferrari. The upper echelons of supercardom aren't slightly less common, but still in full attendance: I remember reading once that 6 of the first batch of 20 Porsche Carrera GTs ended up in Vancouver.

Even so, Kinjiro has all the high horsepower stuff beat, hands down. On a warm, bright day, his gold-brown paint sparkles in the sunshine, and people stop to point and stare. A bright orange Aston Martin V12 Vantage rolls the other way, as obnoxious as a spray tan. No one even looks; the lowly Civic is getting all the glory. 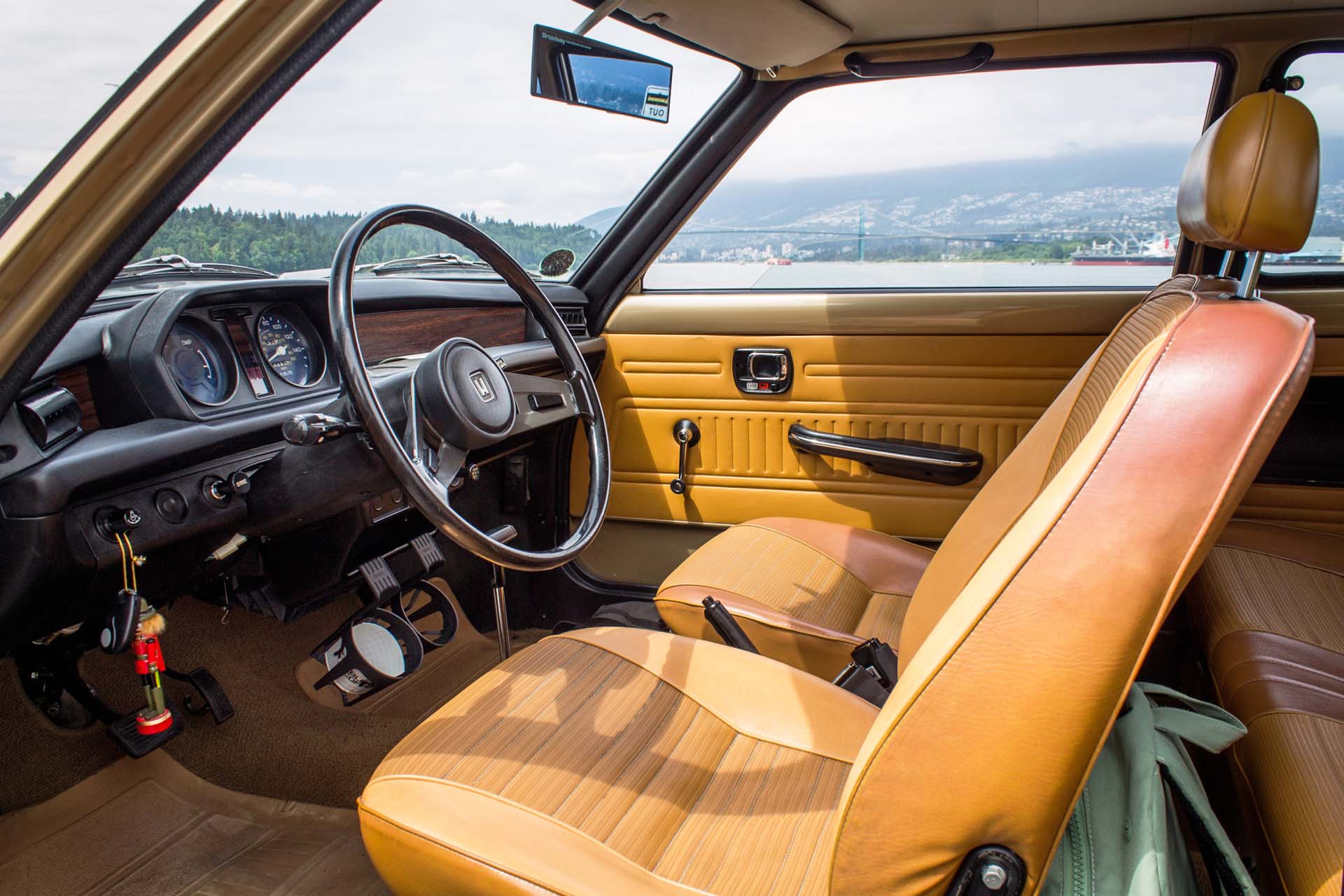 Behind the wheel I accelerate gently off the line (as if I have any choice) and then upshift to second with the console shifter. All around is butterscotch-coloured cloth and vinyl. It's a bit like being inside a Werther's original.

It's just as sweet to drive, too. Despite having the kind of power levels that might best be measured in Shetland Ponies, the Civic weighs no more than a hedgehog's sneeze. It's deeply unsafe, of course, but there's no time to think about that. You merely zip to and fro alongside the coursing leviathans with their big, showy, chrome-laden, status-conscious badgework. The more things change, the more they stay the same.

There are, I think, a couple of reasons for Kinjiro's hero status. First, he's just adorable, understated and understyled in a way you just don't see anymore.

Second, half the people who see this car are experiencing a memory. By 1977, the Civic had been on sale in Canada for 4 years, and today it's been the best-selling car in the country for the past seventeen years. That's a lot of first-time owners, hand-me-downs, college commuters, faithful beaters, and first tastes of freedom borrowed from the parents.

Odds are, most Canadians have a Civic story to tell, either of this generation or the half-dozen that followed it. It didn't just establish a beachhead in sales, we started regarding these little cars with the good times we had in them. They put their skinny tire marks on our hearts. 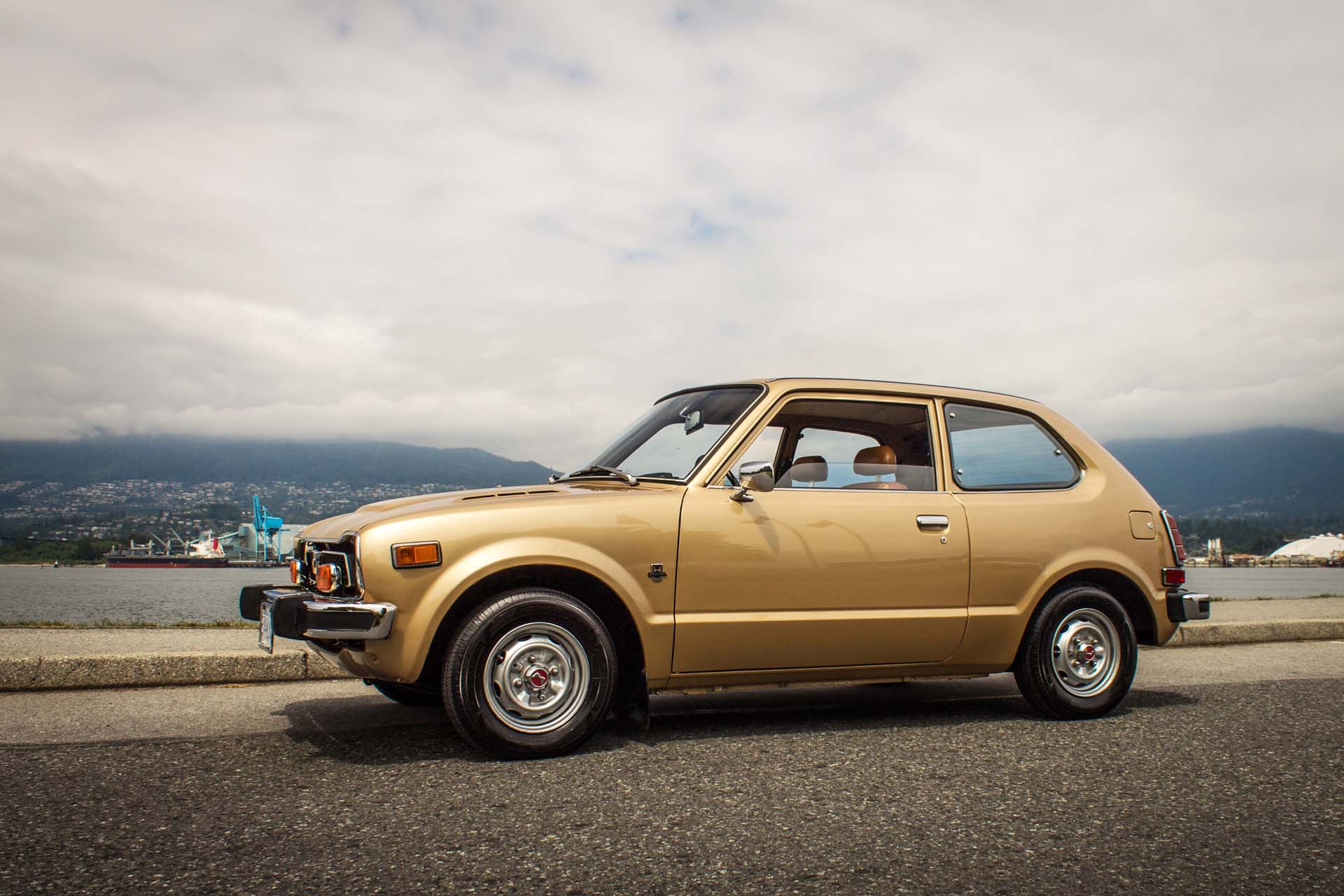 “I would hope the new owner would keep my car original,” Hiroko says. “Of course, everyone has their own preference, but I feel his original condition is what makes him special.”

Trained as a nurse, Marunaka is hoping to move to the Maritimes for work, specifically Nova Scotia. Fearing the salt air might be too much for her little Civic, she's going to be selling him.

You can find the ad on autoTRADER.ca here: 1977 Honda Civic. As an entry into the world of Japanese car collecting, you could hardly do better. This Civic is a time capsule, entirely original, and has a great history as a local machine. It also comes with extra parts, and is an easy-to-maintain way to put a classic in your garage.

Merely by surviving longer than any of his brethren, Kinjiro has earned himself a charmed life in retirement. Here's hoping his next curator has the same careful appreciation shown by Hiroko.

We are a tool-making species. We create things, and we use them up. As we move forward into a future where transportation is being transformed by complex engineering and big ideas, it will be good to look back on the beautiful simplicity of a vehicle like this, and remember. Once, this little Civic was commonplace and everyday. Now, it is something special.