This isn't a car, this is a fist-fight with scissor doors. It's a right cross in a brawl over ego, a punch inna you stupido face, Enzo. It's a pinup, a curse, a crimson-hued slash of the stiletto right at your retinas.

“Lambo!” shouts a guy passing by in a truck.

It's a Lamborghini. It's the Lamborghini. From the people who brought you the most beautiful car in the world (the Miura) comes the most shocking. In the 1970s, it was the thunderclap heard 'round the world, and even today the company struggles to rebottle that lightning strike of inspiration.

For all these reasons, the Countach has undergone something of a surge in value of late. Once, these were hundred-thousand dollar cars, cheaper than splurging out on a new Porsche 911. Makes sense: a Countach of this vintage isn't exactly a track-ready rocketship. Maintenance is no small concern, and exotic Italian machinery has never had a reputation for reliability. Hot-blooded, yes, but hot-tempered to boot. 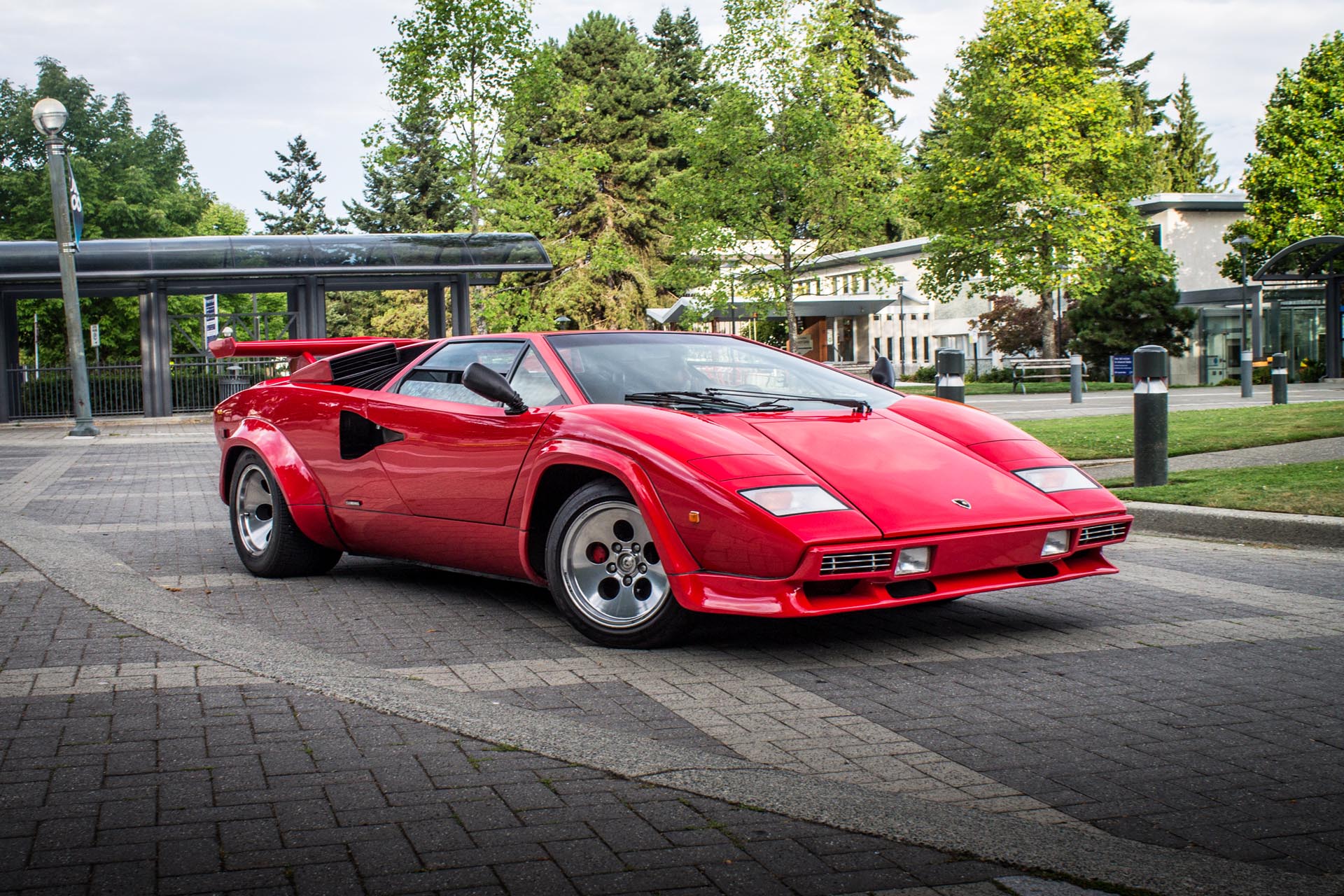 The reason such occasionally temperamental behaviour doesn't matter so much anymore is that the Countach increasingly stands alone as an example of something real, something money alone can't buy. Lamborghini now makes cars that are faster, more reliable, more capable – they're even coming out with a crossover at some point. They use more carbon-fibre these days, and more advanced engineering produces ever more speed. Still, I don't know if they're capable of building anything this astonishing again.

This one, which belongs to owner Jeff Dow, is a Euro-spec 1984 5000S. The “Euro-spec” bit entails several differences versus US market cars: it's got six Weber side-draft carburettors instead of fuel-injection, and the bodywork is cleaner, devoid of some of the aerodynamic add-on pieces  that would clutter the clean look of the car. Its 4.8L V-12 makes 370 hp – easily eclipsed some three decades later, but back in the day certainly enough to pin your ears back. Better than the power output are the theatrics that accompany it, that symphony of fire that is an Italian V-12.

Dow is not a collector. While his dream car has appreciated sharply, he was lucky enough to make his move when the market was still relatively flat; as an investment, he's done very well. However, like I said, he's not a collector, nor a speculator. Jeff bought this car to drive his dream.

During the summer, his Lamborghini comes out to multiple show and shines, and everywhere it turns up, it draws the eyeballs. Everyone knows this car: it's the Cannonball, the poster on the wall, the Miami Vice speed machine. It's not just a car, it's a symbol of an era. 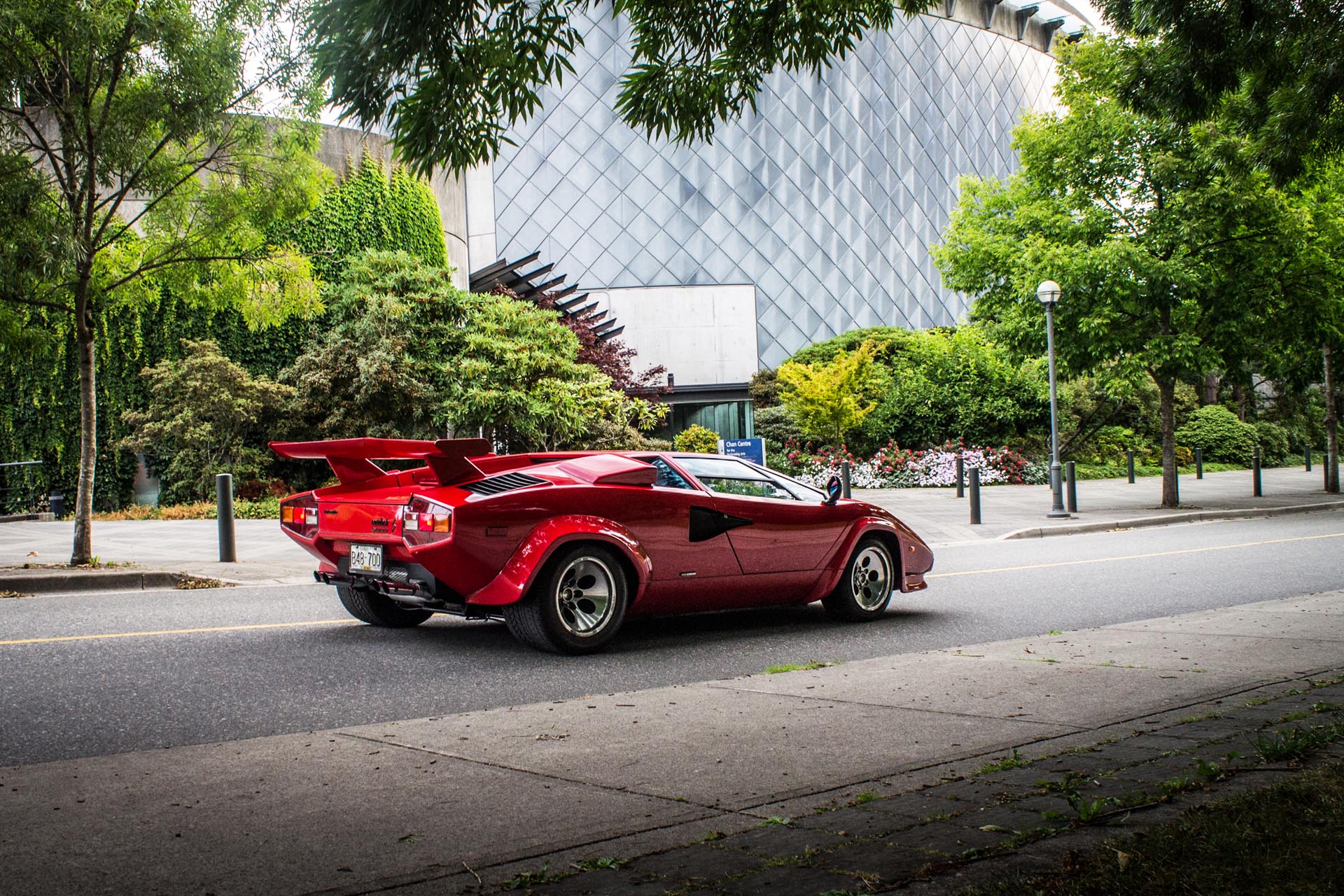 Lamborghini, as most gearheads know, got its start in the car business as the result of an argument between two wealthy and strong-tempered Italian gentleman. Ferrucio Lamborghini, tractor magnate, drove down to the Ferrari factory to complain about the quality of his 250GT, and about the quality of the service he was receiving. Enzo Ferrari, not known for having vast reserves of either patience or tact, told Signore Lamborghini to stick to his tractors.

Ferrucio wasn't merely a wealthy industrialist, but a pretty sharp gent where machinery was concerned. He campaigned a self-tuned Fiat Topolino in the 1948 running of the Mille Miglia (regrettably crashing it into a restaurant), and owned cars like the Mercedes-Benz 300SL and Jaguar E-type. Lamborghini loved speed and comfort, and it was the high-strung nature of Ferraris that so irked him. Stick to tractors? I'll show you.

The first Lamborghinis were genteel grand tourers, phenomenally powerful, yet also smooth. Then, a young designer named Marcello Gandini penned the flowing and beautiful lines of the Miura. Stunning in its curvy mid-engine finery, the Miura remains possibly the best-looking car ever made. As a follow-up, Gandini had his work cut out for him, but he was young and Italian and wasn't about to play by the rules.

As the story goes, Nuccio Bertone wandered into the studio one day to see what his young designer was up to, and saw the prototype Lamborghini LP500 revealed. “Countach!” he cried and the name stuck. As a result, while almost all other Lamborghinis are named after famous fighting bulls, the Countach has a rather profane name. Taken from the Piedmontese dialect, it may be taken to mean “splendid,” or “wonderful,” but the more earthy meaning is a cry of surprise akin to a wolf-whistle when seeing a pulchritudinous young lass. Let's put it this way: Nuccio's grandmother would have given him a clip 'round the ear if she'd heard him talking that way. 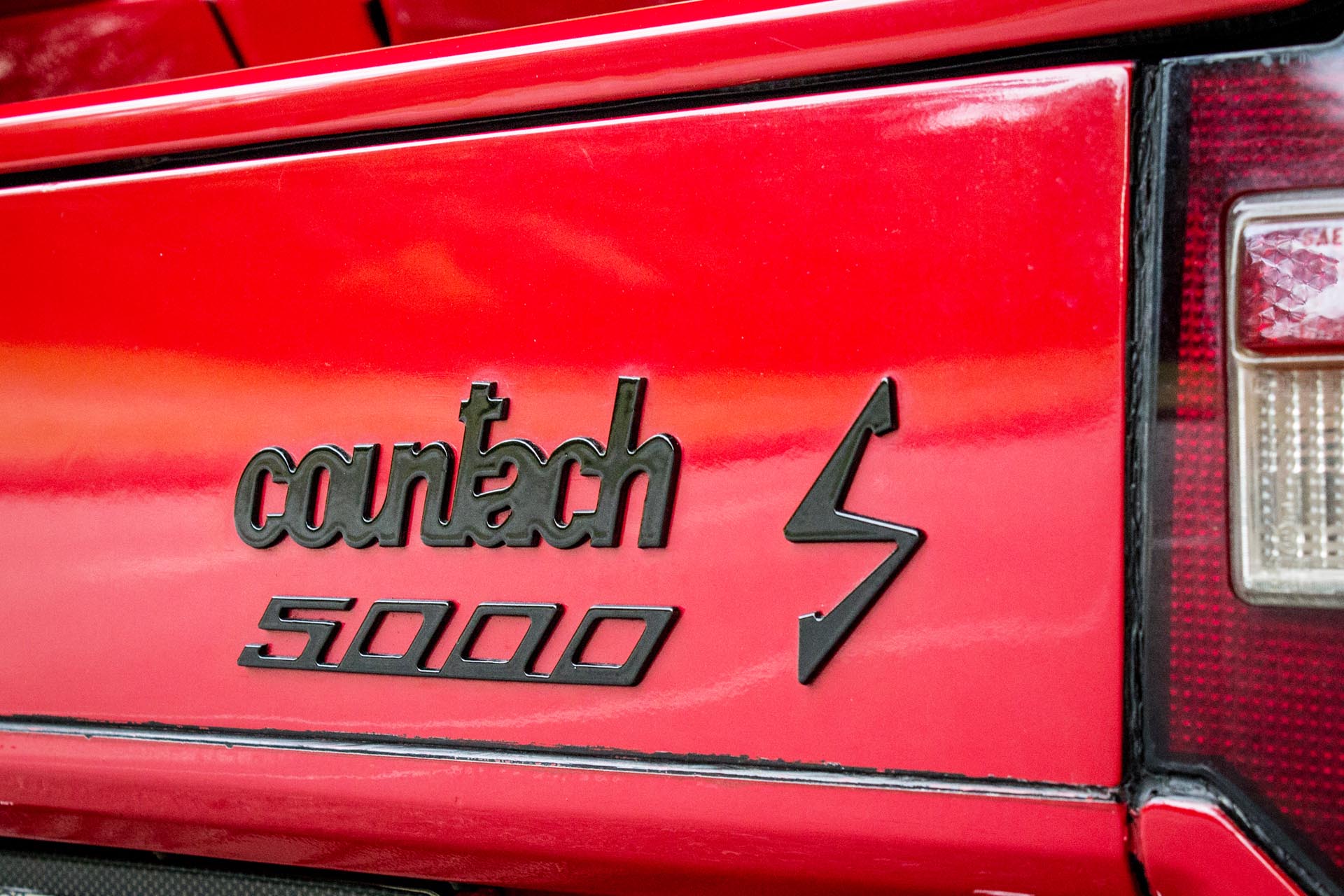 Still Countach it was, and Countach it would be – if the company survived. The 70s were a tough financial time for Lamborghini, and while the Miura had been a success, getting Gandini's dream from prototype to reality was somewhat complex. It was first unveiled to the public at the 1971 Geneva motor show, but didn't actually start production until 1974, and with a smaller 4.0L engine than the prototype had. The first Countach, the LP400, is considered the purest expression of Gandini's vision; it's a wonderful car.

As a Canadian, right about here's where the story gets interesting. Lamborghini just about went under in the 1970s, if not for the intervention of one Walter Wolf, an Austrian-Canadian oil baron. Walter's story is a real rags-to-riches affair: he came to Montreal with essentially nothing and began working as a diver on oil platforms. Within a few years, he had his own dive team, then oil interests, then suddenly he owned a Formula 1 team, won the Monaco Grand Prix, introduced Gilles Villeneuve to Enzo Ferrari, and even got Il Commentadore to part with a Ferrari 512BB on a handshake bet over the outcome of that Monaco race.

Wolf was a Lamborghini man, and owned dozens of them. He claims to have owned one of the last Miuras ever built, assembled from spares, and had a LM002 SUV (which he didn't really like). He also owned four Countachs, one after another, and each was amazing. 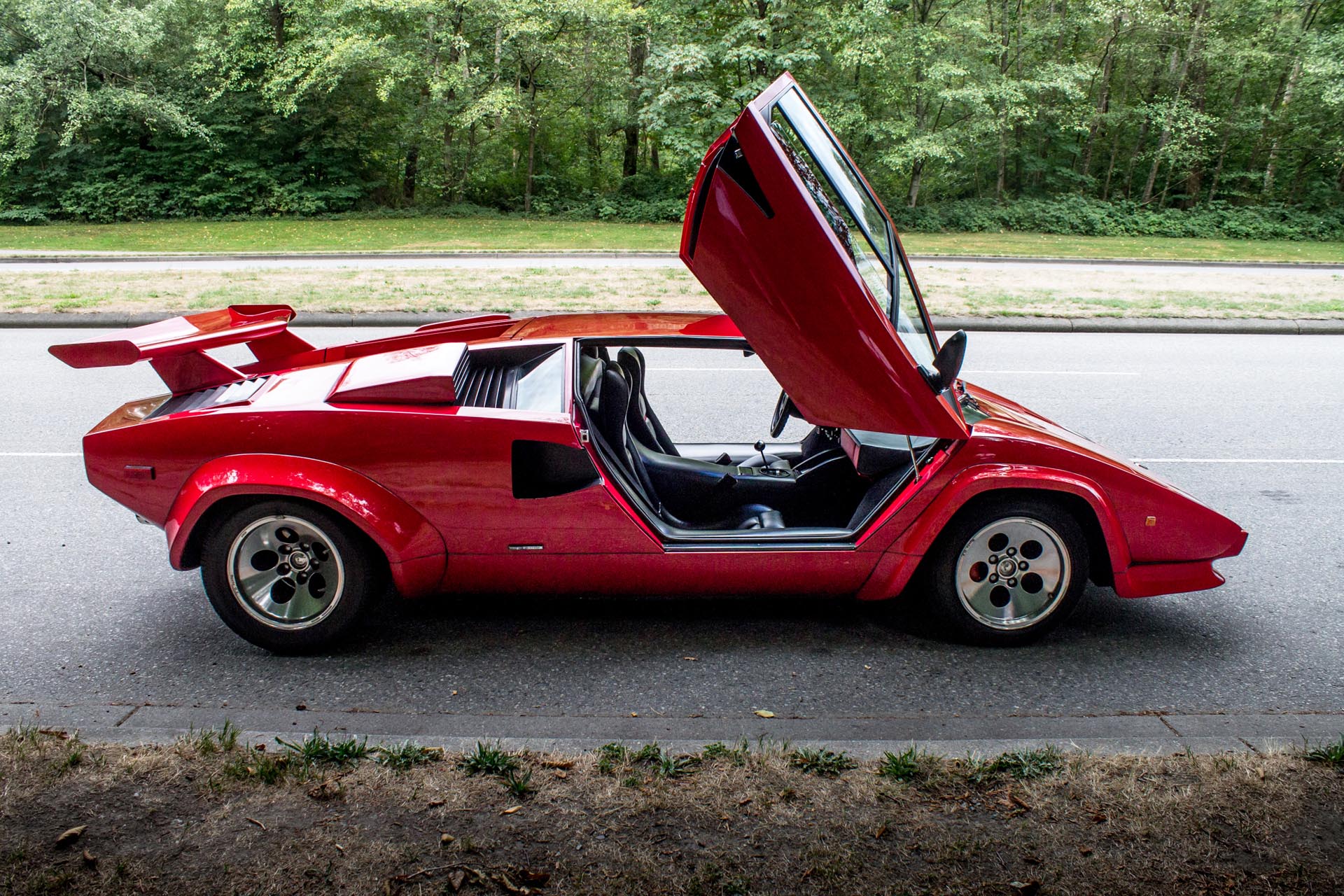 Again, audacity carries the day. The under-the-table cash infusions were enough to keep Lamborghini going, and they also served to move the Countach ahead, keeping it competitive with the Testarossa, Ferrari's side-straked mid-engine V12 retort.

The shape, the power, the speed. The Countach became an icon in the '70s and '80s, something that would remain a dream for so many. Over the course of fifteen years, just 2000 were made – a successful run, yes, but nothing like as many Aventadors as Sant'Agata was able to sell in just a few years.

For Jeff Dow, it was always going to be the Countach: “The true definition of the exotic car,” he calls it. There are those who try to point out that the emperor's clothes don't fit as well as they could, aren't practical for everyday use, are maybe a little bit flashy.

The Countach doesn't care about your petty concerns. It is a fighting bull, a menace and a force to be reckoned with. Anyone who complains about it not being a good car is missing the point. It doesn't need to be good. It's infused with greatness.