QUEBEC CITY—This motorcycle is one of the biggest in the world. It’s also one of the most expensive.
Advertisement

QUEBEC CITY—This motorcycle is one of the biggest in the world. It’s also one of the most expensive.

QUEBEC CITY—This motorcycle is one of the biggest in the world. It’s also one of the most expensive. Nobody would be happy if I piled it off a cliff into the Atlantic Ocean. Good thing it’s got traction control then – and I hunched forward and twisted the grip a little further on the bar.

There are larger and costlier bikes than the K1600 GTL: but not many. It’s the heaviest BMW on two wheels, weighing 348 kg after you’ve filled it with gas but before you swing a leg over the seat, and it will set you back more than $30,000 before taxes. That’s more than the price of a Mini, and you’ll still get wet when you ride it.

Not that wet, though. I know this because it rained yesterday and the fairing did a pretty good job keeping me dry when the bike was moving. The windshield raises and lowers at the touch of a handlebar button, something not offered on its closest competition, the Honda Gold Wing and Harley-Davidson UltraGlide. You can push it all the way up and it’s like riding behind a huge window, or all the way down and it tucks in almost like a sportbike.

That’s how it is now, wailing into this curve at the corner of the continent. I’m heading home on Quebec’s Hwy. 132, which is a French-Canadian version of the Cabot Trail. It loops right around the Gaspé Peninsula and it’s better than the Cabot Trail, if you ask me, because there’s more variety and it’s three times as long. 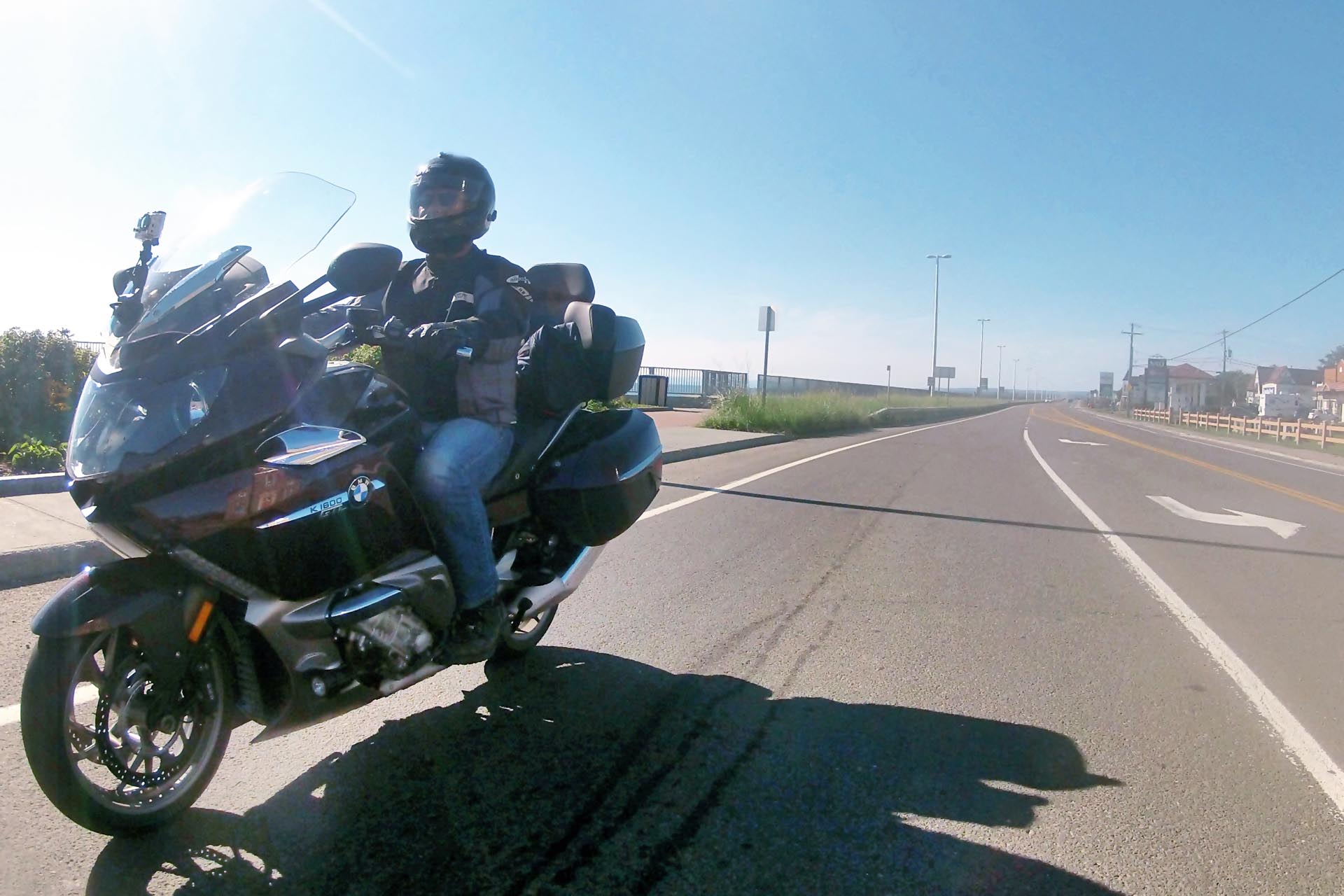 The road along the southern shore of the peninsula, opposite New Brunswick, is not exciting but it takes you to some pretty tourist beach towns. Rob and I rode in on it yesterday. He’s on a Beemer literally half the size of my tester and he got pretty wet in the rain.  I just raised the windshield and turned up the stereo.

I also turned up the heated grips and the temperature on the heated seat. Yes, heated seat. On a motorcycle. Riders used to decry the Gold Wing as a rolling sofa but this bike’s better than any sofa with its selectable heat, directable wind and delectable power.

Can all those -ectables really go together? They do on the BMW with one proviso: You’ve got to keep moving. The thing’s a baby at 10 km/h but a bitch at a crawl. All that weight, carefully tuned for both ton-up touring and hairpin negotiations, is felt when it’s time to put your feet on the ground, but keep them on the pegs and you’ll be fine. Maybe even wailing into a curve, as I am now.

I’m a little too confident because I’ve got traction control and adjustable shocks and everything’s set to Sport. Yesterday, they were set to Rain and Comfort respectively, but we passed through the wet weather and fields of the southern shore and made it to Percé Rock without incident.

(The last time I was on that stretch of road, I was riding a much smaller bike alongside my friend Dave. Dave can be a goof sometimes. He tried to overtake a marked police car on a double yellow and of course the cop pulled him over. The cop spoke no English; Dave spoke no French. I did what I could to translate and the cop laughed at me, waved us off and left. When I repeated the conversation later to a bilingual friend, she told me I’d said something about chocolate chickens. The lesson here is: Don’t overtake cops, and don’t let a complete lack of French stop you exploring Quebec. You might even find some chocolate chickens.) 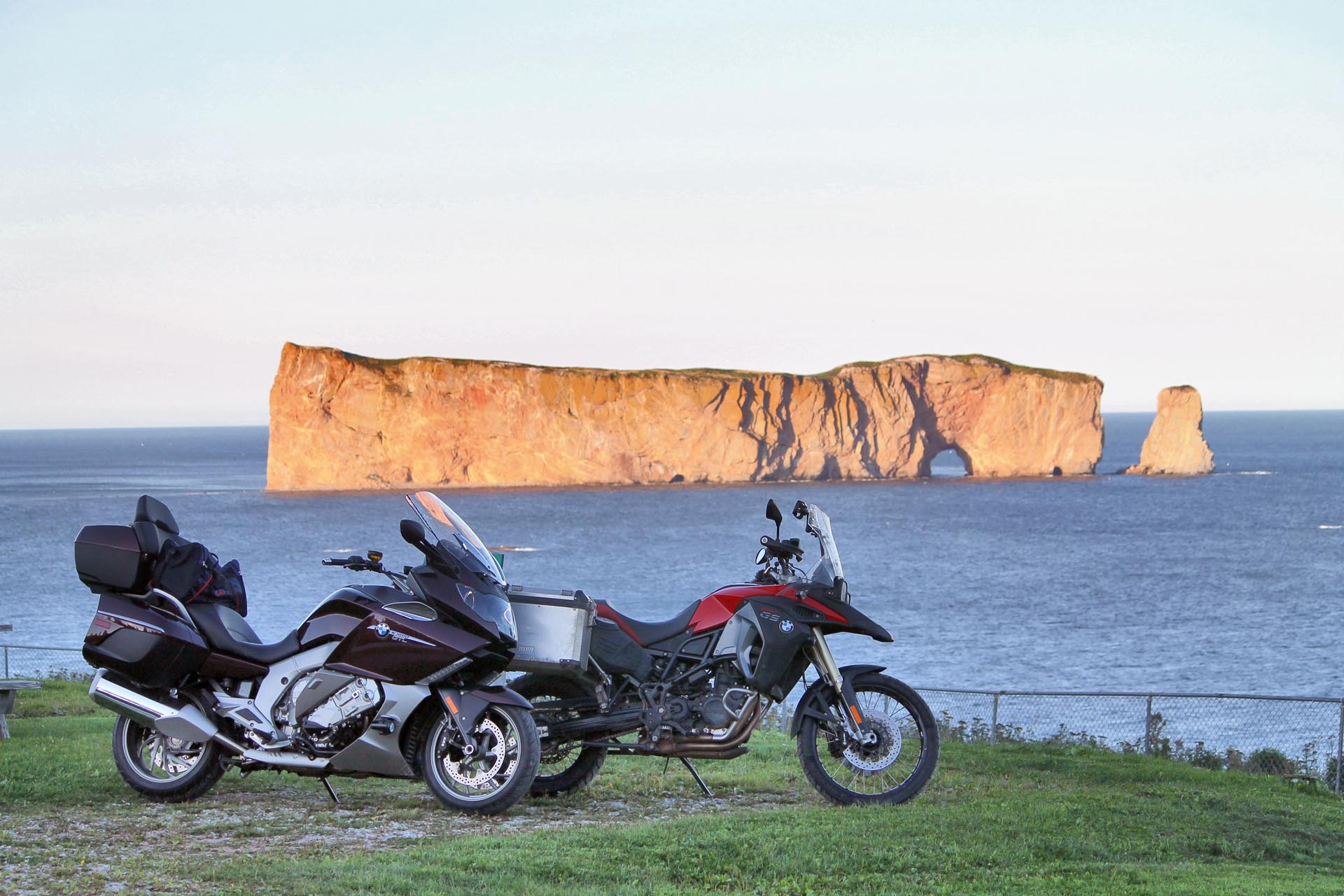 Percé Rock, with its flat top and distinctive hole at one end, is almost sacred to the Québecois. It’s part of a bird sanctuary that’s home to a quarter-million seabirds. Rob and I could have got into a boat and sailed over and walked around the rock, presumably dodging gannet poo all the way, but we stayed on shore instead and found a bar. We wanted to plan for today.

Really, we just wanted a beer. There’s not much to plan for a road trip around the Gaspé Peninsula. Just three things, in fact:

1) Do you want to cut through the woods from Gaspé to the mining town of Murdochville, before coming out on the shore near Mont-Saint-Pierre? Apparently, Hwy. 198 is an enjoyable road to ride or drive, but it’s not scenic like the road that sticks to the shoreline. So the answer’s No. Another beer, please.

2) Do you want to cut straight up through the trees on Hwy. 197 to the shore at Riviere-au-Renard, or ride an extra 35 km around Forillon National Park, hugging the shoreline to see the lighthouse at Cap-des-Rosiers? Duh! Next beer…

3) How fast do you want to ride? Duh again. Thanks Rob – I think these are on you.

The road changes dramatically just north of Percé on the way to Gaspé, whipping through rock cuts on the edge of the water. Gaspé itself is a good-sized port town of 15,000, last stop for a while for McDonald’s and Tims, and then we booted on over to the lighthouse. 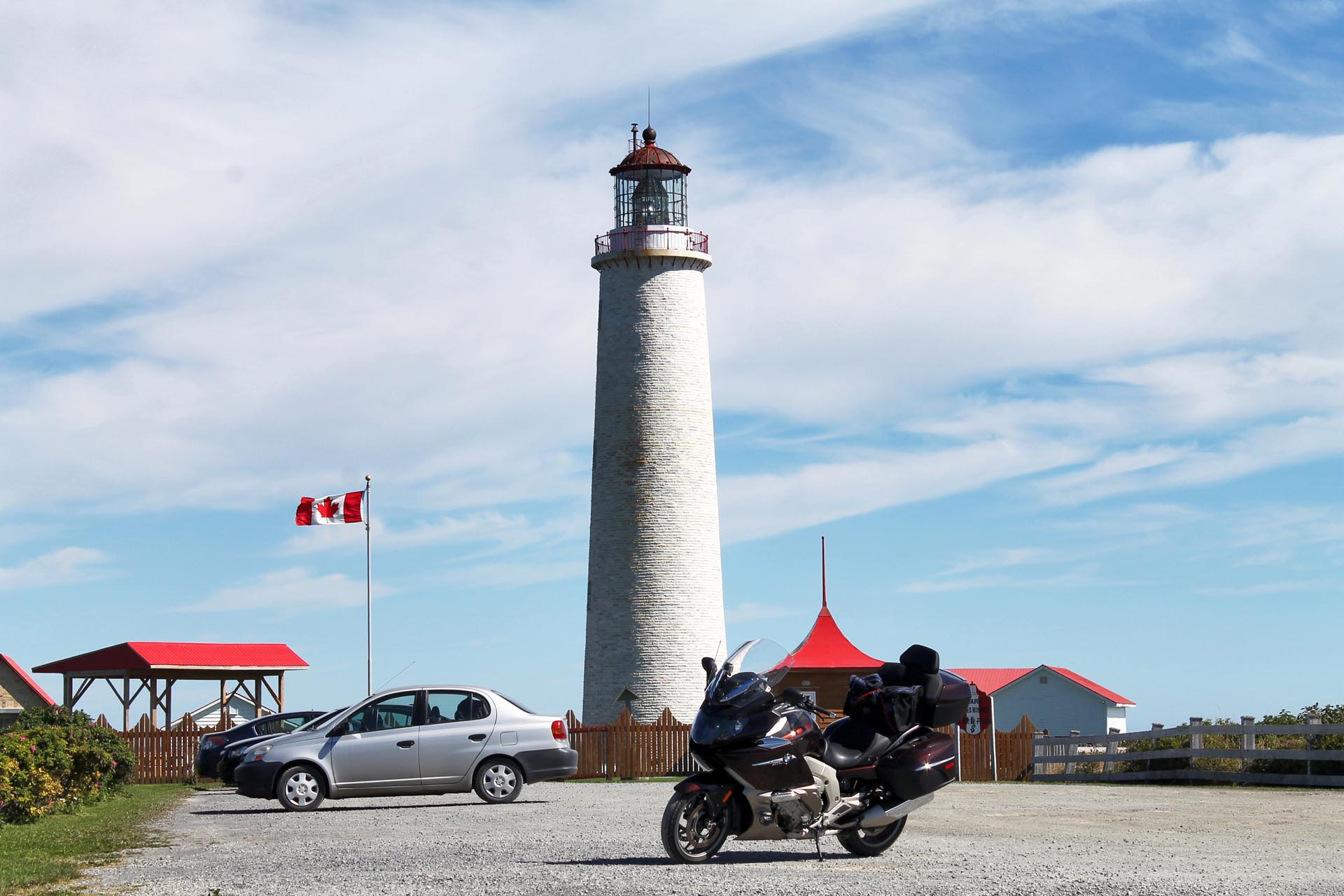 It wasn’t an easy ride, though. There was lots of construction, and several stages where the road was just large, loose stones. You’d never notice them in a car and Rob sailed through on his lighter bike, but the big K1600 GTL really suffered. The stones grabbed the front wheel and sent it every which way. I paddled my feet along the road at walking pace, white-knuckling the grips, and wished we’d chosen the shorter route through the trees.

And then the construction was over and the road was asphalt and all was forgiven. The lighthouse stood solid against the blue sky and we relaxed in the warmth. All was good. All was very good, because we knew the best stretch of road was ahead.

Hwy. 132 follows all of Quebec’s south shore of the St. Lawrence River, from its western border near Cornwall at the U.S. line, right out to Gaspé and back around to New Brunswick. Nowhere is it more beautiful and rewarding than on the 285 kilometres from this lighthouse to Matane.

The road literally hugs the shoreline, sometimes with nothing between it and the beach, and sometimes skirting small fishing villages. Often, the road goes right through the towns, and artisans and restaurateurs cater to the summer traffic. Sometimes, the road rises high above the water, cutting through the rocks to sanctuary. Officially, this is the mouth of a river, but there’s salt in the water, and whales, and the opposite shore is a hundred kilometres distant. 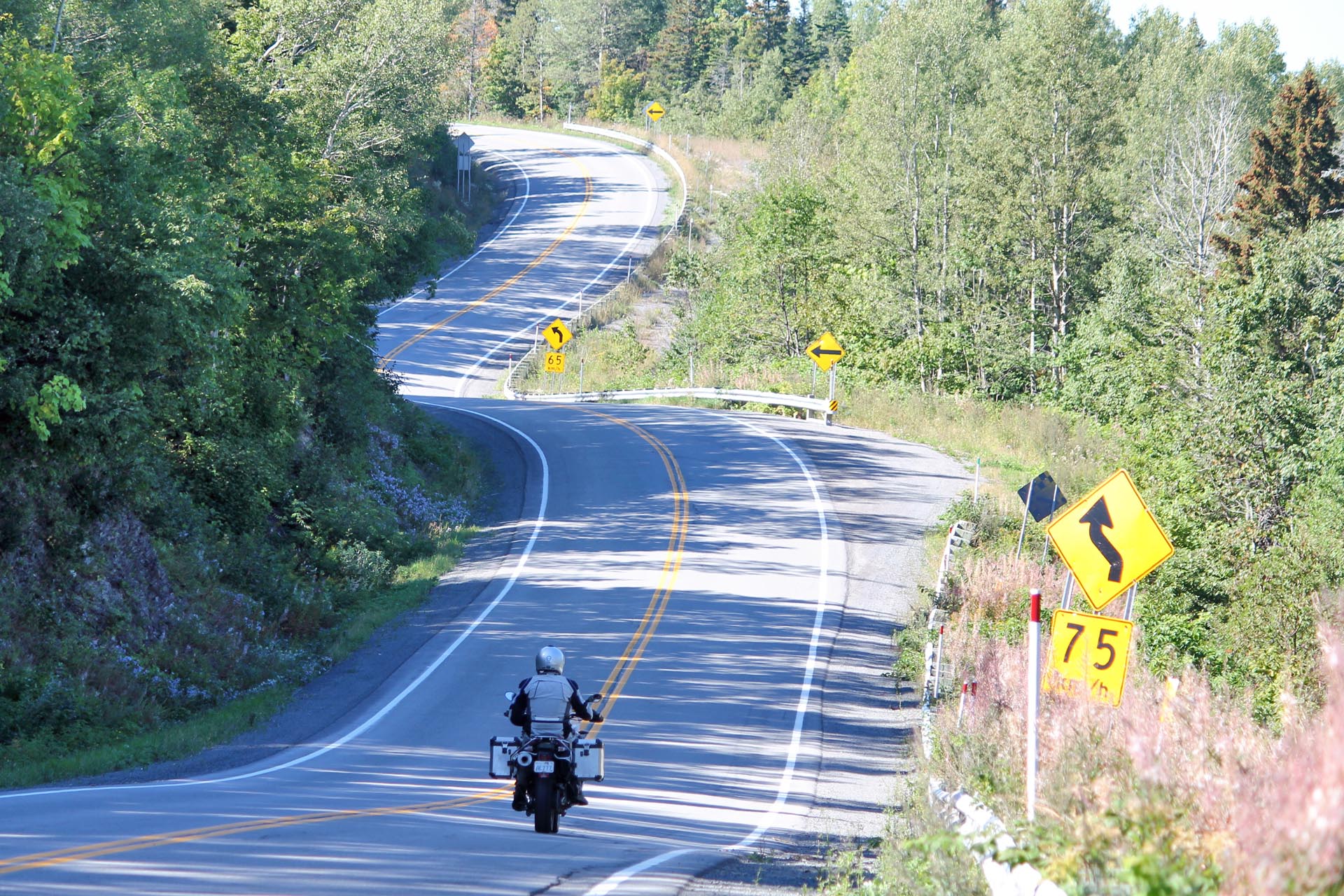 The asphalt’s smooth and well-cambered, with occasional construction that serves as much as a breather as anything else. It’s not a wild road cut from a cliff, but it’s full of curves and dips, with some wider stretches for overtaking. Not that we were bothered about overtaking – a motorcycle can pass in a moment when cars cannot. Our speed crept up to take advantage of the day.

And now I’m wailing into this curve, faster than the law would like and quicker than I’d have imagined on such a large machine. The windshield is tucked down and I’m looking as far up the road as I can, ready for the next turn. The bike leans over, touches a foot peg against the road at the corner’s apex, almost a salute or a handshake, then pulls back upright and sets up for the next curve, and the next, and the next.

There’s no need to go to Europe or California for a great riding road. One of the best is right here in Canada, missed by all those tourists heading down to Cape Breton’s Cabot Trail. Just keep heading east from Quebec City and you’ll know when you find it. And watch out for the chocolate chickens.

See more
Mark Richardson prefers driving over flying any day, and loves cars, trucks and motorcycles. The former editor of the Toronto Star's Wheels section and AJAC Journalist of the Year in 2010, he also writes books and is the author of Canada's Road.
Advertisement