Elvis Stojko is one of Canada’s top figure skaters ever – a decorated athlete who captured two Olympic silver medals, one at the 1994...
Advertisement

Elvis Stojko is one of Canada’s top figure skaters ever – a decorated athlete who captured two Olympic silver medals, one at the 1994... 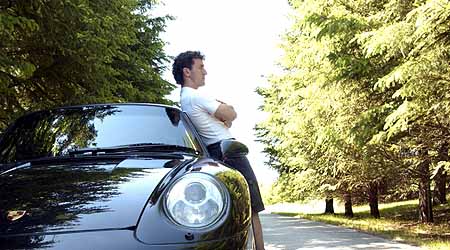 Elvis Stojko is one of Canada’s top figure skaters ever – a decorated athlete who captured two Olympic silver medals, one at the 1994 Lillehammer Games and the 1998 Winter Games in Nagano. The three-time World Champion hung up his stakes and retired from competition in 2002. Now, Stojko is shifting gears and pursuing his other passion: race car driving. The seven-time Canadian champ is racing in the Nissan Micra Cup Series at the Grand Prix de Trois-Rivières in Quebec, July 31-August 2, 2015 – it’s his debut in the series. On the track, he’ll be driving a souped-up Nissan Micra race car. On the road, he drives a 2013 Nissan Titan.

Petrina Gentile: “Why did you take up racing?”

Elvis Stojko: “Most of my life I’ve been involved in motorsports. I was riding motocross since I was a kid at the age of 7. I did Porsche club days and lap days and I fell in love with it. I always wanted to get involved in racing. Motorsports has always been a passion of mine. A few years ago I decided to start doing some karting – it was a great place to start learning everything in Mexico, where I was living with my wife. When I came back to Canada last year, I continued doing karting, but then more people heard about me driving and it unraveled from there.”

PG: “But you can’t make money as a race-car driver?”

ES: “Yeah you can! There are ways of doing it. If you can get up in the upper echelon. We’re going to prove that theory wrong. It’s something that I love to do. For me, it’s exciting.” 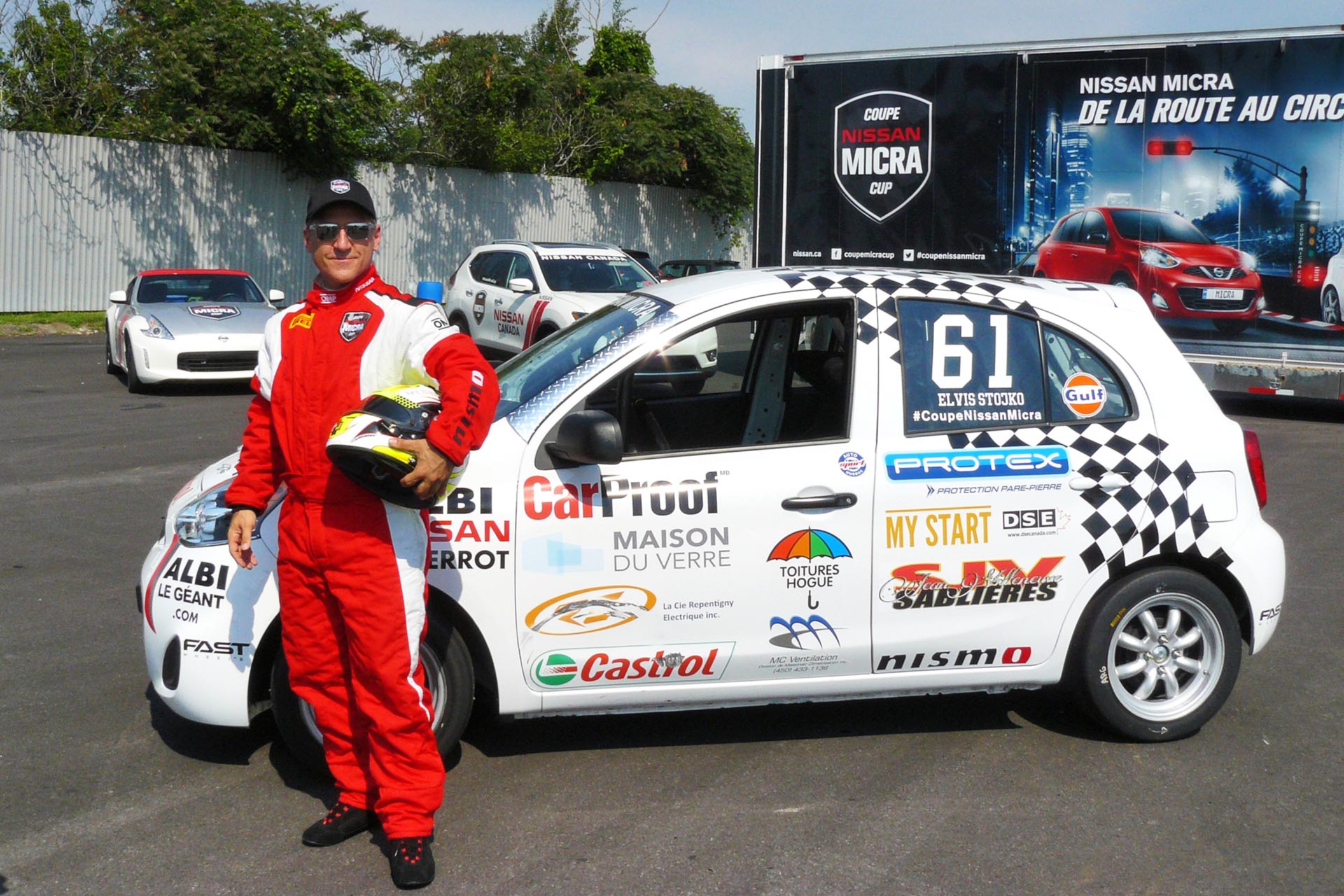 PG: “What’s so appealing about this series?”

ES: “This series is really cool because it’s affordable and it’s fun. It’s not high horsepower by any means, but with the super grippy slick tires, pretty good tuned suspension, a roll cage and the whole nine yards it’s a purposefully set up little race car. And it handles pretty good. Front-wheel drive cars are going to push anyways, but it’s a fun little car and it’s great for people who just want to, without spending oodles of money, get involved in a professionally run series.”

PG: “Are the skills needed for figure skating transferable to racing?”

ES: “For me, they are. The focus aspect is huge. Being consistent and constantly doing the same thing over and over and over again is super important. You’re scaling down and understanding your body and going through a motion and you’re breaking the skill down. You may be doing a different skill, but the discipline of going over it again and again until you get it mastered and then going to the next thing. That’s where my strengths lie in the ability to focus and do the repetitive training of it over and over until I get it and I’m good. What I love about racing is you’re constantly pushing the limit and then you realize there’s a little more. There’s always more. I always find more. That’s what is challenging and what I love about it.”

PG: “Any mishaps or accidents so far?”

ES: “There’s been a few accidents along the way – nothing super serious. I got pushed off the track, got spun out a few times, crashed into walls at the karts. I’ve always been pretty good about having my wits about me. But sometimes you can’t help it – it happens. It’s racing.” 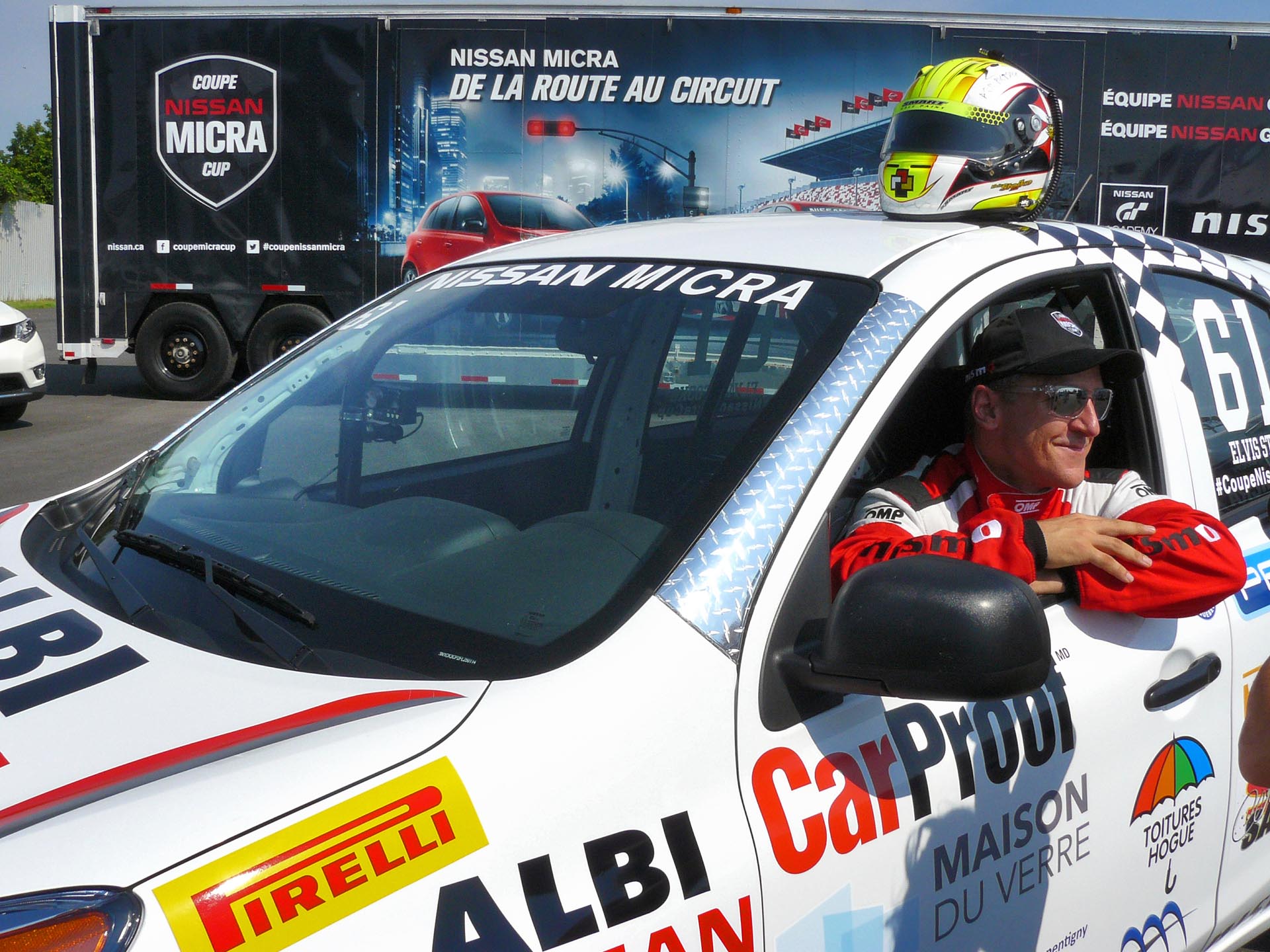 ES: “I’ve always had pickup trucks for winter and 4WD. When I was in Mexico I had Ram trucks because Dodge vehicles were made there so the price of parts and service was much cheaper so I went with that. But I’ve always loved the Titan. It was one of my favourite trucks… When we came back to Canada I bought one. I use it to tow my trailer to the track for karting. It handles really well even if you don’t have it loaded – it drives like a car so it’s nice and smooth. It’s way better on fuel than it used to be. Considering it’s a V8 and it has a lot of power, it’s quite good for towing and it’s not overly stiff.”

PG: “What does a Titan say about you?”

ES: “It says even though I’m a figure skater I’m still the rough-and-tumble Canadian outdoorsy kind of guy. I’ve got my trailer. I throw my dirt bikes in the back, my sled, all my camping gear. I love fast cars, but I love trucks to boot around in. It’s convenient. It shows I’m a guy’s guy driving a 4WD truck around.”

ES: “It was a 1988 Monte Carlo SS. I got it when I was 15. Then, I bought one of my favourite cars: a yellow Volkswagen Corrado VR6. I had it punched out. I had a supercharger, suspension – I did everything with that. I owned a really cool car in Mexico – a Seat Leon Cupra. It basically looks like a Golf with all the components of an Audi engine – it was a 2.0L turbo, 240 horse. Of course, I put a bigger turbo on it and boosted 400 horsepower to a front-wheel-drive car.”

“I’ve also owned a Porsche, but all my other cars were pretty much North American based trucks.”

PG: “You’re a gear head - are you mechanical too?”

ES: “Oh totally. No matter what was going fast, anything mechanical I wanted to modify it. I bought used dirt bikes, fixed them up, and then sold them. I modified them – I was rebuilding 2-stroke engines on dirt bikes when I was 12-, 13-years-old. For me, it was meditation. It got me away from the rink and it was totally different. If I wasn’t at the rink in the summer I was in the garage, wrenching and working on bikes and going out riding. That was my thing. I just loved it.” 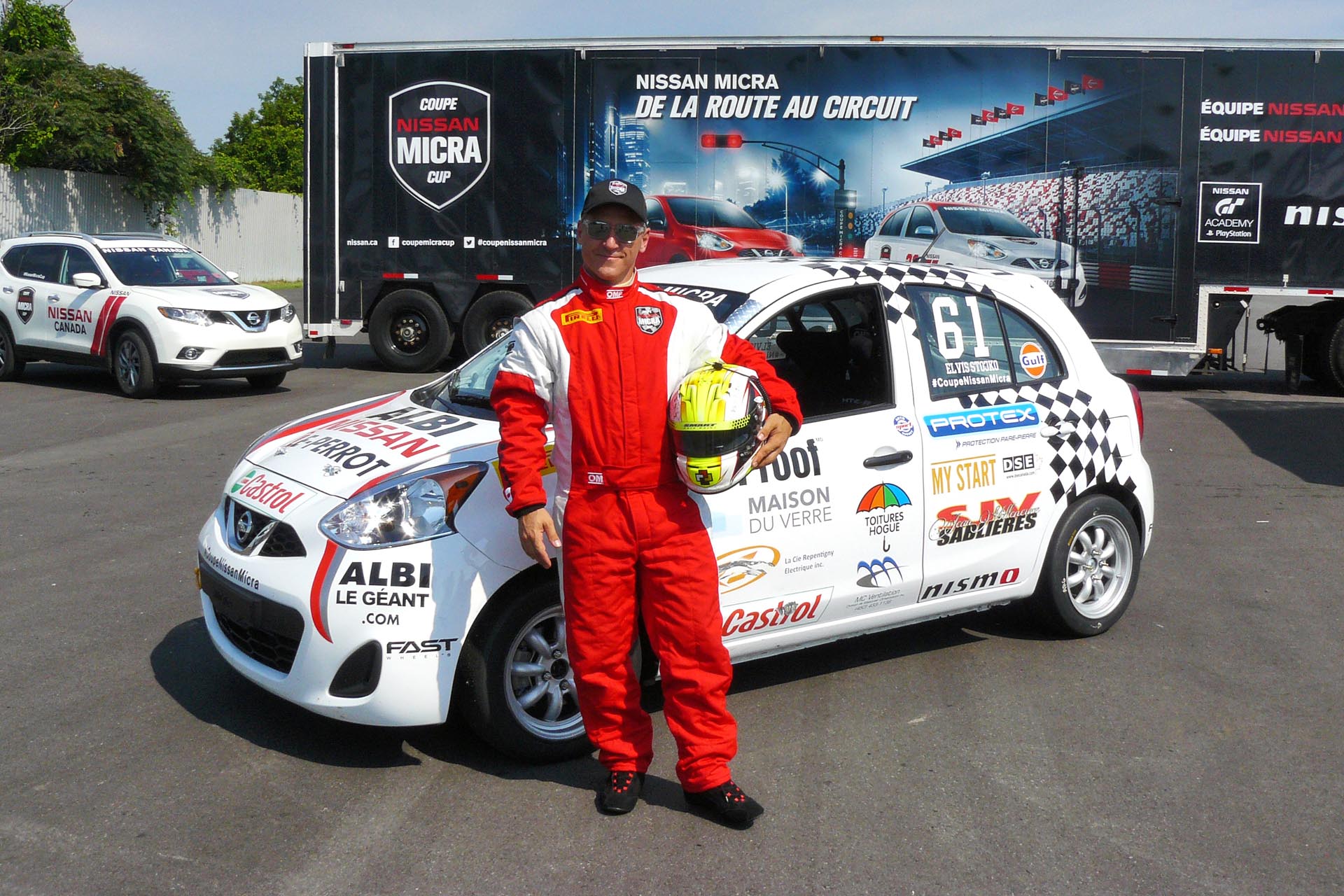