Some great options exist in a fast car that doesn’t scream “performance” – to your wife, or to your local law enforcement personnel.
Advertisement

Some great options exist in a fast car that doesn’t scream “performance” – to your wife, or to your local law enforcement personnel.

You want a car that’s speedy and awesome and will turn nearby motorists green with envy of its speedy awesomeness. But you need a car that doesn’t scream performance, fun and power to your wife, and your local law-enforcement personnel.

It’s a dilly of a pickle, as Flanders would say.

You could do the Flanders thing and go for a Geo Metro, foregoing any and all driving pleasure in place of all things sensible, cheap to run and reasonable. Then, you could put on a cardigan, watch some Matlock, and go to bed at 7:45.

Or, you could do the awesome thing, and find a fantastic sleeper: that is, a fast car that packs a big-time performance punch without looking like it packs a big-time performance punch. A car that flies under the radar, figuratively speaking. Here are five of our favourite stealth bombers, and a few pointers to help you find a good one from the used market, where applicable. 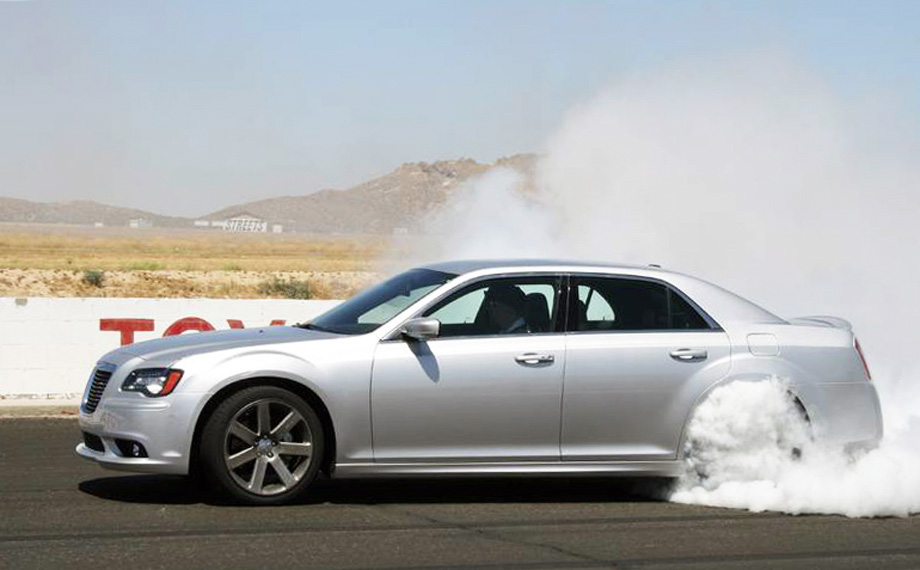 The Draw: This is the sleeper performance car of the Chrysler brand. The SRT-tuned Chrysler 300, both in its latest and former generation, got all of the hardware upgrades – including Brembo brakes, a fire-breathing SRT V8 HEMI engine with up to 470 horsepower, and a track-validated suspension calibration. Thing is, it got very few of the visual updates applied to the similar Charger, Challenger and Magnum SRT models. In fact, other than bigger wheels, some paint scheme changes, bigger exhausts and subtle vents in the front bumper to cool the brakes, you’d hardly tell the difference. So, 300 SRT is a luxurious cruiser on one hand, and a fire-breathing rocket-couch when nobody’s looking.

Buying Used: Opting for a newer used model is easy – just track one down from a Chrysler dealer with full service records, check for any outstanding recalls, and enjoy the remaining factory warranty for maximum peace of mind. On a first-generation model, confirm the lights, instrument cluster and audio system, including CD player, are working properly. Some owners have reported driveshaft issues, so feel the model you’re considering for any signs of unwelcomed vibration at various speeds and levels of acceleration. Note that any slippage, surging or flaring during gearshifts are signs of trouble, too. Have the older 300 SRT8 checked over fully by a Chrysler mechanic, with careful attention paid to consumable parts, fluid levels and the condition of the suspension bushings. Budget for a full tune-up and fluid change if service records aren’t available for maximum peace of mind.

Description: All hail its rip-snorting, fire-belching, family-hauling majesty, the E63 AMG. No family needs a twin-turbo station wagon that can haul from 0-100 clicks in less than four seconds with your kids and a load of shopping on board, but the E63 AMG isn’t about needs. It’s about turning premium unleaded into gloriously meaty sound effects, and blowing the doors of haters in high-performance sports coupes that laughed at your wagon when approaching it at a light, but shut up promptly when they saw the ‘Bi-Turbo’ badge on the side. That’s Benz-speak for twin-turbo, here applied to a 5.5L V8 for no fewer than 550 hp if you’re going with a newer one. Owning an E63 wagon is like owning a Bazooka: totally overkill, but there will be noise, combustion, and metal flying quickly through the air.

Buying Used: Simply, spend the money. If you aren’t going brand-new, find a low-mileage year-or-two old unit from a Certified Pre-Owned Program, add any extended powertrain warranty available (just in case) and start smiling. Badass wagons don’t get any more badass than this. 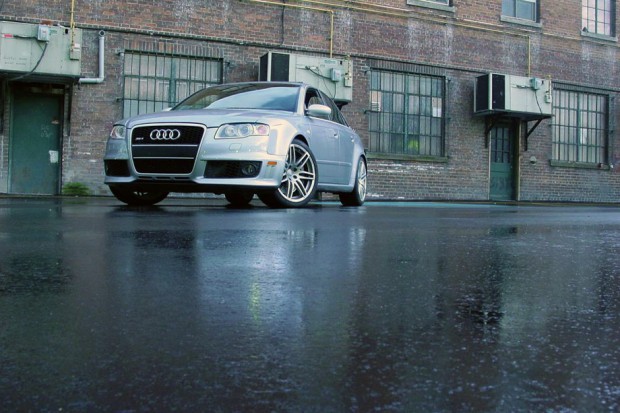 Description: This hundred-grand version of the Audi A4 packed a six-speed stick with long but tightly spaced gears that kept the 420 hp V8’s 8,000 rpm redline within striking distance. Quattro? Standard. Automatic available? No. Brake rotors? The size of trash-can lids. Deployment of maximum exhaust snortage at the touch of the legendary ‘S’ button? Very yes.

The rarest hardcore Audi small sedan was only sold here a few years, though used models are popping up for sale at a relative bargain. Best of all, in the RS4, only minor visual changes to the fender width, tailpipe size and badging gave the car away. To the unsuspecting, it just looks like the A4 driven by your average office secretary. That’s a good thing, if you’re not on good terms with your local radar cop. This is probably the ultimate all-weather sleeper sedan out there today.

Buying Used: After your test drive, arrange to have the seller meet you at an Audi dealer for a pre-purchase inspection with the car, or see if he’ll let you take it yourself. Ask for the engine’s codes to be pulled up, noting that a stored misfire code could be the result of gunked up intake valves. Have the dealer mechanic check the suspension system for signs of leaky shocks, and the PCV valve for a clog that could cause oil to burn up and blue smoke to come from the tailpipe. Ensure the lights and all on-board electronics work as expected, and remember that poor performance or an inconsistent, sputtering feel to the power delivery, possibly alongside a check engine light, could indicate a bad ignition coil pack. 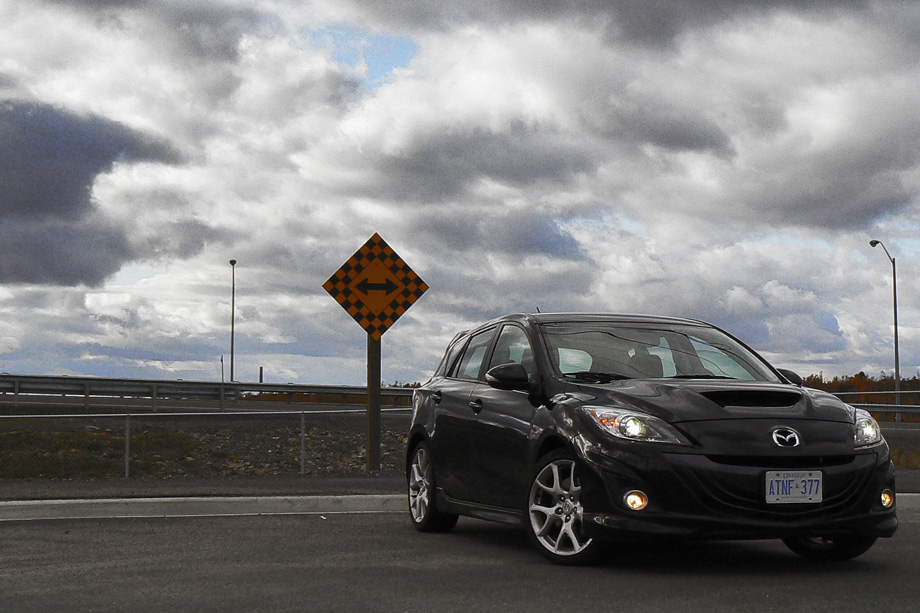 The Draw: Only a little badge and a little bit of a hood-scoop really set the Mazdaspeed 3 apart from its more modest, non-Mazdaspeed variant on the visual front. Though it’s packing big-time boost, heaps of power and a track-validated chassis and braking system, this frisky hot-hatch just looks, to most, like a sensible family wagon. Your wife doesn’t have to know it’ll lap a racing circuit with a smile on its face all day long. Plus, you get goodies like navigation, powerful HID lights and automatic climate control, depending on the model selected. All units got a 2.3L turbo engine pushing horsepower well into the mid-200’s, front-wheel drive, six gears shifted manually, and up-sized wheels and tires. Owners say this one hits the mark when it comes to discreet performance and a package that’s friendly for everyday use.

Buying Used: Pay extra attention to the condition of tires, brakes, suspension, the gearbox and the clutch, using a mechanic’s help if needed. Assume the former owner has cooked the consumable parts to living heck, and would love for you to pick up the replacement bill.

Note that earlier Mazdaspeed 3’s suffered from potentially weak motor mounts that were addressed in a recall. A Mazda dealer should be able to tell if the work was carried out on the first-generation model you’re looking at.

A loud metallic grinding noise from the engine compartment while the car is running may indicate a bad belt tensioner, which is annoying but not cause for serious alarm. Check for signs of turbocharger trouble, noting any oily white smoke exiting the tailpipe when the car is idling hot.

Blown engines weren’t unheard of in early, first-generation cars, though owner forums suggest this mostly happened under warranty at low miles, and especially in heavily-modified units. Avoid a model with extensive modifications where possible. If your budget allows it, a newer model with factory warranty remaining should be a confident buy. 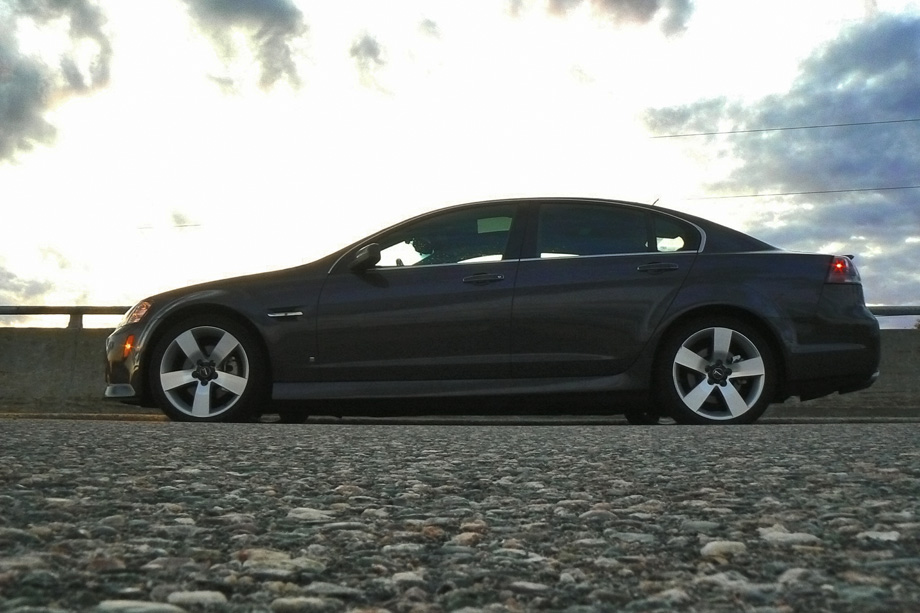 Description: This machine might be the most disappointing loss that came about as part of the Pontiac brand’s demise since a G8 GT is basically a four-door Firebird. When new, the premise was simple: shoppers could bring about $36,000 to their Pontiac dealer and leave with a brand new sedan stuffed with a 6.0L 361 hp V8 engine that spun the rear wheels. Look for features like a driver computer, Blaupunkt audio system, a sunroof, leather seating, automatic dual-zone climate control and all the standard power accessories. Remote start was available from the factory too. It might be trimmed on board with the sort of plastics you’ll find in your granny’s Tupperware cupboard, but owners love the slightly aggressive looks and the sporty cabin layout, but mostly, they love the performance that hits harder than this machine’s appearance suggests. The word ‘beast’ frequently comes up in owner reviews.

Buying Used: Once you’ve determined the stereo system is in good working order, switch it off and listen for popping, clunking, grinding or snapping sounds from the front end while travelling over bumps at various speeds and angles. Any unwelcome sounds likely mean a suspension component is worn out or in need of replacement. A well-documented problem with premature lower control arm wear resulted in a service bulletin-- so a GM dealer should be able to address the problem in quick order.

Unwelcome vibrations at speed could be caused by a faulty driveshaft, though this problem is also easily fixed. Other potential issues deal with engine control sensors that may cause lumpy power delivery, a sporadic idle or illumination of a check-engine light. All of the G8’s potentially common issues should be easy to spot and repair for a qualified mechanic.